The endless possibilities for summertime entertainment in Reston. 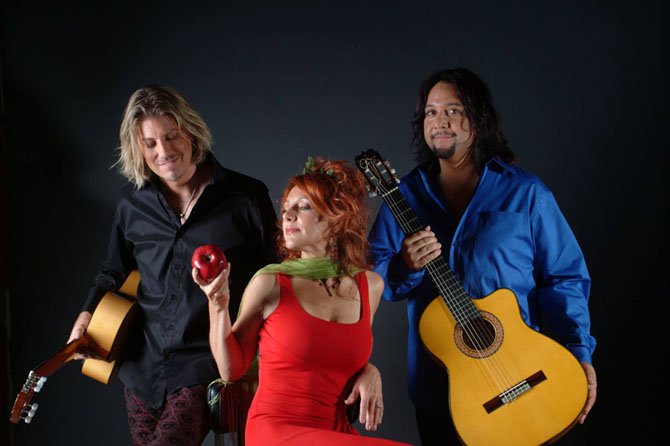 One of the many acts returning to this summer’s Concerts on the Town at Reston Town Center Pavilion, Saturdays from June 7 through Aug. 30 will be Incendio. The group, describing their sound as “world instrumental music” is heavy on the Spanish guitar and had the crowds last year pulling out all their Latin dance moves. The musical series will feature bluegrass, reggae, jazz, R&B, classic rock, and even a Beatles Tribute band – Hard Day’s Night – that will open the season. Photo Contributed

After a long, cold and snow shoveling-filled winter and a wet and windy spring, Restonians and their neighbors are ready for some summer fun! The endless possibilities for summertime entertainment in Reston are even on the international radar. Sven Malikson comes every year from Norway to visit his brother who works for a local IT company. “Of course I come in the summer,” said Malikson. “We have our own winter, but here there is so much to do in the summer and such good weather. Sometimes when we visit, I never get far from Reston itself.” Foremost on Malikson’s summer agenda is attending as many of the Reston Town Center (RTC) Concerts on the Town in the Pavilion as he can. “They are great. High quality performers, the sound in the pavilion is great and I like that the people get up and dance.”

There will be plenty of opportunities for locals and visitors alike to boogie a bit to that music. This year’s Saturday concert series, starting on June 7 and running through Aug. 30, will feature a number of high-energy acts providing something for just about every musical taste. Things get started with the Beatle’s tribute band, Hard Day’s Night. Jambulay brings their mix of calypso, r&b, reggae and soca stylings. The award-winning, Virginia-based Jackass Flats offers Bluegrass, and Incendio, with their latin/flamenco fusion “instrumental world music” will no doubt have the crowd just as fired up as their name means and as they did at last year’s performance.

There will be one break in the Concert Series this summer, but there will still be plenty of live music, food, fun and activities. The annual Taste of Reston takes over the town center on Friday, June 13 and Saturday June 14. Sponsored by the Greater Reston Chamber of Commerce, this event keeps getting bigger and better each year. Voted the “Best Food Festival in Northern Virginia” by Virginia Living Magazine in 2013 and 2012, the event features three stages of live music, and fitness and cooking demonstrations at the Main Stage at the Pavilion, and stages at the corner of Market and Explorer Streets, and at Library and Market Streets. The band Turtle Recall, comprised of South Lake High School graduates, will make a return appearance at the Main Stage on Saturday, from 3:30 – 6:30.

AS PART OF THE FESTIVAL, the Reston YMCA and the Chamber of Commerce will once again sponsor the Family Fun Zone with activities, interactive games, demos and arts and crafts from noon – 6:30 p.m. on Saturday, June 14. Carnival rides will no doubt attract thrill seekers of all ages. And don’t forget the food – since that’s what the Taste is all about. No doubt last year’s First Place winner, Hooked Seafood and Sushi, will by vying to take the crown again among the twenty restaurants preparing to tempt your taste buds and win your vote.

There’s lots more going on at RTC this summer. Plans for this year’s Independence Day celebration have yet to be officially announced, but we know the day will start with the Firecracker 5K For the Troops, sponsored by Potomac River Running of Reston.

As fabulous as all of the events will be at Reston Town Center, they don’t hold a monopoly on all of the Reston fun. There’s a lot going on at Lake Anne, as well. The hosts of the award winning Saturday Farmer’s Market and the Arts and Crafts extravaganza have lots more in store for your summer entertainment. Boat rentals have already begun. “Who needs that long drive to the beach with a car load of kids?” asks Marian Lynch of Reston. We start at the markets, then we all enjoy some water time on the lake.”

The popular Thursday evenings “Take a Break” live music series, sponsored by the Reston Community Center, is also back this summer at Washington Plaza at Lake Anne, from 7 – 9 p.m. What could be better than dinner on the patio while listening to Bluegrass from the Barretones, who open the season on June 12. Other acts include the New Orleans Jazz/Funk band, Dixie Power Trio, a retro Rat Pack evening with the Chaise Lounge, and some traditional Irish music to cap off the season on Aug. 8 with the Dirty Pints band. More live music is on tap on Friday nights in the Plaza, as well. From 7 – 10 p.m. diners and visitors can enjoy the sounds of emerging artists in the summer Fountain Notes series.

And if you sometimes feel a bit nostalgic about those summer nights at the drive in, Lake Anne’s Summer Film Festival on the Plaza is here once more to bring back those happy memories. Grab your lawn chair and head on down on the second Sunday of the month through Sept. 14 for some outdoor big screen viewing.

And let’s not forget two returning and wildly anticipated events – the 5th Annual Ukulele Festival on July 12 and the 8th Annual Lake Anne Jazz and Blues Festival on Aug. 30.

Getting a bit giddy yet from all these entertainment choices? Well hang on to your sunblock and visors, ‘cause there’s even more to choose from at other local venues.

Lake Fairfax Park, off of Baron Cameron Road is open daily from dawn to dusk. Already offering 476 acres of outdoor fun with fishing, the Water Mine Swimmin’ Hole with tubing, a tot pool, slides, and tunnels, a carousel, boat rentals, picnic areas, trails, skatepark and even camping, the park is going one giant step further in family fun this summer. On July 26 they will host their very first Pirate Fest, from 10 a.m. – 6 p.m. A rain-or-shine event, the Fest celebrates Virginia’s seafaring past. There will be

a pirate/nautical costume contest, activities to experience the life of a sailor first hand, an exhibit of 18th &19th century world trade goods, and – most exciting of all – a pirate Boat Tour with a cannon!

Lake Fairfax also offers several week-long day camps for the young ones, like their Catch Some Fun and Sun camp for 3 – 5 year olds and the Digital Kidz Weebotics camps for ages 4 – 6 where youngsters build basic robots using Legos, record custom sound effects, and engage in other activities that make developing STEM skills (Science Technology, Engineering and Math) a whole lot of fun.

And what about right around the corner from Lake Fairfax? On Hunter Mill Road you’ll find the Reston Zoo. OK. Technically the zoo is located in Vienna, but with that name and location, it can still make the list of Reston summer destinations, especially since the Zoo will be having weeklong Junior Zookeepers camps in July. For ages 7 – 12, the “zookeepers-in-training” will work with real animal care staff, keepers and a veterinarian technician, with special behind-the-scenes activities every day.

Not done yet. There’s still the myriad of events and activities sponsored by the Reston Association and the Walker Nature Education Center from Stream Sloshing (for a nominal fee, wear your wellies or waders and clothes suitable to mud!) where you can explore the lifecycle of a frog and check out the other inhabitants of our moving waterways, to more adult entertainment, like Wine Tastings at the Center. There’s just too much going on there to list, so you will just have to check out their calendar at www.reston.org.

So, Restonians, neighbors and visitors from around the county and around the globe, are you all ready for a rompin’ good time in Reston this summer? Enjoy!