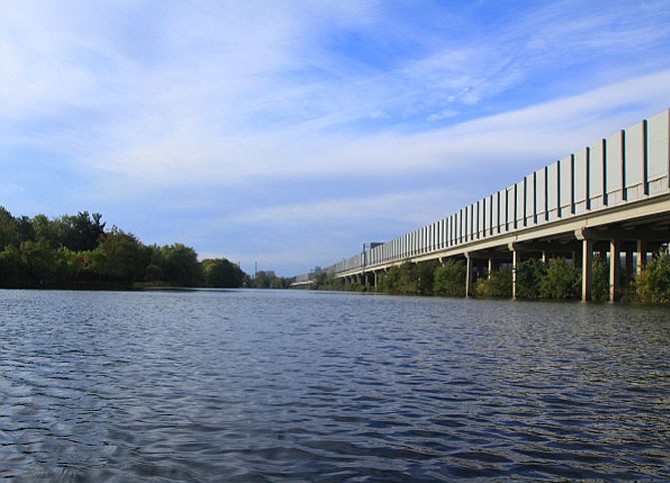 On the north side of Cameron Run across from the Riverside apartments we decide to take a few minutes to explore a series of adjoining tunnels that go under the beltway into what Google Maps indicates to be Hooffs Run and Four Mile Run on the same stream. On the south side of the tunnels we peer in and see the light at the opposite end. The tunnel goes under all lanes of the beltway and looks to be about the length of a football field. We decide to go on through.

Upon entering the tunnel, it becomes dark as night and one can only see where there is light at either end of the tunnel . You cannot see the walls of the inside of the tunnel or even much of the kayak itself as you paddle ahead. The light at the far end is all that you have to guide you and keeping focused on the light and the bow of the kayak centered on the light helps to maintain your course without running into the now invisible walls on your left and right. It is eerily quiet in the tunnel considering that perhaps 10 feet above your head are hundreds of vehicles rushing north and south in the evening rush hour. The only noticeable sound is that of the paddle slicing into the water as you push ahead toward the light. Gradually, visibility of your surroundings returns as you near the opening on the north end where light is again penetrating the space of the remaining stretch of the tunnel. Emerging on the other side we see that the Run continues northward past the Alexandria waste water treatment plant and beyond perhaps as far as the Alexandria National Cemetery. We consider going ahead to see how far we can penetrate but decide to save it for another time sensing that the sun is setting and we have a way to go to get back to Huntington Park. So it is back into the darkness and eerie silence of the tunnel. I am thinking to myself that this is one sure way to safely cross all lanes of the beltway during peak rush hour.

Approaching US 1 crossing during rush hour.

On the final stretch of our return along the bank adjoining Huntington Park we come upon a man seated in a lawn chair and fishing. We inquire as to whether he has had any luck and what kind of fish he is after. He informs us that he is after whatever is biting and says he usually lands catfish, bass, perch and an occasional snakehead fish. He then tells us that seeing us moving easily about on the water gets him to thinking about getting a kayak so that he could fish other areas of the waterway off limits to him. There is no access to the bank on the other side. We told him that this time of the year is a great time to find a second-hand kayak on the online garage sale internet site called Craigslist. Both Lee and I purchased ours that way and there are plenty of good second-hand kayaks that are very affordable listed on this web site. We bid the man good luck and good evening journeying ahead. Perhaps one day when we take to these waters again, we’ll see him in his own kayak fishing the far side or in some otherwise unreachable cove along this waterway.

A very short distance ahead is the place where we had put out to begin this adventuresome afternoon. There was still enough light left at 6:30 p.m. that we could see what we were doing. Of course being out for over three hours left us a little fatigued from the exercise. Having been in pretty much the same position since heading out so many hours ago has led to stiffness in the ankle, knee and hip joints as well as some in the lower back. We look over the spot from where we originally entered the water and ponder the best way to get back onto the land at the top of the bank above our heads. We both realize that entering the kayaks was challenging enough when we were fresh and limber but exiting the kayaks, being tired, stiff and sore is about to be an even greater challenge. If ever there was anything ungraceful, I would have to say, following our experience, it would be two elderly gentleman getting out of kayaks on sore wavering legs, standing in two to three feet of water with a soft muddy bottom and grabbing onto a piece of utility pipe that is attached to a concrete storm water trough. We have to pull ourselves up using all of the strength in our arms to get the additional three feet to the top of the bank. Not exactly a pretty sight and I couldn’t help but noticing the fisherman watching us in the distance and perhaps chuckling at our circumstance to his amusement or maybe thinking to himself that a kayak is possibly not the way to go after watching us struggle to get back on the top of the bank. In spite of gravity’s pull and the encumbrances of age, we extracted ourselves with much effort from Cameron Run and we’re able to bring the kayaks to the top of the bank and return them to the kayak roof rack on our vehicle.

Hooffs Run tunnel under the beltway.

Upon returning to my home and unloading my kayak, I talked with my friend Lee and we agreed that it was a great time out and that we would, in spite of the difficulty entering and exiting the waterway, do it again before winter sets in. We wish to explore the waterway reached through the tunnels and some of the channels in the marshes of Hunting Creek. I asked my friend to send me some of the photographs he had taken during our adventure so that I might use them to accompany an article I’m now planning to write to let other people in the Mount Vernon area know of an as yet little known and underutilized natural resource area that can serve a wide range of recreational interests. I think perhaps this extraordinary place has an image problem as it is most often spoken of in the context of potential flooding to the nearby Huntington community. Lee agrees that the place holds great potential and writing about and showing the place with photographs may help change a negative image to a more positive one, getting more paddle sport enthusiasts to try these waters as we had this beautiful Fall day.

Maybe in time, more people looking for the kind of fun, adventure and enjoyment that we experienced will visit this place as we have and will themselves realize what a hidden gem to have right in the midst of a rapidly developing urban environment. As more people visit this site and see the true potential value, perhaps people will also start asking about the Fairfax County efforts to address and find solutions to the problems of solid waste plastic containers and bags along with the more sinister and hidden storm water pollutants plaguing this waterway due to outdated storm water infrastructure in much of this region of the Mount Vernon District.

Later at home, I investigate the Huntington Community Association website to see if there is information regarding this resource. Primarily, there are topics related to issues surrounding the flooding this locale is well known for. There is mention of the need for more recreation opportunities needed beyond the playground tot lot, baseball field and flat grassy areas but no mention of utilization of Cameron Run.

Out of the darkness from under the beltway.

The citizens in the south portion of the Mount Vernon District have public waterfront access at three different facilities in the Lorton area. There is one at Pohick Bay Regional Park, another at Occoquon Regional Park as well as one at Mason Neck State Park. I have visited all of these places this past year and they are very well used and appreciated by the citizens fortunate enough to live in this area. The only other public access to water for recreation between Lorton and the City of Alexandria, in the Mount Vernon District, is at the Belle Haven Marina next to the George Washington Parkway between Belle Haven Park and Dyke Marsh. This is another very nice facility that serves an even more populous area than the south portion of the district.

Creating more opportunities for recreational access in and around the expanding developments of the Eisenhower Valley and Metro Station and the Huntington Avenue and Metro Station makes the greatest sense given that metrics on population show that zip code 22303 in the Huntington area has a 2013 population of 14, 497 and that by 2040 the same zip code is projected to have 25, 260 people.

A floating dock with some stairs is a small investment for the FCPA or for Fairfax County to afford for its citizens to have such an expansive area opened up for greater public use. There is consideration to link up the pedestrian and bicycle paths coming from the Eisenhower Valley and following Telegraph Road to Huntington Avenue to follow the shoreline of the south side of Cameron Run to the east to join up with the pedestrian and bicycle trail that is on the east side of U.S 1 at the U.S. Route 1 bridge. From there one can walk or bicycle over the Cameron Run and Hunting Creek crossing to the George Washington Memorial Parkway linking to the Mount Vernon and National Harbor pedestrian and bicycle trails. That makes sense but I can’t help but to wonder how long before such plans are implemented. Perhaps now is the time for Mount Vernon citizens to pressure the FCPA and Fairfax County to address the already acknowledged need for more recreation opportunities in this district that we will all benefit and leave a lasting legacy for future generations in what will surely become an urbanized area of south Alexandria and north Mount Vernon.