Fairfax voters to determine the fate of flood mitigation along Cameron Run. 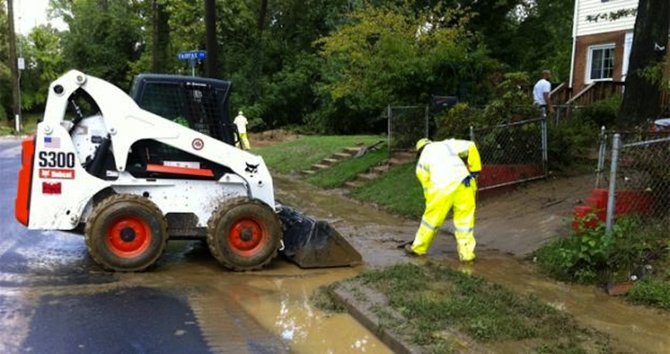 Several storms have caused massive flooding in the Huntington neighborhood.

Everyone in the neighborhood near the Huntington Metro station has a story. Pregnant women rescued by firefighters in rafts. Waste-deep water. Mold. Mildew.

“The water comes from both directions,” said Ana Funes, who lives on Arlington Terrace. “It comes from the street, the sewers, and it comes from the back. So it's the worst watching it. You see the field get filled with water, and you see fish and stuff coming this way.”

Fish. Debris. And ruin. In the last few years, this part of Fairfax County has been hit hard — multiple times. Back in the 1970s, Hurricane Agnes caused major flooding in Huntington. Then in 2006, county officials declared 160 homes uninhabitable after a major storm. Neighborhood residents were hit again in 2011, when another major flood evacuated the neighborhood yet again.

“It’s easy to pass over the headlines, oh, 200 houses flooded, neighborhoods evacuated, because you don't see it again the next day,” said Jeff Hoekstra, who estimates that the 2011 storm cost him about $15,000. “But the reality is I just finished up repairs from the last flood, which happened in September.”

NOW THAT SUMMER is approaching, people are concerned that another flood may be on the way, perhaps even more devastating than the last. Those fears came flooding back last weekend, when severe weather caused major problems throughout the region. Mount Vernon District Supervisor Gerry Hyland said the neighborhood was staffed by officials from the Fairfax County Police Department, Fairfax County Fire Department and Office of Emergency Management.

“We would hope that we wouldn’t have the same problem, but there’s no guarantee of that,” said Hyland. “We don’t have a silver bullet that’s going to keep a whole bunch of water out of that community absent a levee.”

For years, growth and development have contributed to the problem. For example, Cameron Run was rerouted when the Capital Beltway was constructed. And several developments in Fairfax County have added impervious surfaces that have increased the flow of water during heavy rain events. Residents in Huntington say the county’s gain has been at the expense of their neighborhood.

“The things that have caused the flooding for Huntington have been very good for Fairfax County,” said Alan Ruof. “They've made sense. They've produced wealth and prosperity. But, boy Huntington has really paid the price, and we need help.”

HELP MAY BE on the way. This November, voters in Fairfax County will consider a $30 million bond referendum to build a levee along Cameron Run. That’s a goal that was outlined by the Army Corps of Engineers to solve the problem back in 2006. But nothing happened. That’s why the 2011 flood created so much frustration in Huntington.

“People here are frustrated, upset and distraught,” said David Coon shortly after the 2011 flood. “The county has basically dropped the ball.”

This November, voters in Fairfax County will have the final say. A $30 million bond referendum will be on the ballot to construct the levee originally constructed by the Army Corps of Engineers back in 2006. Hyland compares the situation to Hurricane Irene, saying voters in Louisiana would recognize the importance of spending money to make sure New Orleans is not wiped off the map. Ultimately, though, a majority of voters will need to approve the referendum to get the money.

“This is only going to pass if outreach is done, particularly by the people who are directly affected,” said Hyland. “They are going to have to work to inform voters of this, and obviously I will do that through my office.”