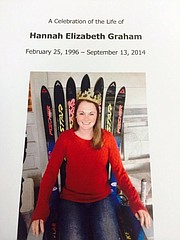 Members of the UVA ski team came to Hannah Graham’s memorial Nov. 15 to share memories of the West Potomac alumna.

West Potomac softball coach Craig Maniglia knew Hannah Graham starting when she was seven years old, through being her coach on the varsity softball team. He was one of 17 speakers at a closed memorial for Graham in the West Potomac High School auditorium on Nov. 15.

“It was quite an event,” Maniglia said. “It left you feeling sad, but upbeat, that this young lady had so much and did so much in her short time here.” Roughly 1,000 people came to show support and reflect on Graham’s life.

Ellis “Tuck” Bowerfind, Rector at St. Luke’s Episcopal Church in Alexandria, moderated the memorial that included stories and fond memories from high school and college friends of the UVA sophomore, former teachers, members of the UVA ski team and Graham’s parents John and Sue. John’s parents had flown over from England to attend.

“The memorial was for them,” said Maniglia, “for everyone who knew Hannah to reminisce, and try to move forward.” In addition to speeches, the coach said there was a slideshow of photos from when Graham was an infant and the West Potomac band played a short program.

West Potomac Director of Student Activities Aaron Helmick planned the memorial, with help from Fairfax County Police and Fire and Rescue Departments. “The whole plan was to make it a special event,” Helmick said. “I’ve always felt West Potomac is a community school: When one of us hurts, we all hurt.”

Outside the school, a police motorcycle motorcade honored Graham. 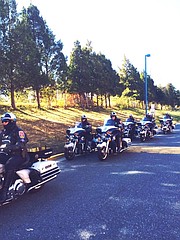 “Our agency worked closely with the police departments investigating her death and Fairfax County Public School personnel,” said Fairfax County Police Department spokesman Lucy Caldwell, “to ensure that her memorial service would be a safe, smooth event for her all those who wished to help honor her memory and her life.”

Graham had been missing from UVA’s campus since Sept. 13, before her death was confirmed Oct. 24 when the Virginia Medical Examiner's Office and Albemarle County Police Department linking her to human remains found on abandoned property in southern Albemarle County.

On Nov. 18, the Albemarle Police Department released a statement that the Office of the Chief Medical Examiner determined Graham’s death to be a homicide: “homicidal violence of undetermined etiology.”

“Words can’t really describe how outrageous this is that something like that would happen to somebody of this caliber,” said Maniglia. “It was very emotional, but made you feel good about Hannah, in lieu of the tragic events that are going on.”