Fairfax County History Conference Focuses on the War of 1812
Votes

Fairfax County History Conference Focuses on the War of 1812 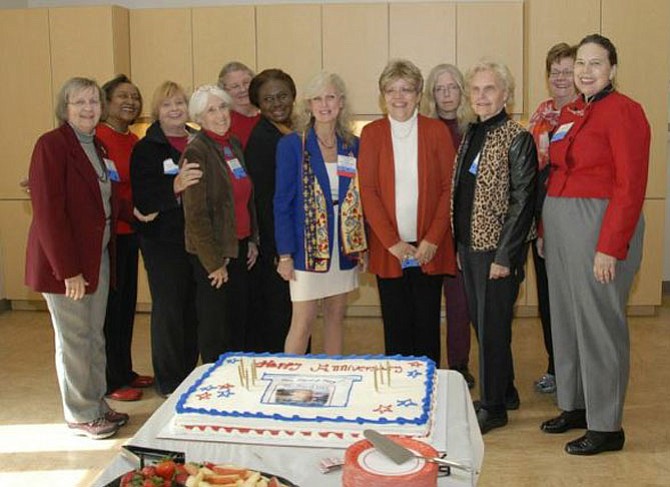 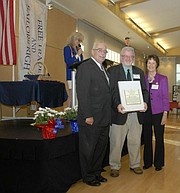 The 10th Annual Fairfax County History Conference was held on Saturday, Nov. 8 at the Stacy C. Sherwood Community Center in the City of Fairfax. A record 120 participants were in attendance to enjoy the theme of “Fire, Flight & Fury” – The War of 1812 in Fairfax County – 200 Years Later.” Over 15 authors and exhibitors attended and the day was filled with much living history, including the re-enactments of Dolley Madison by Carole Herrick, an 1812 Naval Commander by Michael Bosworth, an 1812 60th Virginia Militia Man by Richard Orli and a grand finale of Francis Scott Key by National Park Ranger, Alan Gephardt.

Guests included Virginia State Del. Ken Plum (D-36), U.S. Rep. Gerry Connolly (D-11) joined with Fairfax County Board of Supervisors Chairman Sharon Bulova to share comments and to present awards to local historians who had contributed to document and preserve the history of Fairfax County during the recent past.

Conference Committee members, Mike Irwin and Esther McCullough produced War of 1812 Timeline which was included in the attendee packets. Michael Bosworth shared song and verse as a way to share both information and demonstrate how the naval armed service members attended to their tasks. He reminded us that the War of 1812 was really part of the larger war called the Napoleonic Wars. A Trivia question for the audience was “Why was the War of 1812 Overture written & by whom?” Only a few attendees were aware that Peter Ilyich Tchaikovsky wrote the overture in 1880 to honor the Russian victory over the attempted invasion by Napoleon. Trivia prizes included CD’s of Keynote presenter, Ron Maxwell from the county’s first History Conference in 2004. Richard Orli reminded the audience that in 1812 Fairfax County was a much smaller county than the state’s largest county at the time, Loudoun county. He also shared that the militia men who served in the War of 1812 often provided their own uniforms – due to shortages of buttons, wool cloth and red cloth. He also stated that over 300 axes were ordered to slow down the British progress to capture the United States Capital, but they unfortunately never arrived. Carole Herrick quietly shared the “post script” reflection of Dolley Madison’s flight into Fairfax County while protecting George Washington’s portrait – and saving the beautiful red velvet drapes from the White House. Alexandria Carlyle House Curator, Helen Wirka, provided insight into the Battle of Bladensburg focusing on the key players including the brothers Winder: Levin who was the governor of Maryland and William who was the commander of the defenses of Washington and Baltimore during the War of 1812. Patrick O’Neill provided an enthusiastic and fresh perspective on “The Battle of the White House” – which was actually a location near present-day Ft. Belvoir (not the Presidential mansion). Alan Gephardt shared that the inspiration for the lyrics to “The Star Spangled Banner” was really the defenders of Ft. McHenry – the soldiers. His passionate rendition of all three verses of the original “Defence of Fort McHenry” brought the audience to tears.

It is the custom of the Fairfax County History Commission, to present Annual Awards to citizens who have given of their time and talents to create a document or media presentation that serves to preserve and protect the history of Fairfax County. Awards presented at the beginning of the conference and presented by U.S. Rep Connolly and chairman Bulova included: