Afternoon with the Madisons
Votes

Afternoon with the Madisons 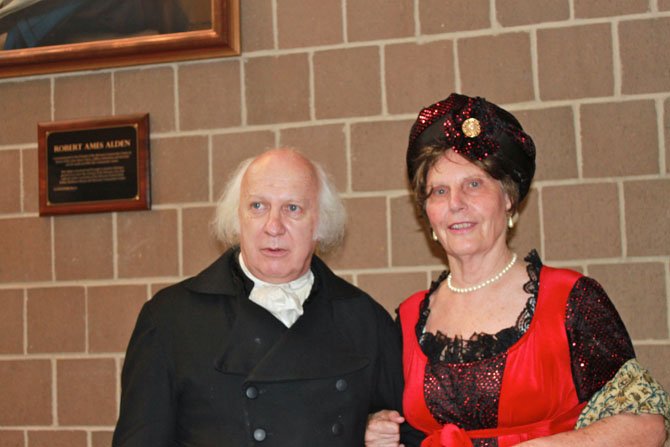 Dressed in the high fashion of the early 1800s, Carole Herrick and John Douglas Hall spoke eloquently about the War of 1812 as if it happened yesterday.

Interactive play “An Afternoon with the Madisons” was shown exactly 200 years from the date that British soldiers set Washington D.C. ablaze to give locals a history lesson at the free event at McLean Community Center’s Alden Theater Sunday.

McLean residents packed each of the 370 seats in the theater to learn about how James Madison and his wife were scrambling around McLean and other parts of northern Fairfax County to save the nation’s important documents, artifacts and paintings.

James Madison, played by historical performer Hall, and Dolley Madison, played by M&GFCV co-chairman Herrick, spoke several monologues to the audience as if they were guests at Montpelier, recounting their perspectives of the three days surrounding the attack on the nation’s capital and the inspiration behind Francis Scott Key’s “Star Spangled Banner.”

“If any of you believe Mr. or Mrs. Madison fled through your neighborhood 200 years ago, you might consider applying for a historical marker,” said Mudd jokingly.

One of the artifacts famously saved by Dolley Madison was an iconic portrait of George Washington that currently hangs in the White House’s east room.

Herrick as Mrs. Madison recounted how she was so sure the British would be driven away by the American militia that she began preparing a 40-guest victory feast as she packed her bags to flee the president’s house.

“I was so sure of our militia,” she said.

With James Madison fighting with the generals and the militia, she changed her mind about the outcome of the battle when she heard the Americans were ordered to retreat. Because she had no other way out, she had to cross the chain bridge out of the nation’s capital, a frightening experience.

“I could only hope you inform your children’s children about my accounts today,” said Hall.

McLean resident came to the event to learn more about her community’s history.

“They summed it up so well by stating that we know so little about the war of 1812,” she said. “It was our second war with the British, and it really helped us with our standing as a world power after.”

McLean resident Sue Christie came to support her friend Herrick, talking about the M&GFCV co-chair’s knowledge about McLean’s place in the war.

“I was surprised because I somehow thought the war was longer than it was,” she said.

The sponsor group also presented a new award, the Henry C. Mackall award, to Roger Mudd for his dedication to historical education and preservation in the community.

“Patriotism surfaced after the burning of the city, after the signing of the treaty,” said Herrick. “Before that, we were separate states, but after, we became a nation.