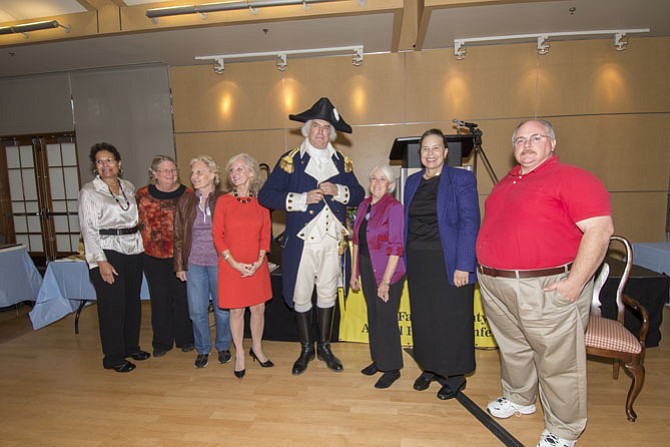 Board of Supervisors chairman Sharon Bulova kicked off the conference that was attended by more than 100 guests and filmed by local Cable Channel 16. Guests included authors and exhibitors: the Burke Historical Society, the BRCWRT, the Fairfax County Cemetery Preservation Association, Chuck Mauro, Chuck Mills, Carole Herrick and many, many others.

An overview on the Fairfax Families and George Washington was provided by the Jenee Lindner. Steve Bashore talked about Mount Vernon’s farm and distillery. He had to leave quickly return to Mount Vernon in order to oversee this season's preparation of Rye Whiskey, still in process today.

President George Washington was able to join as well. Guest historian Helen Anderson shared a minuet with the general. As one guest stated, “Virtuoso performances by Dean Malissa (The General George Washington) and Marion Dobbins.”

General Washington talked about “E pluribus unum” - a sentiment truly much noteworthy in this day and time. Marion Dobbins re-enacted an 18th-century freed African American woman and in the telling gave us serious insights to her own seventh-generation Fairfax County heritage and the cold, lonesome world of a former slave.

Katrina Krempasky provided an excellent overview of the journey of the wills of George and Martha Washington before being carefully returned to Fairfax County.

A Trivia Quiz throughout the day kept everyone on their toes and a special five-year return from veteran historian Nadine Mironchuk from Chelsea, Mass. was honored. All attendees received a copy of “In the Path of History” authored by Ross and Nan Netherton and Ruth Rose.

A new addition was the “Drop & Swap” book table which had, at its height, 30 books and was whittled down to three by the conference’s end.

The conference for 2016 is tentatively set for Nov. 12, 2016 at the Sherwood Community Center in Fairfax. “Fairfax County’s Founding Fathers Part II” will a focus on George Mason.