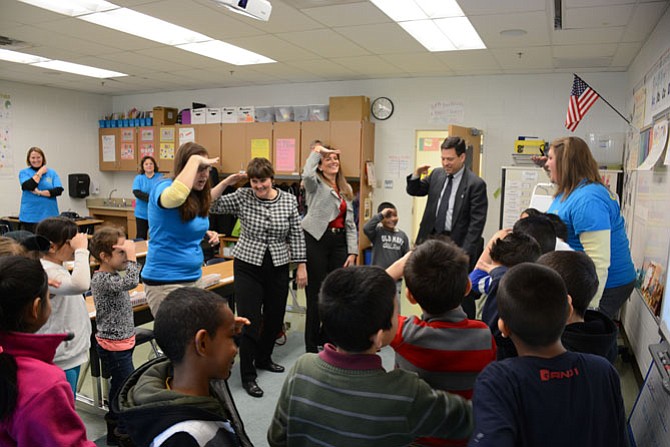 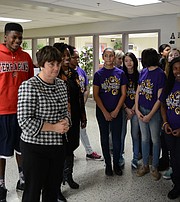 Virginia Secretary of Education Anne Holton (left) asks Walt Whitman Middle School students what they like about school, positive feedback she can take to other schools around the state about what’s working there.

The students were joined in the ensemble on Nov. 21 by Virginia Secretary of Education Anne Holton, Fairfax County Public Schools (FCPS) School Board Chairman Tammy Derenak Kaufax and 44th District Del. Scott Surovell. When the students sang “Canoe Song,” Holton pantomimed rowing and chimed in, telling the students afterward it was a song she learned at camps in her youth.

Holton has been touring schools in Virginia, from Petersburg to Portsmouth, soliciting feedback from educators to help with reforming the Virginia Standards of Learning (SOL) assessment. Surovell invited Holton to come to Mount Vernon as well.

“I wanted to make sure they received input from northern Virginia,” he said. “People fall into the trap of thinking just because Fairfax County has good scores overall, it means all the schools have students who are thriving and that’s just not the case. We have a significant cluster of them in the 44th district so I wanted to make sure our schools considered as part of the process.”

Earlier in the fall when the Virginia Department of Education released its 2013-2014 report cards for all state schools, FCPS dropped five percent in schools receiving full accreditation based on performance objectives in English, math, history and science. West Potomac and Mount Vernon high schools, as well as several elementary and middle schools, were accredited with warnings for not meeting all of the objectives.

The SOL testing doesn’t take into account, however, student mobility and turnover rate, percentage of the student body receiving free and reduced lunch, or whether a school has passed students on to gifted and talented centers or Advanced Placement classes that don’t take SOLs.

“What’s important is how they’re helping children to grow, to improve,” said Surovell. “How can we measure that, as opposed to where they are at any point in time?”

Kaufax agrees with Surovell about needing a more comprehensive assessment. On the tour of Hybla Valley, which had its accredited with warning status lifted, she said “SOLs are just one data point. It’s great to have [Secretary Holton] out to see the success that’s going on here.”

Despite having a Title I level of poverty, Hybla Valley Principal Lauren Sheehy, Ed.D., attributed their success to a solid curriculum, behaved learning environment and purposeful movement around the classroom and building.

“We're definitely proud of what we do,” said Sheehy, “and appreciate and recognize other schools could benefit from the things we do here.”

Holton was impressed with the behavior and engaged instruction she saw in several classrooms.

After Hybla Valley, Holton’s tour continued to Walt Whitman Middle School, which was accredited with a warning by the state. Its mobility rate is first in Fairfax County, according to Principal Jean Bell, owing in part to being 23 percent military. And 56 percent of students receive free and reduced lunch.

Bell acknowledged the school is struggling with math and reading, but highlighted their writing process and literacy initiative, among programs that are already affecting a performance turnaround.

“I felt that [Secretary Holton] heard our concerns,” said Bell, “and she can see that we're not a failing school even though we're accredited with warning. We're making progress.”

Surovell said he’s optimistic about Holton addressing the SOL reform task. “Everyone I spoke with is very impressed and excited about her ability to try and come to some fair and practical solutions to get our accreditation system focused on the right measures.