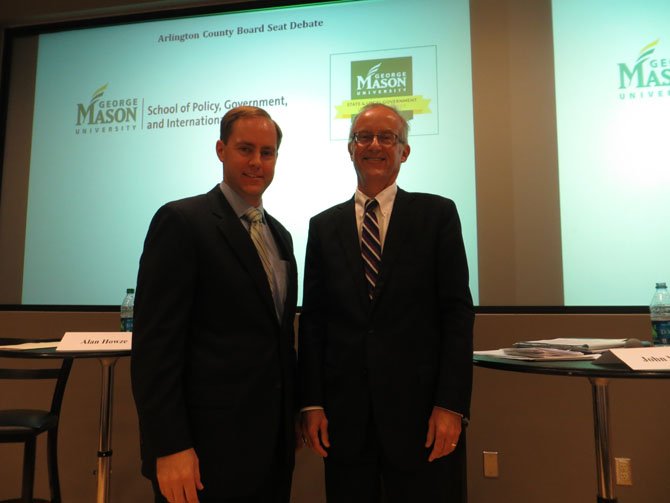 Arlington County Board candidates John Vihstadt (Independent) and Alan Howze (Democrat) have similar stances on many of the city’s issues. Both candidates have expressed strong support for Arlington’s public schools, preserving public parks and maintaining Arlington’s affordable housing, but the opinions diverged dramatically when a Sept. 29 debate between the two candidates at George Mason University’s Arlington Campus brought up the Columbia Pike Streetcar proposal.

The planned 7.4 mile streetcar system would run between Skyline Towers Apartments in Fairfax to Crystal City, much of it along Columbia Pike in Arlington. According to a study commissioned by the Arlington County Board, the construction of the route would cost $250 million, though estimates by the Federal Transportation say that number could swell to nearly $400 million.

“It’s not just about serving the needs of the community today. We need to be looking 10 or 30 years down the road on these investments." — Alan Howze

largely credits public sentiment against the project for his victory over Howze in the April special election. His election marked the first time a non-Democrat sat on the board since 1999, but the Howze campaign hopes the upcoming election can put the question of the streetcar to rest.

“For me, this campaign comes down to this: who has vision for Arlington?” said Chris Raleigh, campaign manager for Howze. “The streetcar is going to bring in $3 billion in growth and it’s going to reduce Arlington’s carbon footprint.”

The streetcar proposal has sharply split public opinion, even within the ranks of the Democratic Party. Division over the streetcar has already resulted in the resignation of one county board member, Libby Garvey, from the Arlington Democratic Party. Many of the advocates at the debate from the anti-streetcar organization Arlingtonians for Sensible Transit identified themselves as Democrats.

“It’s part of a discussion on priorities,” said Peter Rousselot, former chairman of the Arlington County Democratic Committee and leader of Arlingtonians for Sensible Transit. “We need to focus on funding the core services like schools, roads, sewers, and core functions.

According to Howze, many of the criticisms of the streetcar are short-sighted and misleading, particularly the allegation that the streetcar development is sapping funds from other core government functions. Up to half of the design and construction costs for the streetcar are paid by a state grant that must be applied towards transportation and infrastructure.

“It’s not just about serving the needs of the community today. We need to be looking 10 or 30 years down the road on these investments. One half of the tax revenue for Arlington comes from businesses in the community that built up around the blue line,” said Howze, adding that the streetcars will carry a higher passenger capacity and will be a cleaner transportation source for the city.

In particular, Howze emphasized the positive effects of the blue metro line on Arlington business.

“Shirlington has no streetcar or metro and is a healthy business center, whereas Rosslyn, with its three metro lanes, still faces 30 percent office vacancies.”— John Vihstadt

But according to Vihstadt, comparisons between the streetcar and metro are disingenuous.

“What is a 7.4 mile streetcar line from Fairfax that ends abruptly at Potomac Yard compared to the network of an interstate metro?” asked Vihstadt, referencing Alexandria’s withdrawal from the streetcar development. “What other transport projects are sacrificed?”

Vihstadt insists he is not against mass transit and cites his daily commute on the metro as evidence. His alternative to the streetcar would involve modernizing Arlington’s bus network, which would cost an estimated $73 million and would offer greater flexibility than the fixed rail streetcar and could offer more regional connectivity.

A report by HR&A Advisors, commissioned by the Arlington County Board, said the areas around the streetcar’s route could see a 65 percent increase in population growth and a 44 percent increase in job growth. Overall, HR&A projected $3.2 billion to $4.4 billion in growth over the next 30 years.

However, the conclusions of the HR&A’s report are being challenged. In a presentation to the County Board, Garvey expressed concerns regarding the validity of the report’s comparisons. The report used data on the efficiency of light rail systems with high speed dedicated lanes, while the Arlington streetcar would not have a dedicated lane. The HR&A report’s claim of large economic development gains from the similar Portland streetcar system, but this claim is disputed by the National Academy of Sciences’ National Transportation Board.

“Shirlington has no streetcar or metro and is a healthy business center, whereas Rosslyn, with its three metro lanes, still faces 30 percent office vacancies,” said Vihstadt. “If transportation alone were the solution to our economic trouble, we wouldn’t have those vacancies.”

Following the debate, Vihstadt and Howze remained behind to speak with audience members about issues facing Arlington, each facing several questions from the opposition regarding mass transit.