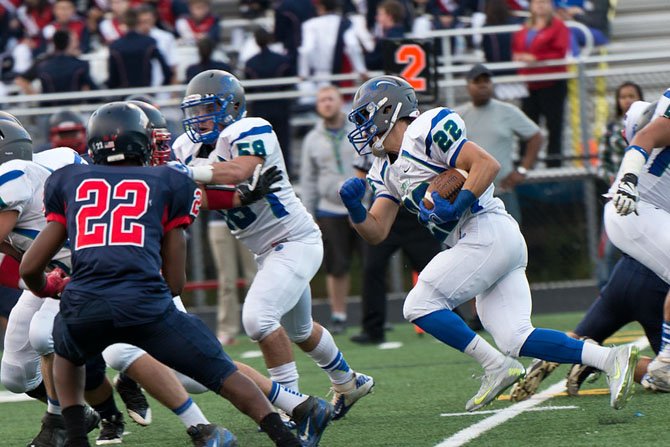 Churchill running back Andrew Zuckerman (22) ran for 110 yards and a touchdown against Wootton on Sept. 19. Harvey Levine

Marquette Lewis totaled 44 yards of offense and hauled in a 35-yard touchdown pass against Wootton on Sept. 19

The Churchill football team was protecting a 14-point lead late in Friday’s contest when Bulldogs running back Andrew Zuckerman took a handoff and plowed his way through the Wootton defense, shaking off a forceful collision on his way to a 27-yard insurance touchdown.

Zuckerman’s powerful push into the end zone excited the Churchill sideline, and No. 22 was greeted by someone yelling “That’s a man’s run!”

Zuckerman’s display of strength put the finishing touch on the Bulldogs’ 35-14 victory over the previously unbeaten Patriots on Sept. 19 at Wootton High School. The victory improved Churchill’s record to 3-0, avenged last year’s 41-0 loss to Wootton and further proved the Bulldogs have bounced back from a dismal 2013 campaign in which they finished 1-9.

Churchill is not only winning, it’s doing so in dominant fashion. The Bulldogs have outscored opponents 115-14, and did not allow a single point for the first 10-plus quarters of the season. Churchill opened the season with a 39-0 victory over Bethesda-Chevy Chase, and followed with a 41-0 win against Walter Johnson.

“Most of us played last year, so we know what it feels like to lose,” senior receiver/defensive back Oumar Soumah said, “and now it feels like redemption time.”

What are the keys to Churchill’s turnaround? Offseason team-building activities helped bring the Bulldogs together, and plays like Zuckerman’s 27-yard touchdown run have set a tone of physicality.

“We’re not terribly big, but we’re physical,” said head coach Joe Allen, head coach of a team with a roster so small it refers to itself as “The Dirty 30.” “We’re just a lot more physical and as a team we’re a lot closer than we were last year.”

Churchill made plays in all three facets of the game. Offensively, the Bulldogs amassed 194 yards and two touchdowns on the ground. Zuckerman led the way with 15 carries for 110 yards and a score. Blake Dove carried 11 times for 67 yards and a touchdown.

Quarterback Colin Smyth completed 6 of 11 passes for 88 yards and a score. His 35-yard touchdown pass to Marquette Lewis gave Churchill a 28-0 lead late in the second quarter. 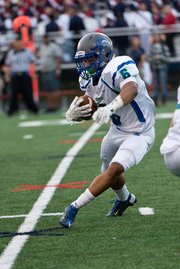 Churchill running back Blake Dove carried 11 times for 67 yards and a touchdown during a 35-14 win over Wootton on Sept. 19.

Defensively, Soumah returned an interception for a touchdown, giving the Bulldogs a 14-0 lead with 4:26 remaining in the second quarter. Defensive back Paolo Tranquill totaled 12 tackles, while linebacker Dove and defensive back Elliott Sloate each had nine. The Bulldogs forced three turnovers.

Churchill limited Wootton quarterback Sam Ellis to 4 yards per attempt. He completed 22 of 48 passes for 190 yards and was intercepted once.

Wootton running back Dean Spitz’s 1-yard touchdown run with 7:13 remaining in the third quarter marked the first time an opponent had scored against Churchill this season.

“I was a little mad we gave up our first points — anybody would be mad,” Dove said, “but we bounced back.”

Churchill even scored on special teams. The Bulldogs partially blocked a Wootton punt late in the second quarter, and Soumah scooped up the loose ball and raced 38 yards into the end zone.

“Oumar is a kid that probably is our most improved player,” Allen said. “Last year, he didn’t hardly play at all. He’s another kid that worked extremely hard in the offseason and we were expecting big things out of him. He’s kind of been dormant for the last two games, but I told him, as a matter of fact, this week that he would probably have a big game and he did. He stepped it up on all three phases of the game.”

While Churchill is off to a hot start, things figure to get tougher for the Bulldogs. Churchill’s next two games are at home against Paint Branch (Sept. 26) and perennial power Quince Orchard (Oct. 2).

Only time will tell what Churchill does against tougher competition. As for now, the Bulldogs are undefeated — a far cry from last year’s 1-9 record.

“These seniors wanted to avenge last year’s season, so to speak,” Allen said, “and so far, so good.”