I-66 Inside the Beltway Plans
Votes

I-66 Inside the Beltway Plans

Officials present transformation plans for the eastbound section from I-495 to Route 29 in Rosslyn. 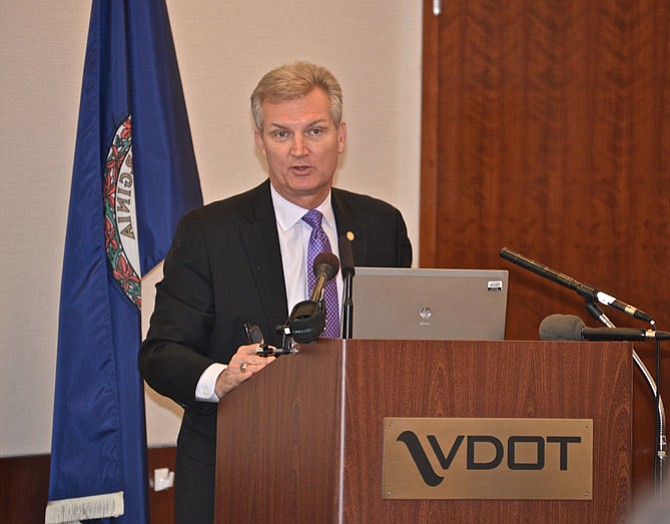 Virginia Secretary of Transportation Aubrey Layne launches the I-66 Inside the Beltway Multimodal Improvements Plan Kick-Off at the Northern Virginia District VDOT offices to a full house, of staff members, other transportation experts and administrators, elected officials and the media on March 12. Photo by Andrea Worker.

Virginia Secretary of Transportation Aubrey Layne headlined the “I-66 Inside the Beltway Transformation Project Kick-Off” briefing on Thursday, March 12 at the Virginia Department of Transportation’s (VDOT) Northern Virginia District office. The audience included officials and staff from VDOT, the I-66 Project Team, the Virginia Department of Rail and Public Transportation (DRPT), Fairfax County Board Chairman Sharon Bulova, other Board Supervisors, delegates Jim LeMunyon and Rich Anderson, representatives from the offices of U.S. Representatives Connolly and Comstock, as well as representation from Arlington County, Prince William County, the City of Falls Church, the Town of Vienna and members of the media.

There have been numerous public hearings, roundtable discussions and outreach events to engage the public in the plans for improvements to I-66 from the Capital Beltway west to Haymarket, but this was the first time that information was publicly presented on the transformation plans for the traffic-clogged eastbound section from I-495 to Route 29 in Rosslyn. “Drivers traveling on I-66 inside the beltway face serious delays in both directions,” said Layne. “And it’s no longer just at rush hours,” he added. “I got to experience it on my way here.” The meeting, by the way, began at 1 p.m.

“Bus service and other transit options face connectivity challenges and are greatly impacted by this…unreliability,” he said. He noted that it’s obvious that more non-eligible drivers are traveling the HOV lanes during the restricted hours, further adding to the congestion. “We need to take action. This project will be expensive and require creative funding options. Improving these conditions is going to take a transformation of the entire I-66 corridor, and it’s going to take more than one solution.”

Supervisor Pat Herrity (R-Springfield) has a point to make before the start of the meeting. During the Q&A session, Herrity expressed some mixed feelings about the proposals being presented, wondering if the problem if I-66 congestion can really be solved without widening the road.

Layne enumerated a few of those solutions. Tolling is proposed in both directions during rush hours. Vehicles with three or more passengers would travel for free during those times, while others would pay the toll for the lane use. The lanes would remain free to all traffic outside of peak times. Charles Kilpatrick, Commissioner of VDOT, continued outlining some of the proposed changes, including the conversion of the HOV Lanes from two people per vehicle to three, dynamic toll pricing to manage demand and abolishing the clean fuel exemptions. “The goal is traffic harmonizing…taking all the pieces and creating a flow of traffic…avoiding the ‘slinky’ effect of traffic that speeds up and then comes to a sudden halt.”

CURRENTLY, the schedule calls for tolling construction to begin in 2016 and be operational, along with other components of Group 1 of the multimodal solutions by late 2017. Admitted Kilpatrick, “It is still undefined as to what is part of Group 1, or 2, or 3.” The parties involved are still at work on grouping the various portions of the project and will be re-evaluating the 2012 Traffic and Revenue Study as part of the process.

Kilpatrick brought up the controversial topic of roadway widening, part of the I-66 Outside the Beltway plan that has seen some backlash from citizens and businesses as it would require a number of property relocations. “There will be studies on the possible future widening of I-66 inside the Beltway, but doing that would be enormously challenging and costly,” he said. The plan for now is to try and stay inside the existing right-of-ways and to evaluate the effects of the multimodal improvements put into place before making a decision to widen any section of the roadway.

DRPT is also deeply engaged in the project. Department director Jennifer Mitchell informed the gathering that station improvements at Ballston and East Falls Church were being studied, as was the possibility of adding additional cars on these lines. “And we have not forgotten cyclists or pedestrians,” she declared. Part of any plan adopted will include consideration of improved access to Metrorail and bus stops for both types of travelers.

Renee Hamilton, Deputy Administrator of VDOT’s Northern Virginia District, took a few moments to update the attendees on the current status of I-66 improvement plans outside the Beltway. Hamilton announced that the second phase of public outreach had already begun, with “kitchen table” talks held with affected residents in the Dunn Loring area the previous weekend. “The team is still working to reduce the number of residents who could be displaced by the proposed plans,” she said. More public hearings are scheduled, starting on May 27 at the VDOT offices, May 28 at Oakton High School and on June 2 at a location to be announced in Haymarket.

Following Hamilton’s update, Sec. Layne, Commissioner Kilpatrick, DRPT Dir. Mitchell, and Nick Donohue, Virginia Deputy Secretary of Transportation came forward as the “Q&A” panel. Coordination with the Dulles Airport toll-less road was one question raised. Sec. Layne responded, “We are getting all the facts. Will do nothing to harm the benefits of our citizens going to the airport.”

Del. LeMunyon said he was “thrilled to see inside the beltway being considered,” but warned that the project came with considerable perils, noting that tolling on roads like the Greenway and Dulles Toll road came with the actual expansion of the roads, not before, “which I think is violating the Aubrey Lane rule of tolling,” he stated. He also expressed concerns that there would be no cap on tolls and that eventually they could continue to rise, or the roads be tolled no matter what time of day. “There could be a lot of public blow back,” he said. “Would the two ‘halves’ of I-66 be toll converted simultaneously?” was another question. “The goal is a seamless transition. Everything is being considered,” replied Donohue. “But in any case, drivers would have a choice when reaching the inside section I-66. Go North. Go South. Or go straight and pay the toll, versus North, South or break the law as it stands today.”

THE FAIRFAX COUNTY REPRESENTATIVES also weighed in on the proposals. Board of Supervisors Chairman Bulova asked if increasing the numbers required to use the HOV lanes might, in fact, decrease usage. Donohue replied that the conversion was coming in any case, since Federal laws require such a conversion by 2020 to roads that are degrading. Springfield Supervisor Herrity asked, “Have we done the numbers? Will we really get the increased capacity we need without widening the road?” Sec. Layne answered that because of the staggering costs of such an undertaking, and the challenges and disruptions that would be part of the process, it was necessary to implement the multimodal solutions first and determine what is working and what needs further adjustment before taking that possible next giant step.

All of the materials used at this presentation are available on the website www.transform66.org, with marked links for Inside and Outside the Beltway proposals. The website also contains comprehensive study results, project maps, resources and information on upcoming public hearings and ways to contact I-66 Project team members.