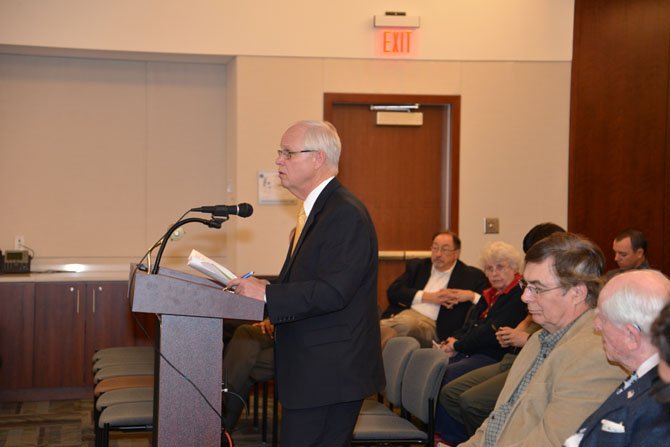 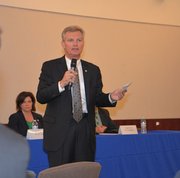 Douglas Stewart represents the Virginia Chapter of the Sierra Club at the Commonwealth Transportation Board’s public hearing. Proponent of more funds for multi-modal transit systems, Stewart cited a recent report by Smart Growth America stating that 18 percent of Virginia’s road were in poor condition, up from 8 percent only three years ago.

Members of the Commonwealth Transportation Board listen to the public’s comments Six-Year Plan 2015-2020.

“Congestion mitigation is the most heavily weighted factor by law when analyzing projects to be selected and funded in urban areas.”

It was Northern Virginia’s turn last week when Virginia Secretary of Transportation Aubrey Layne and the Commonwealth Transportation Board (CTB) held a public hearing at the offices of the Virginia Department of Transportation (VDOT) in Fairfax. The CTB is conducting meetings throughout the state to garner public opinion before their scheduled June vote on the state’s Six-Year Improvement Plan 2015 - 2020 (SYIP). Various entities have held numerous meetings in recent months, particularly since HB 2313 - the first comprehensive transportation funding bill in the state for more than 27 years – passed in the General Assembly last year. Those meetings were often standing-room-only affairs, could witness dozens of citizens lined up to comment on particular projects or to suggest others, and frequently got a bit heated.

The April 24 CTB hearing featured more representatives from local jurisdictions and organizations than individual citizens. More praise and invitations for cooperation may have been heard than in the past and there was less of the “stop sign on this corner, please! wishlist” atmosphere that marked many of the open transportation meetings of late. There were even several acknowledgements of VDOT’s Herculean efforts to keep Virginia roads clear and safe during the recent long, snow and ice-filled winter.

Not to say that those who spoke for the record weren’t there to support the projects of particular interest to their constituents, or that there weren’t some negative comments on parts of the Plan or on the process.

SECRETARY LAYNE introduced the attending members of the CTB as well as guest panelist Martin Nohe, Chairman of the Northern Virginia Transportation Authority, who noted that his inclusion shows the admirable level of cooperation being fostered between the state and the region. Layne summarized the agenda and the discussion on the table. Recently passed HB 2 received a large share of Layne’s remarks. The new law, which takes effect on July 1, mandates a prioritization process for transportation project selection. “Congestion mitigation is the most heavily weighted factor by law when analyzing projects to be selected and funded in urban areas,” Layne explained. Other factors include economic development, accessibility, safety and environmental quality. “HB 2 is designed to inject more objectivity, to help insure that the funds are used wisely,” he added. Exempt from the scoring process would be projects already under way, and those funded by revenue sharing.

Layne warned that there were challenges ahead. “We may not get this all right the first time. And there is the threat looming in August with about $1b in federal funds up for re-authorization.” He commented that most in the room had probably heard something about a budget scuffle going on in Richmond, referring to the state’s budget impasse, largely over the inclusion of a full rollout of Medicaid, which the Governor supports but Republicans oppose. “What we are working with here are mostly non-general funds, so they will not be significantly impacted by the budget discussions.”

Before opening the floor to testimony on the SYIP, several of the panelists provided facts and figures about current or upcoming projects for regional transportation improvements. Charles Kilpatrick, the state’s new Highways Commissioner noted $700m underway today, while newly appointed Director of the state’s Dept. of Rail and Public Transportation Jennifer Mitchell outlined spending allocations for VRE capital funds, the new Potomac Shores station, and other transit station improvements, including the allocation of 80 percent of the $365m for transit and rail work next year.

Some of the speakers to address the CTB panel included:

Virginia Delegate Jim LeMunyon, (R-67), whose comments included the need to fully fund and move forward with the I-66/Rte. 28 expansion and improvements, and to avoid any options that put more traffic on to Rte. 50.

Loudoun County Board Supervisor Suzanne Volpe (R-Algonkian District) expressed that the county felt “blindsided” by some of the proposals in the SYIP Draft that would significantly cut certain funds for road maintenance and improvement. Volpe also wanted the CTB to know that with the Draft only becoming available on April 18 - six days prior to the hearing - the timing of its release made any real review and analysis virtually impossible and that further review and commentary would be forthcoming.

David Snyder, Vice Mayor of Falls Church and the Vice-Chairman of the Northern Virginia Transportation Commission (NVTC) read a statement for the record, presenting an economic case for increased and sustained funding for transit in Northern Virginia. “This is a whole new generation today. They want transit that isn’t cars and highways,” he said. Snyder outlined “core capacity investments” that “will remove 35,000 cars from the road.” The NVTC was all in favor of a metrics system to evaluate projects, but stated that “the calculation of trips in the operating formula unfairly excludes trips made by tourists and many trips taken from airports, and uses a formula that only counts trips made by Virginians who live in Washington Metropolitan Area Transit Authority (WMATA) jurisdictions. Snyder said that the NVTC would continue to work cooperatively to see these issues addressed in the final version of the SYIP.

Arlington County Board Member Mary Hynes, like Snyder, urged the CTB to emphasize the multi-modal approach to project approval. “Walking, biking, and transit for Arlington are not optional,” said Hynes, “to ensure the economic health of all the region, as well as the quality of life of Arlingtonians. With the highest job density and the 2nd highest population, Arlington is unique, acting as something of a funnel for people on the move through and to and from Arlington.”

THE REPRESENTATIVE from the citizens’ organization “Arlingtonians for Sensible Transit” was there to protest the planned Columbia Pike Streetcar project, calling it a “staggering waste of money,” and making a strong argument for more buses to handle the area’s traffic needs.

The citizens of Vienna also worry that their quality of life and the “Main Street Village” they have worked for years to protect are being endangered by any plans that don’t place transit over more cars, especially as the Tyson’s Corner development continues. Vienna Vice-Mayor Carey Sienicki was there to represent the Town.

Bob Chase, President of the Northern Virginia Transportation Alliance had appreciation for all the hard work put in to date, but cautioned that the “Plan is an enigma to the average citizen,” citing difficulty in wading through the VDOT website, the 55 pages of Northern Virginia projects and all of the related information and articles. Chase also stressed that it was important not to lose a sense of urgency as a result of the passage of HB2. “We’ve already been waiting a real long time,” he reminded the panel.

As the meeting concluded, the audience was reminded that VDOT was still conducting additional hearings, and that public commentary was most welcome for consideration. If unable to attend one of the public hearings, contact information is available on the website at www.vdot.virginia.gov. Comments must be received by June 2 in order to be considered prior to the vote on the SYIP. Also on the website is a list of all the projects being considered for approval in the current SYIP. Click on Northern Virginia as the “District” for the projects database.