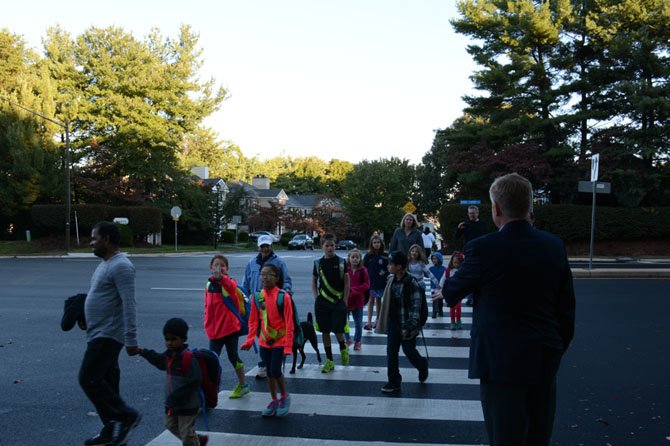 The “kiss and ride” lane of cars dropping off students was noticeably sparse at Cherry Run Elementary School.

Principal Mark Bibbee said they average between 70 and 80 cars a day. On National Walk to School Day, Oct. 8, he counted just 25. His students and parents were pounding the pavement.

“I think it’s great,” said Bibbee. “There’s two sides of it: The school board goal is to be a custodian of the environment and earth, so it’s nice we’re raising awareness about emissions. For me it’s also about healthy choices and healthy lifestyles.”

Bibbee said 100 of Cherry Run’s students are technically bus riders and 370 are supposed to be walkers. Even before the national awareness day came along, the school has been encouraging more students to walk or ride a bike.

“My kids normally take the bus,” said Burke resident and Cherry Run parent Michele Greeny. “Today we walked and it took about 30 minutes. If we lived closer, we’d walk every day, but we have to cross Old Keene Mill.”

THERE’S ALSO THE FACTOR of recent changes to the responsibilities of crossing guards at schools. “We were sort of forced into it,” said Bibbee. “Our kiss and ride line has been backing up.”

But regardless of the crossing guard situation, Cherry Run students, like many others, have speeding cars throughout the neighborhood with which to contend.

“This morning on Koziara [Drive], there was an accident right by the crosswalk,” Bibbee said in an interview on Oct. 9. “Someone was rear-ended, knocked the car over. They slammed on their brakes to avoid a kid in the crosswalk.”

In a study conducted over the summer by Fairfax County Police on neighborhood roads around the county, they observed more than 50 percent of drivers went more than 10 miles over the posted speed limit.

“You can see the demand,” said Braddock Supervisor John Cook, greeting a steady stream of Terra Centre Elementary school students and parents at the corner of Marshall Pond and Burke Centre Parkway, also on the morning of Oct. 8. “How many people might walk more regularly if it were safer.”

Cook was there with two Fairfax County Police officers, positioned in the intersection and directing multiple lanes of traffic.

“We did it last year and it was fun,” said Burke resident James Cubeta, walking to Terra Centre with his daughters Paige and Madeline. “We sometimes drive, but usually take the bus. This morning Paige was ready to bound out of bed and walk to school.”

“It’s about getting people to try it,” said Cook, “bringing it to the forefront and focus on how we can make it happen more.”

THAT’S THE NUTSHELL of Cook’s “Slow Down. You Live Here. We Live Here.” neighborhood speeding awareness campaign, for which he held a community kickoff meeting Wednesday night after Walk to School Day.

“Everyone has to get that awareness,” said Cook, “from the Homeowners associations, the civic associations, everyone has to work on being more careful when driving.” Cook is also planning a crossing project for Terra Centre that will include narrowing Burke Centre Parkway slightly as it passes the school to allow for wider sidewalks, as well as adding islands in the street itself.

Bibbee has been having dialog with the homeowners association and VDOT about speeding on Koziara each of his five years at Cherry Run.

“It’s a big concern,” he said. “We’ve talked about four-way stop signs, tried to get speed humps. It’s been a lengthy process.”

In the mean time, students are taking it one day, and step, at a time.