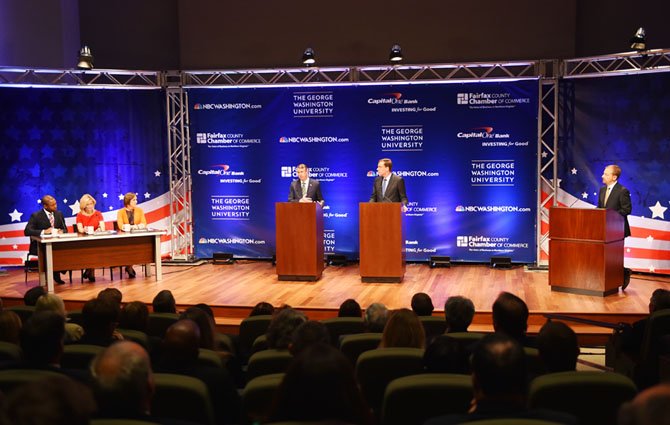 The Fairfax County Chamber of Commerce hosted a U.S. Senate debate between U.S. Sen. Mark Warner (D-Virginia) and Republican challenger Ed Gillespie, on Tuesday, Oct. 7 at The Capitol One headquarters in McLean. The forum was moderated by Chuck Todd, host of NBC’s “Meet the Press.” Panelists included Aaron Gilchrist and Julie Carey of NBC4 and Karen Tumulty of The Washington Post. Photo courtesy of The Fairfax Chamber

In front of an audience of Northern Virginia business leaders, U.S. Sen. Mark R. Warner (D-Va.) and Republican challenger Ed Gillespie honed their attacks on each other during a sharp, wide-ranging debate Tuesday evening, Oct. 7.

While the candidates mostly avoided headline-making confrontations, they drew stark distinctions between their visions of the nation’s future, staking out familiar ground on politically-polarizing issues such as same-sex marriage, immigration, abortion and the health care crisis.

The debate, sponsored jointly by NBC4 and the Fairfax County Chamber of Commerce, was held in the two-story auditorium of Capitol One’s headquarters in McLean.

Both candidates quickly established their pro-business positions, vowing to clear the way for greater economic opportunities for Virginians.

“I want future generations to have the same opportunities that I've had. My grandfather was an immigrant janitor. My parents never went to college. And I got to be counselor to the President of the United States of America,” Gillespie said in his one-minute opening remarks, taking a familiar swipe at Warner by adding that he “feared we're losing that kind of economic opportunity and upward mobility as a result of the Obama/Warner policies.”

“My policies will ease the squeeze on hardworking Virginians and make it easier for them [and] for the unemployed to find work …. Under the Obama/Warner policy, for every net job created in Virginia two people have gone onto food stamps. There are 65,000 more women living in poverty today. And 250,000 of us will have our health care plans cancelled as a result of the Affordable Care Act, Obamacare, which the senator still supports,” Gillespie said.

IN HIS OPENING STATEMENT, Warner positioned himself as the moderate, bi-partisan problem solver who will help break the paralyzing gridlock in Washington. The former governor is seeking another term in Washington, where he said he had a record of working with other lawmakers to push forward pragmatic, “sensible” solutions to challenges like health care costs, crushing student debt, the nation’s immigration crisis, and its slow economic recovery from the 2008 recession.

“You know what, on every major piece of legislation I work on I start with a Republican partner … I'm so proud that I've got actually more former Republican legislators supporting me this campaign than when I first ran.”

Chuck Todd of NBC’s “Meet the Press,” the debate’s moderator, addressed the first question to Gillespie, noting the day’s breaking news of the U.S. Supreme Court's decision not to review the case on gay marriage.

“It is now legal here in the commonwealth of Virginia. You personally oppose gay marriage. Are you comfortable? Can you accept this decision by the Supreme Court not to act?”

Gillespie said it was a matter for the state, not the federal government.

“I love people and respect them for who they are. I believe we are all created in the image and likeness of God. And as you noted, in my faith, marriage is between one man and one woman …,” Gillespie said.

He added that same-sex marriage “is the law in Virginia today. And — as I do not believe that — a federal law … is the proper approach, then of course I accept the ruling of … the decision by the Supreme Court not to take up this decision of the circuit court.”

“I support marriage equality,” Warner said, when it was his turn to address the question. “I think it is appropriate that we live in a commonwealth that doesn't discriminate.”

Debate panelists included Aaron Gilchrist and Julie Carey of NBC4 and Karen Tumulty of The Washington Post, who each asked the candidates two questions.

Carey asked Warner if he thought U.S. Sen. Tim Kaine was wrong when he sought to constrain the president’s unilateral power to make war.

“Your own colleague, Sen. Tim Kaine, has said, quote ‘You don't ask people to sacrifice their lives until the nation has debated and committed to the mission.’ Is he wrong about that?”

Warner said he agreed with Kaine, and also said it was an example of his difference with the president.

“This is where I differ where the president,” Warner said. “I believe that we need a more forceful response against Syria and Iraq. I think it is very important that we also … I've been calling since early March for stronger actions against Mr. Putin in Russia.”

Warner and Gillespie repeatedly went back and forth on the “97 percent question.” A prominent theme in Gillespie’s campaign has been hammering home the statistic that Warner voted with President Obama 97 percent of the time.

“My opponent's whole campaign has been pretty much based on this bogus charge, the 97 percent charge,” Warner said after Gilchrist asked both candidates to list how they differed from the President. “I mean, independent political analysts have called it both misleading and not reflective of my record. The National Journal which still does a review of all the votes, not just a subsection, ranks me right in the sensible center.”

Warner replied that those votes were “mostly procedural votes … What he didn't say as well is when I voted against off-shore drilling is because there was no proceeds coming back to Virginia.”

Tumulty, a former Time Magazine writer, kicked off a spirited debate on immigration reform and the DREAM act (Development, Relief, and Education for Alien Minors Act.)

Supporters argue the latest version of the bipartisan legislation would produce a variety of social and economic benefits, while critics contend that it would reward illegal immigration and encourage more of it, inviting fraud and shielding gang members from deportation.

She asked the question to Gillespie first.

“A moment ago you spoke quite passionately about your own family's story as an example of the kind of opportunity this country has offered immigrants,” Tumulty said. “ Back in April, Mark Herring, the attorney general of Virginia declared that undocumented, qualified immigrants who grew up in Virginia, who graduated from high school in the commonwealth could qualify for in-state tuition at universities and colleges in Virginia. Do you agree with this policy?”

“I understand it,” Gillespie said. “It's a state policy. I'm running for the U.S. Senate.”

Gillespie went on to say that the U.S. “should have a means by which we can issue fresh visas to people who are here if they have, you know, not violated any other laws beside our immigration law.”

But he also said any legislative approach begins with securing our borders.

“The fact that we have a porous southern border today is not just an immigration concern, it is a national security concern with the growing threat if ISIS or ISIL. And it is a public health threat and a public safety threat with the growing concerns about Ebola .…”

Warner said he agreed the immigration system is broken.

“The thing is, the Senate actually put together a bipartisan plan that would do that … It more than doubles border security,” Warner said.

Warner said the bipartisan bill dealt with the question about special work visas, and other immigration reform issues.

“How do we make sure we have those tech workers that graduate from George Mason or Virginia Tech, they don't have to go home, and they simply have to go to Canada for those high-paying jobs now because (Canada) fixed their immigration system .…”

IN THE MOST CONTENTIOUS MOMENT of the debate, Warner castigated Gillespie for withdrawing his support of the bill.

“Remarkable thing, this bill was supported by 68 senators … Was it perfect? Maybe not. But we got nothing back from the House. And what I find curious is back when this bill was being debated my opponent, Ed, wrote and said that this bill was both good policy and good politics. Now he said on the campaign trail that he's against the comprehensive Senate immigration reform bill. And I just wonder what's changed? Did the policy change or the politics changed?”

“Nothing changed on my end,” Gillespie shot back. “And it's, you know, PolitiFact, which you cited earlier, looked at my position on immigration reform and said it's been entirely consistent. And it has been.”

In the past month, several polls have come out showing that support for Gillespie is growing, although Warner still has a commanding lead. A survey from the Wason Center for Public Policy at Christopher Newport University, which came out the same day as the debate, showed likely voters favoring Warner by 12 points on the day of the debate. Gillespie noted his growing support in a brief post-debate Q&A with reporters.

“I feel real momentum ... the race is narrowing,” Gillespie said.