Hiding at the Top of the Ticket
Votes

Hiding at the Top of the Ticket 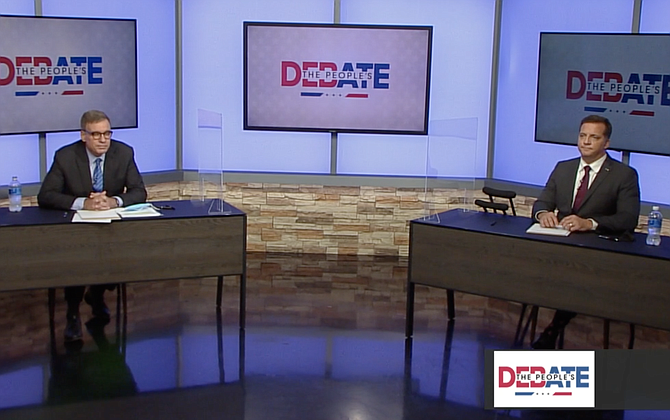 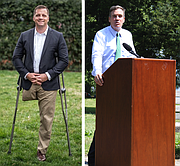 When Mark Warner ran for governor in 2001, opponents knocked him for wanting to be governor without having ever run for office before. Now, almost 20 years later, Warner is seeking a third term in the Senate. His Republican opponent in the race, Daniel Gade, has never held elected office before. And Gade’s closing argument to voters as the campaign draws to a close is that they should reject Warner because he’s a “career politician” who is little more than a partisan hack masquerading as a moderate.

"When he says he’s going to work across the aisle, what we really see is him retreating into his partisan positions,” said Gade in the third and final televised debate earlier this week. “He gets bipartisan only in an election year.”

Warner rejects this line of argument. When questioned about his willingness to work across the aisle, Warner mentions prominent Republicans he’s worked with in the Senate, including John McCain and Orrin Hatch. He also points to support from his predecessor in office, Republican Senator John Warner. During his first campaign for the Senate he positioned himself as a “radical centrist,” an approach he continues to take 12 years later.

“Virginians know my record,” says Warner. "They know my record as governor, when as a Democrat with a two-to-one Republican legislature, we made record investments and remained the best-managed state, best state for business and best state to receive a public education.”

The race for Senate in Virginia is not on the national radar as a race to watch, and Republicans have not identified Warner as an incumbent who might be vulnerable. Polls show Warner consistently with a double-digit lead over Gade. The most recent poll is from Christopher Newport University, which shows Warner with a 17 point lead. Despite the outsized lead, the airwaves have been buzzing with ads in the race — including spots on broadcast television where Warner attacks Gade.

“That suggests to me that there’s something there. Why go negative unless you have to?” asked Quentin Kidd, director of the Wason Center for Public Policy at Christopher Newport University. “I have not thought of this race in any sense as being competitive, but I don’t know why Warner would run a negative ad.”

Six years ago, when Warner was campaigning for a second term in the Senate, he was running another race that few people identified as a race to watch. But in the final days of the campaign, Republican Ed Gillespie surged and came close to beating Warner in an upset. Warner ultimately prevailed, but the unexpectedly close margin in that race gave Republicans hope they might be able to unseat him this year if they were able to find the right candidate.

“This is beyond an uphill race for any Republican running, especially candidates who have never held elective office and have no name recognition,” said David Ramadan, a former Republican member of the House of Delegates who is now at the Schar School of Policy and Government at George Mason University. “Mark Warner wins this one with a landslide.”

"When he says he’s going to work across the aisle, what we really see is him retreating into his partisan positions.”

THE CANDIDATES have presented a contrast that’s personal and political. Gade, 45, is a combat-wounded vet who now teaches at American University and lives in Mount Vernon. Warner, 65, is a resident of Old Town who made a fortune as a founder of Nextel before becoming state party chairman and launching a campaign for governor. On the campaign trail, they’ve disagreed on everything from the Affordable Care act to the Trump administration’s response to coronavirus and the vacancy on the United States Supreme Court. They’ve also admitted a few mistakes along the way. During a debate at Norfolk State University, Gade acknowledged that he probably shouldn’t have said wearing a mask during the pandemic was what government overreach and tyranny feels like.

“In May of 2020, what you saw there was me at a sort of philosophical point that a government that is powerful enough to make you do little things is also powerful enough to take your liberty in other ways,” said Gade. "Maybe I mangled the point. I’m not a career politician.”

The moderators of that debate also got Warner to admit to making a mistake in being slow to criticize the name of the Washington football team, which continued to use a racial slur as the team’s nickname until the Black Lives Matter movement forced a national conversation about white privilege. During the debate, which was held on the campus of one of Virginia’s HBCUs, Warner said he took the wrong position by being one of the few Democrats who failed to demand the team ditch its racist former name.

"I probably should have weighed in earlier,” said Warner during the televised debate. "But you learn and you grow, and I think you look at people’s history and record.”

The role of government has been a central defining theme of the campaign, perhaps best illustrated by a debate over something that happened in 2016. That’s when a woman was killed by a beach umbrella in Virginia Beach. Warner reacted by urging the Consumer Product Safety Commission to step in and potentially help save lives. Gade said that was the wrong response.

“That’s maybe a local government responsibility or state government maybe,” said Gade shortly after securing the Republican nomination over the summer. "But the idea that this overarching, over powerful federal government would reach into our lives in a way that would tell us how deeply we should drill our beach umbrellas into the sand; that's’ absurd.”

“Generally speaking, businesses like to have state rules preempted so they can have a single standard,” said Warner when asked about Gade’s comments. "If Mr. Gade is suggesting that we ought to have 50 different sets of rules or maybe 50,000 different sets of rules because every locality ought to be able to make those rules, that would be an area I just respectfully disagree.”

Perhaps the biggest point of distinction between the candidates has been over the Affordable Care Act. A Republican-led lawsuit challenging the law is on the calendar for the Supreme Court this fall, and candidates for office are using the issue as an appeal to voters on both sides. During the first televised debate hosted by the Northern Virginia Chamber of Commerce, Warner says Gade's opposition to the ACA would undermine protections for preexisting conditions. Daniel Gade responded that was offensive.

Warner says Gade can’t have it both ways.

“If my opponent wants to change his position and say he supported my decision along with John McCain to keep the ACA, he can make that change,” said Warner. "But you can’t go out and criticize me for the ACA and then cherry pick which parts of the ACA you want to preserve.”