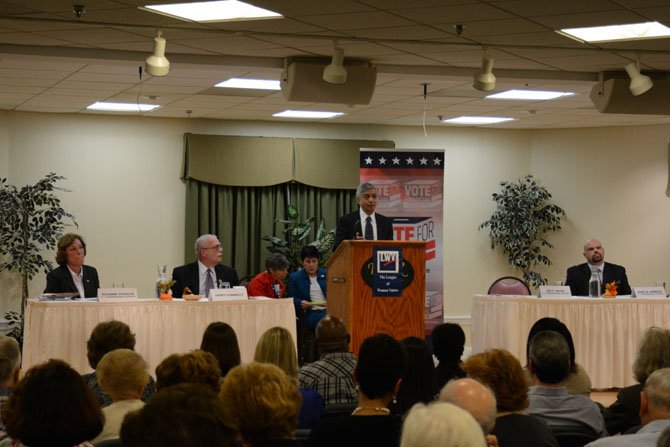 It wasn’t so much a down and dirty debate as a no-frills four-way question-and-answer session. Not that AARP and the League of Women Voters of the Fairfax Area (LWVFA), two of the sponsors of the “Meet the Candidates” series billed the Oct. 14 event as such. Tuesday’s meeting was the penultimate of seven events in the series.

The roughly 100 voters in attendance at the Westminster continuing care retirement community dining room had the opportunity to witness the rare occurrence of all four District 11 congressional candidates present under the same roof, answering the same questions.

Those who missed the proceedings can see video of the nearly two hours (with a recess in the middle to switch the camera tape) on the League of Women Voters’ YouTube page.

Suzanne Scholte (Republican), Gerry Connolly (Democrat, incumbent), Joe Galdo (Green) and Marc Harrold (Libertarian) approached the dais microphone in ballot order, starting with Scholte. Each candidate was given three minutes for an opening statement, then two minutes per question to deliver a response.

Olga Hernandez, organization director for LWVFA, posed a battery of questions to the panel of candidates, including suggestions from the audience.

Candidates weren’t generally afforded the opportunity to respond directly or rebut another candidate’s claim, though Scholte and Connolly wasted no time in taking their first opportunities to indirectly butt heads over the Affordable Care Act, known as “Obamacare.”

“We've never had something like this,” said Scholte in her response to the question “What is one thing you would change about the Affordable Care Act,” “where the parties didn't work together for a solution. That's why it's been such a disaster.”

“I couldn't disagree with my opponent more,” Connolly said in turn. “I'm proud of having voted for the Affordable Care Act. It is transforming lives in America as we speak. 7.3 million people who were uninsured are now insured. And another 3 million people are accessing Medicaid. And there would be 400,000 more of them here in Virginia if my opponent's party would only stop blocking that expansion down in Richmond.”

Scholte also called out Connolly for siding with his party and voting for the Sequester. In his subsequent response, the incumbent responded directly that “I opposed it. Last year I was the only one of northern Virginia congressmen to vote against the continuing resolution to fund the government, because I said it baked in sequestration.”

Galdo and Harrold each came to the plate with more direct responses to the Affordable Care question than each other, favoring reforming and repealing Obamacare, respectively.

“I would change it to a single-payer plan,” said Galdo, “put it under Medicare. Rather than going through insurance companies, increasing the cost and complexities of the system, that would simplify it and lower costs.”

“I believe it is a step towards a single-payer system,” Harrold said. “I don't think there's a real way to favor Obamacare without realizing that it’s a slippery slope. It's a huge encroachment on a major portion of the economy.”

For the bulk of the questions, that ranged in subject from ideas to stabilizing Congress and strengthening Social Security to stances on new voter identification laws and federal funding for Planned Parenthood, the four candidates responded in large part as advertised. Scholte and Connolly touted their individual successes while picking apart the other’s party’s deficiencies.

Galdo was understated and pragmatic, drawing agreement from other candidates with his simplified two-step assessment for Social Security. “One is lift the ceiling on Social Security taxes,” he said. “That would create additional revenue for the Social Security trust fund. The second is create more jobs. The more people you have working, the more are paying Social Security. That's our problem now.”

Harrold was straightforward yet affable, and consistent in applying the filter of: Is this something federal government should be involved in, if any government?

“I thought about running as the pro-traffic candidate,” he dead-panned to a question about transportation expansion. “It didn’t poll well.”

There was little dissension among the panel in support of transportation infrastructure expansion, like extending the Metro Yellow Line, favoring immigration reform, decrying the partisan unproductiveness of the current Congress and perceiving the new voter identification laws in Virginia as discriminatory and threatening to fundamental civic rights.

Whereas Planned Parenthood was one of the more divisive questions: Scholte did not support federal funding, citing the abortions facilitated by Planned Parenthood as her central disagreement. Connolly referenced his voting record against the proposals to defund the organization in Congress and drew rare applause from the otherwise calm crowd with his favoring a woman’s right to choose.

Galdo supported funding on the grounds of the “valuable health care services” provided by Planned Parenthood, despite his personal disagreements with abortion in the majority of cases.

Harrold joined Scholte in not favoring funding, if only from the small government stance. “In the public discourse,” he said, “the question is whether public funding should be used. It is intimate and because it’s intimate, it should be left without any government interference.”

At the end of the formal program, voters had the opportunity to meet the candidates face-to-face and ask additional questions.