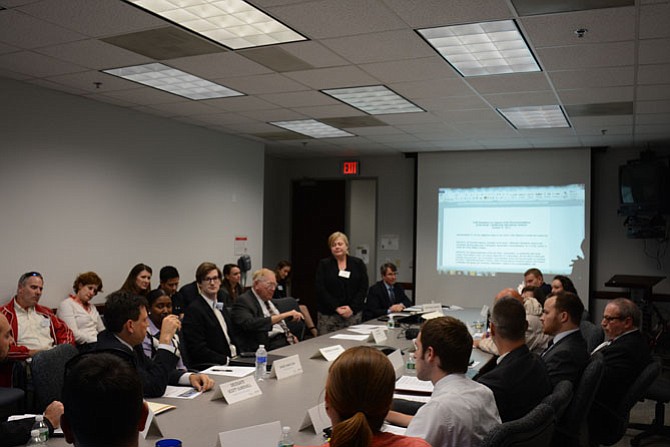 The Executive Steering Committee voted unanimously to advance the Route 1 multimodal alternatives plan to the Board of Supervisors in Fairfax and Prince William Counties. Photo by Tim Peterson.

The redevelopment of Route 1 is not unlike sitting in rush hour traffic on Route 1: slow, but moving gradually forward.

On Oct. 27, the executive steering committee for the Route 1 Multimodal Alternatives Analysis voted unanimously to send a comprehensive redevelopment plan to Fairfax and Prince William County supervisors for endorsement.

The Virginia Department of Rail and Public Transportation (DRPT) held its final public meeting Oct. 9 at the South County Government Center to present its proposal for developing alternative modes of transportation for the traffic-choked corridor.

Their first recommendation is Bus Rapid Transit (BRT), oriented in center lanes of Route 1 out to the Occoquan River, with a projected timeline in three phases to be operational by 2026, 2028 and 2032. Part two would be extending the Metro Yellow Line 3.1 miles to Hybla Valley, operational by 2040.

Del. Scott Surovell came to the steering committee armed with survey results from 88 of his constituents, saying the timelines are too elongated.

Fairfax County Department of Transportation director Tom Biesiadny said that to plan for both phases simultaneously would delay any development much longer than at least getting started with the BRT.

“The rail planning exercise is different from BRT planning,” said Lee District Supervisor Jeff McKay. “You don’t put a street through a neighborhood quickly on a comprehensive plan. That absolutely has to be a separate step.”

But regardless of the proposal, it’s the Boards of Supervisors who will decide how they want to proceed with the comprehensive plan.

The supervisors’ next steps would be securing funding sources. Surovell weighed in, saying, “I don’t think we should constrain ourselves in terms of our funding models, that the FTA is the only game in town.”

He proposed working with the Army and federal elected officials as alternatives, since Fort Belvoir’s presence makes Route 1 redevelopment stand out among other municipal projects. “There are 8,000 acres down here we can’t tax,” Surovell said.

Though the supervisors now have numerous questions to address, the steering committee was enthusiastic the study and proposal have made it that far.

“I’m optimistic this process will be the first step to a lot of new steps to bringing our community to a consensus,” said Surovell.

“The major challenge we now is to have the entire community on both sides of Route 1 come together in a process that allows them to decide what it’s going to be like,” said Hyland. “There are two magisterial districts, two supervisors, delegates and senators. It’s going to be a major challenge.”