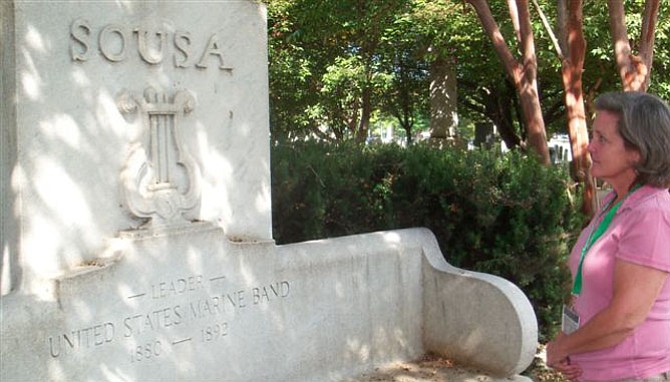 are unlikely lures for the ordinary weekend. But do not try telling that to Lucy Burke Goddin, president of Ivy Hill Cemetery Historical Preservation Society in Alexandria. 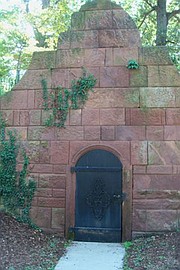 “The Vault” at Ivy Hill Cemetery.

Recently, Goddin attended Operation Conservation, a conference co-sponsored by the Association for the Preservation of Historic Congressional Cemetery and the Association for Gravestone Studies. The forbidding titles presented above are only two of the several technical presentations. “Conference attendees form partnerships,” according to Goddin, through which problems and solutions can be shared with people working at other historic locations.

Asked what value she sees in such an event, Goddin first points to the mission of her society. Cemeteries, she said, “are not just places for dead people.” They need to be kept “alive” because of what can be learned from the lives of the deceased and from the beauty of the grounds, both man-made and natural, including flora and fauna. Cemeteries are known as places of quiet and contemplation; a resting place for the living. The society aims to protect and preserve Ivy Hill so that it becomes, in effect, “a tourist destination.”

All these objectives are rooted in the decades after the mid-1800s. That is when cemeteries were born. People died before that, of course, with their remains placed in a churchyard or a plot on the farm. With urbanization and population growth and related public health concerns, that arrangement did not work well anymore. Cemeteries (“place for the sleeping”) were laid out in the countryside. Respect for the deceased became reflected in ornamental grave markers and artful landscaping. Public parks, museums and art galleries were non-existent. Cemeteries attracted people. They would trek into the countryside for a day of picnics and hiking, and sometimes even hunting and racing. In Goddin’s terms, those early cemeteries were “alive.” Attitudes changed over time, graveyards lost their attraction and cemeteries became forgotten places. Goddin, and the other attendees of Operation Conservation, seek to reverse history and to resurrect historic cemeteries as “destinations.”

The premier example of success at Ivy Hill is “The Vault.” Originally intended to be a temporary place for remains, the restored structure can be augmented with temporary lighting and furniture for varied gatherings. The Victorian Society has convened there, as has a group conducting readings from the works of Edgar Allen Poe [see story above]. Goddin reports that the booking schedule has many openings that will suit interested persons.