Reenactors give visitors first-person biographies of the dead at Ivy Hill Cemetery. 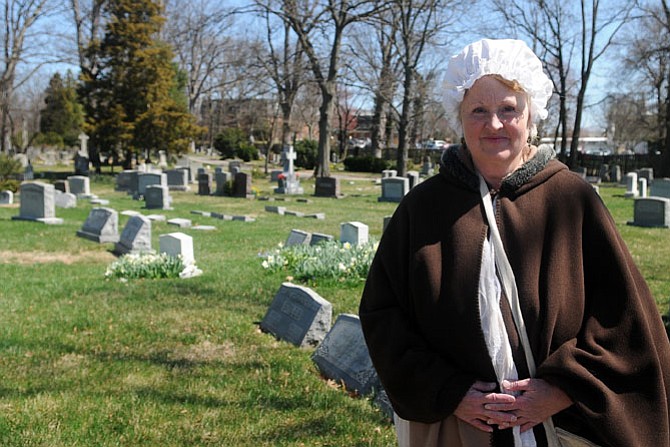 Stacy Hawkins as the Mistress of the Cemetery greets visitors to Ivy Hill on Saturday afternoon. LOUISE KRAFFT 2015

Like any good host, many of Ivy Hill Cemetery’s permanent residents greeted visitors at the front gate. Despite many being deceased for well over a century, on April 4, the tenants were brought to life by costumed reenactors who guided visitors on tours of the cemetery.

Burials on the cemetery grounds began in 1811. Lucy Burke Goddin, president of the Ivy Hill Historical Preservation Society, said the tours are part of a campaign to get people to come to the cemetery for reasons other than dying.

Stacy Hawkins, while dressed in a historic bonnet and gown, wasn’t playing a particular character. Instead, Hawkins said she filled the vital role of a 19th century town gossip. Despite the intrepid reporting of the Alexandria Gazette, Hawkins said word of mouth was still how news of events most often travelled around Alexandria. 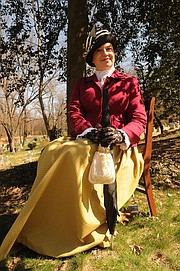 Hawkins directed visitors towards George Mason, a Virginia statesman and considered one of the fathers of the Bill of Rights, played by Richard Robinson III. Mason stood watch over the grave of his great-grandson Beverly Randolph Mason, a Confederate soldier as a young man and later founder of the Gunston School for young women in Washington D.C.

Robinson said he wasn’t very familiar with Mason before he joined the event, but said that as he read more on the subject he realized that Mason doesn’t get the credit he should as a founding father or as an early proponent for education in the United States.

“Education is not as valued or cherished now as it once was,” said Robinson. 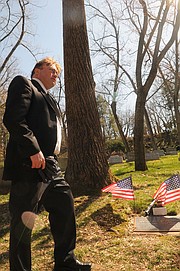 Further down the hill, Sarah Ceteras stood in character as as Constance Cary Harrison, an American writer who died in 1920, above the woman’s grave. Between 1876 and 1911, under the pen name Refugitta, Harrison wrote serialized historical fiction and romance novels for young women.

“She was from high society,” said Ceteras on what interested her about the character, “But she was adventurous, brave, and bold.”

In addition to her fame as a writer, Harrison and two of her cousins are credited with sewing the first confederate battle flag.

At the bottom of the slope that covers most of the cemetery grounds, the last actor on the tour wore a much more modern suit than the other reenactors scattered across the hillside. Terry Gish portrayed Wernher von Braun, one of the cemetery's more recent famous residents. Braun was a German scientist who was the chief architect of the Saturn V rocket which sent American astronauts to the moon on the Apollo missions. One of Braun’s relatives had recently left a model of one of the rockets at the gravesite. 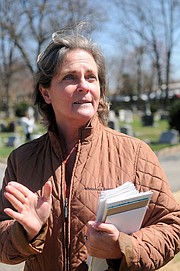 As a former Nazi, a member of the Schutzstaffel (SS), and the chief architect of the V-2 missile, Braun is also one of the cemetery’s more controversial figures. Gish said it’s important to understand the historical context for a German scientist in the 1930s. By the 1940s, Braun became an outspoken critic of the part and was eventually arrested as a communist sympathizer accused of deliberately sabotaging the development of V-2 project.

Braun was brought to the United States as part of Operation Paperclip, a program orchestrated by the Office of Strategic Services (OSS) to bring more than 1,500 German scientists and engineers to the United States. In the United States, Braun worked on the development of intercontinental ballistic missiles during the Korean War, but would develop his greatest achievements during his time at NASA.

“NASA was the best thing to happen to Braun,” said Gish. “His technological developments were finally about space flight, not weapons.”

Braun’s family still lives in Alexandria. Last year, Gish said he was honored to meet a relative who visited the grave last year.

Despite Braun’s being, arguably, the cemetery’s most famous resident, Goddin said she tries not to focus the tours and visits on him. Goddin said it isn’t simply because of Braun’s controversial history, but mostly out of respect to his family still living in the area. While pushing for the cemetery to be more accessible to the public, for Goddin, it’s another example of the difficult balance between building visitorship and maintaining the privacy and respect for families of Ivy Hill’s residents. Goddin says people ask her all the time if she thinks holding events like this at the cemetery is disrespectful to those buried there.

“As long as the events are done in a respectful manner, I don’t think there’s any problem with it,” said Goddin. “It would be more disrespectful not to bring people here.”

According to Goddin, the cemetery’s owners realized nine years ago that as the space started to fill up, the cemetery would begin receiving less income and would be less able to maintain the grounds. The Historic Preservation Society was started to help build community interest in the site to keep the cemetery from fading into obscurity once its lots are filled.

Goddin has worked with the Historic Preservation Society for the past eight years and says her family has a deep connection to the cemetery. Goddin says both sides of her family are spread throughout the cemetery grounds, several of whom were discussed at different sections of the tour. Goddin says growing up around the cemetery gave her family a quirky sense of humor. Goddin remembered her mother lying down in the grass and “trying out a spot” on the cemetery grounds. In November of 2014, after she died, Goddin and her family buried her mother there. Her parents would bring her to the cemetery when she was a child and she remembered being terrified, particularly of a (recently renovated) vault her father told her contained a troll. Since beginning her work with the Historic Preservation Society, though, she says the cemetery has started to feel more like a home.

Those who went on the tour said they found it educational and said that hearing the histories from the mouths of those who lived it was a nice touch.

“Everywhere you look in Alexandria, there’s history,” said John Henrehan. “Until this tour, I really didn’t know anything about the cemetery. I was surprised it had so much more recent history. I enjoyed the tour … and it’s always nice to be on the right side of the grass.”