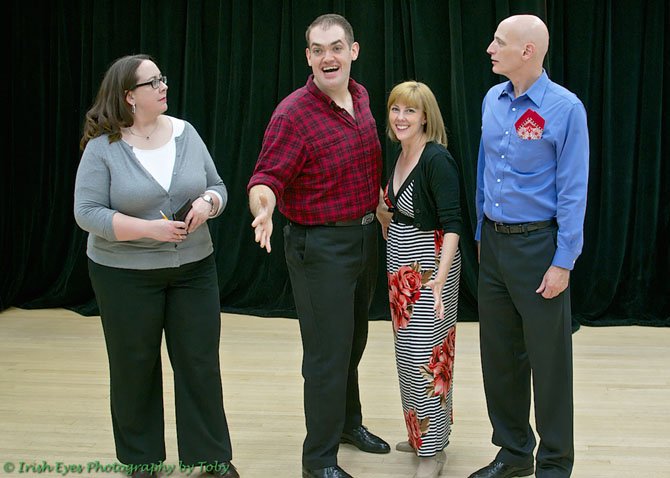 McLean Community Players present "The Game’s Afoot, or Holmes for the Holidays" at McLean Community Center, Alden Theatre, 1234 Ingleside Ave, McLean. Performances Sept. 26-Oct. 12. Fridays and Saturdays at 8 p.m., Sunday matinees on Sept. 28 & Oct. 12 at 2 p.m. Tickets are $18-$20. Group rates available. For tickets and information call 703-790-9223 or visit www.McLeanPlayers.... Note: Through a cooperative agreement between the Metropolitan Washington Ear and The McLean Community Players, along with the support of The Alden Theatre at The McLean Community Center, audio description services for those with vision challenges will be provided on Saturday, Oct. 11.

Be the first in Northern Virginia to see the prolific D.C. area playwright and Helen Hayes Award recipient Ken Ludwig's farcical whodunit, "The Game's Afoot, or Holmes for the Holidays." It is receiving its area premiere from the McLean Community Players.

Helmed by veteran director Bob Sams, "The Games Afoot" is the recipient of the 2012 Mystery Writers of America Edgar Allen Poe Awards – Best Play. Sams described the play as "simply fascinating." He knew he wanted to direct the show and bring it to "first life" at the Alden.

The mystery-comedy takes place in the mid-1930s as the cast of a long-running Broadway production of "Sherlock Holmes" are at the Connecticut castle home of the show’s author and star, a fictionalized William Gillette. The show revolves around solving murders, both attempted and successful, even as the Broadway Holmes and his actor colleagues become suspects. 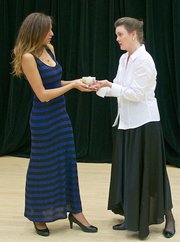 "The Game’s Afoot": From left -- Daria Chase (Dina Soltan) refuses the offer of a cup of tea from Martha Gillette (Kathryn Johnston).

As winter sets in, Police Inspector Goring works to unravel the crime. Bodies appear, disappear and reappear with many a misunderstanding among the guests. Of course, the castle has plenty of hidden rooms and gadgets.

Sams has a spirited cast of eight, with many newcomers to the Alden Stage. The police inspector is Elizabeth Replogle. "The other characters underestimate the Inspector. What they first see is dowdy, frumpily dressed woman. They don't understand her resolve to solve," said Replogle with a sly smile. "But, they will be so surprised!"

Featured as Gillette/Sherlock Holms is Frank Gorrell. The two characters are quite different but Gorrell is up for the challenge. In developing his characters, Gorrell spoke of "his love for comedians that ran the gamut from the Marx Brothers to Monty Python." He spoke fondly of John Cleese in television's "Faulty Towers" as an actor who resonated, with his wit and ways of giving audiences a great laugh.

William Gillettte was an actual person who played Holmes on stage for many decades. His home was an actual castle, now a tourist attraction in Connecticut. Gillette is credited with coining the phrase, "Elementary, my dear fellow! Elementary."

"The Game's Afoot" is a fast-paced comedy-mystery with a surprise ending for audience enjoyment and fun, said Cathy Farnsworth, publicist, McLean Community Players.

"When an actor who has played Sherlock Holmes for 20 years is faced with a murder to solve – he’s Sherlock Holmes, what could possibly go wrong?” added Sams, "Come and see."