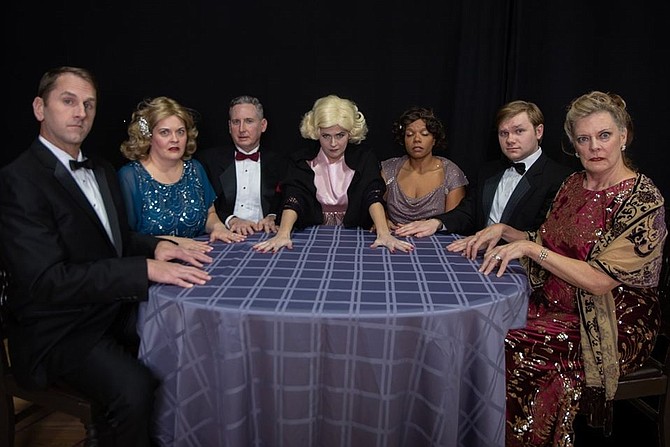 “This is an enjoyable puzzle for audiences to try and figure out. I wager they cannot find our killer easily. Even cooler, it has a real life celebrity, William Gillette, set amongst the fictional characters.”

Written by the DC area’s award winning playwright Ken Ludwig, “The Games Afoot” is full of peril and hilarity. It is set in December 1936, when Broadway star William Gillette, widely admired for his leading role as Sherlock Holmes, has invited fellow cast members to his isolated Connecticut castle for the weekend. But then one of the guests is murdered. The festivities immediately cease as things turn dangerous. It’s up to Gillette to track down the killer before the next victim appears. He assumes the persona of his beloved Holmes to do so.

“In recent years, Sherlock Holmes has been redeveloped again” in contemporary television series and in the movies, noted Mykeityn. “We as a society like knowing there is a mastermind detective around to solve all the mastermind bad guys out there.”

Tim Silk portrays both William Gillette and Sherlock Holmes. “’The Games Afoot’ is a hoot! It’s a crazy, fast-paced murder mystery with a lot of physicality. You also get a good amount of Shakespeare in this play because the characters are all actors who like to show off their acting skills.”

Charlene Sloan plays Madge Giesel, the witty, sharp woman who loves being in the theater. She is a character who is “bold; it is just fun to play in ‘The Games Afoot’ world a few hours each week.” Katie Kramer portrays theater critic Daria Chase. “Daria has been one of my favorite characters to play. She has all of the best characteristics for an actor; humor, sex appeal and she's the villain.”

The actors agreed, “The Games Afoot” is a fast-paced hysterical mystery with twists and turns.

One special request from director Liz Mykietyn: “I hope audiences do not tell our secrets as not to ruin the plot for those who have not attended yet.” Be warned.

Reston Community Players present “The Games Afoot” at Reston Community Center’s CenterStage, 2310 Colts Neck Road, Reston. Performances Jan. 17 to Feb 1, 2020. Performances Jan. 17-18, 24-26, and Jan. 31-Feb. 1 at 8 p.m. except for Jan. 26 which is a matinee with 2 p.m. curtain. Tickets: $28, $24 (seniors and students). For tickets, contact the box office at (703) 476-4500 or online at www.restonplayers.org. Note: This production is rated PG-13 for some staged violence. This production also contains the use of theatrical haze, fog, gunshots and strobe effects. CenterStage is accessible and offers listening devices for the hearing impaired. There is mild violence in the production.