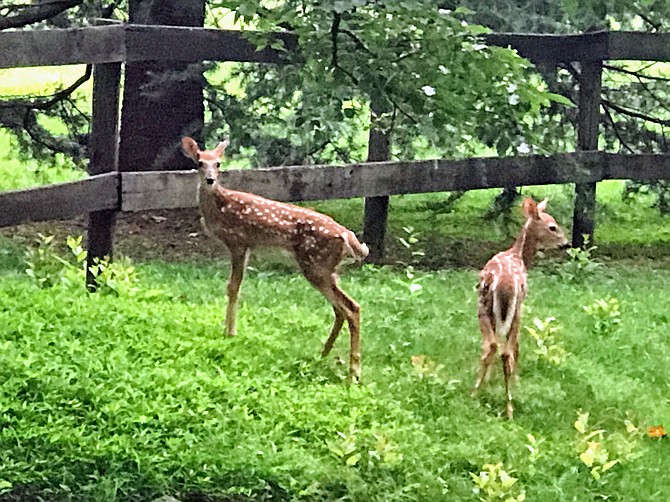 Deer by the roadside: Saturday, Sept. 8, marks the start of the Fairfax County 2018-2019 Deer Management Program. Photo by Mary Kimm. 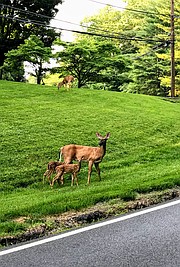 Deer by the roadside: Saturday, Sept. 8, marks the start of the Fairfax County 2018-2019 Deer Management Program.

There are probably very few county residents who can claim to have never seen a deer in their travels around our region. Sadly, quite a few can claim having experienced an up-close-and-personal whitetail encounter on the roadways.

In a 2016 study, Virginia was ranked 13th in the nation for the number of deer-vehicle collisions. The latest study by State Farm Insurance companies puts the Commonwealth in 11th place. Since 2010, the state has averaged 111 deer-vehicle collisions reported annually, but those numbers are probably underestimating the actual events according to Dr. Katherine Edwards, the county’s wildlife management specialist.

“The real number could be three or four times higher than that,” said Edwards, noting that the Virginia Department of Transportation is called to pick up 1,500-1,600 deer carcasses each year and that field work has also shown that probably only 25 percent of the deer who are hit actually die on the roadside.

Edwards, along with Sgt. Earit Powell of the Fairfax County Police Department, and Kristen Sinclair, an ecologist with the Fairfax County Park Authority, are the county officials charged with the supervision of the program and they have been hosting a series of public information meetings prior to the launch to explain the logistics and answer any questions or concerns from citizens. The trio have already hosted two meetings; one at Fairfax County Government Center, and a second at the North Government Center in Reston.

THE SESSIONS OPEN with a bit of history explaining that public safety was the impetus behind the development of the program. Following a fatal deer-vehicle collision in 1997, and public demand for local government to address the issue of deer population, the Board of Supervisors mandated that a strategy to control the deer population in the area be put in place. The strategy addressed public safety concerns and also the increasing damage being done by the deer to private property and ecosystems of public parklands,

Powell heads the deer harvest operations. Edwards is the wildlife management specialist, and Sinclair is the expert on all things related to the natural environment which the deer inhabit — and which they are in danger of permanently damaging.

The over-browsing of the parklands by deer is “hindering forest regeneration,” said Sinclair, by their consumption of seedlings and saplings, shrubs and bushes, changing the very composition of the forest over time.

Gathering accurate data on the deer population and their ecological impact continues to be challenging, Sinclair admits, but efforts have been increased and scientifically improved over the last several years.

She oversees hundreds of “browsing plots” throughout the county’s park system and in conjunction with the Northern Virginia Regional Park Authority.

The ecologist provided data showing that the impact of unchecked deer populations on parklands allows for the proliferation of non-native, invasive plant species and slowly erodes the biodiversity of these habitats.

“Over-browsing by deer can lead to a loss of ecosystem services,” said Sinclair, “negatively affecting native plants, insects and birds in the area.”

THERE ARE THREE methods of deer harvesting that the county employs, all permitted under the Commonwealth’s Department of Game and Inland Fisheries: archery, managed firearms hunts, and sharpshooting conducted at night by police personnel in closed-park situations.

The hunters must complete a bow hunting education course, pass proficiency tests and criminal background checks before being assigned to a hunt cluster under the oversight of a cluster supervisor. Each hunter has a personal ID number and their equipment should be marked with that number. All activity by the hunters is logged into a database within 24 hours and are monitored.

“They are also required to field dress any deer they harvest, and to remove the carcass covered and as discreetly as possible,” said Powell.

The hunts are conducted from 30 minutes prior to sunrise to 30 minutes past sundown. Parks remain open during the harvests, but Powell notes that every precaution to protect citizens is taken. Hunting can only be done from raised deer stands using the ground as the backdrop. Hunters must remain 100 feet from any private property line, and at least 50 feet from a trail. Entering private property is strictly prohibited without the consent of the property owner.

“We have had zero safety incidents,” said Powell, “and we work diligently to keep things that way.”

Questioned about “wounding rates” versus proven kills, Powell insists that every effort is made to track “unrecovered hits.” Powell himself can take to the woods to try and find a wounded animal or determine if the deer died later from the hit. The wounding rate between 2014-2018 is between 4-to-7 percent. “But even that is too high,” added Edwards, who vows that they will keep working to reduce that number.

Hunting deer as a method of controlling their population is not always met with approval. Some residents object to destroying an animal that is just trying to survive in a vanishing wilderness. But as Edwards explained, other, non-lethal methods like tagging deer with birth control drugs or sterilization “just haven’t proven effective or are cost prohibitive, although we continue to stay up to date with the latest research and will adjust our program accordingly.”

THE DEER MANAGEMENT program is ultimately about public safety, said Edwards, “and the protection of the environment, and about helping sustain a population of healthy deer as part of our natural surroundings.”

There is one more public meeting scheduled for Thursday, Aug. 16, at 7 p.m. at the Mount Vernon District Police Station Community Room at 2511 Parkers Lane in Alexandria. A complete list of the parks where deer harvesting will take place, and the methods that will be employed at each, including dates for managed firearm and sharpshooting operations, is available on the county’s website at www.fairfaxcounty.gov/wildlife/deer-management-program. The site also provides historical data on the numbers of deer harvested in past operations by location, by method, and by sex and more information about the logistics, requirements, and frequently asked questions.

Edwards, Powell and Sinclair welcome comments and questions from residents of the county, and are more than willing to speak with local groups, HOAs and other organizations, or private citizens looking for advice on how to coexist with hooved neighbors. Their contact information can be found on the website.