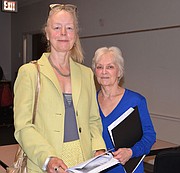 From left: Melissa Klein of Braddock, and Kathie Sowell of Vienna attended the meeting, and raised concerns about the use of archery as the predominant method for controlling the deer population.

Look for signs like these posted to show that the area has been included in the deer management program.

Counting the actual number of deer that populate Fairfax County might be an impossible task, but there are ways to calculate the impact that deer have on the community. That on-going data collection gives county officials the means to determine that the deer population is still “unsustainable for the health of the environment and the safety of our residents,” according to Katherine Edwards, Ph.D. Edwards is the county’s wildlife management specialist, and was one of three panelists who presented the details of the upcoming 2017-2018 Fairfax County Deer Management Program to a small group of citizens at a public meeting on Aug. 10 at the Government Center.

Joining Edwards to inform the attendees and to take questions and comments at the meeting were Sgt. Earit Powell with the Fairfax County Police Department, and Kristen Sinclair, ecologist III, county Natural Resources Branch, who is responsible for much of the data collection.

The presentation was divided into three major areas of impact by the wandering ruminants: safety concerns, health concerns, and ecological damage. It is within the first and third of these concerns that the numbers can best be gathered, analysed, and used to justify the county’s management program and aid in developing the best approach.

ACCORDING TO STUDIES, Virginia is considered a “high risk” state, ranked 13th in the nation in 2016 for the number of “Deer-Vehicle Collisions” (DVCs), with chances being 1 in 94 of involvement in such an incident. Police records between 2010 and 2016 record an average of 72 DVCs reported annually. A preliminary analysis of records from the Virginia Department of Transportation (VDOT) adds an estimated 1,500-1,600 deer which are picked up from roadsides in Fairfax County. Since it’s approximated that only about 25 percent of deer that are struck by vehicles actually die at the scene, it’s understandable that officials believe that the actual number of DVCs may be significantly higher than those reported.

Edwards and Sinclair told the attendees that the county is working to gather data from a number of sources that are now maintained separately to get the most accurate data.

Sinclair described the efforts to most scientifically measure the ecological damages being done by deer over-population, using hundreds of “browsing plots” throughout the both the county’s park system and in partnership with the Northern Virginia Regional Park Authority. It’s an ongoing study, with data collected on a rotating basis over a number of years, to study the changes.

Deer aren’t just grazing in open parkland, said Sinclair. They are consuming seedlings and saplings, bushes, and shrubs, as well as “hindering the forest regeneration.” The plots show that the very structure of the forest is impaired, significantly changing the forest composition and leading to a loss of “ecosystem services like clean water and air. It ultimately destroys biodiversity.”

The Fairfax County Deer Reduction program was originally approved by the Board of Supervisors in 1998, but didn’t really get officially underway and under intense supervision until several years later. Today’s program, said Edwards, is based on best practices for deer management and peer-reviewed scientific literature. The current state-approved control methods are archery, firearms managed hunts, and law enforcement sharpshooters and the program is now managed by the Fairfax County Police Department, with Powell in charge.

There are dozens of regulations relating to who may participate, how each form of reduction is managed, and how to best ensure the safety of the public and of the hunters, themselves. Strict recordkeeping is mandated. “A number of hunters were disqualified last year,” said Powell, “not because they did anything unsafe or against the rules in terms of the actual harvesting of deer. They didn’t keep the records that we require. So they were out.”

Powell also noted that in many cases, the hunt group leaders, or other hunters reported the failures of their peers, because “they want to do this right, safely, and be accountable.”

One man expressed concerns for himself and neighbors, as homeowners near deer hunting locations, but Powell insisted that there have been no reports of any injuries to citizens, only accidents to the hunters. “Mostly falls, or other injuries often typical of time spent in the woods.”

THE ARCHERY PROGRAM is the county’s number one method of deer population control, accounting for 95 percent of the 1,092 deer harvested last year by 627 sanctioned archers, working 18 designated archery clusters. The archers donated 44,881 hunt hours, but only 10.4 percent of hunting attempts resulted in deer harvests.

It is the use of archery as the mainstay of population control that caused some concern and pushback by the few residents in attendance.

Melissa Klein from the Braddock area said she understood the need for controlling the deer population, but felt like relying so heavily on archery “wasn’t a 21st century solution.” She and Kevin Rose, district wildlife biologist for the Virginia Department of Game and Inland Fisheries who was in the audience, entered into a bit of a debate on the use of birth control to reduce the numbers of deer. Both referred to a study in a controlled population of deer in Maryland, using the drug PZP. After some back-and-forth between the two, Rose ultimately stated that the experiment was a failure, in part because of the transient nature of the deer, as they moved in and out of areas and among herds, and because the “balance between births and deaths” is not being achieved by that method.

Kathie Sowell of Vienna also shared some concerns, relating a particularly gruesome encounter with a deer, still mobile, but with an arrow through its eye.

Phil Church of Fairfax had similar objections. “The wounding rate for these animals is what bothers me.” Church also agreed that control of the population was needed, but questioned the reliance on archery, when it was “impossible to say how many of the deer wander off wounded, or how long it may take for some of them to die, or to be tracked by the hunter and finished.”

Church and others wanted to know why sharpshooting couldn’t be the more employed methodology, since there was agreement that it would be “more humane.”

“Logistics and cost. That’s honestly the answer,” said Powell. Having paid law enforcement personnel off the job to handle the deer population is just not efficient or in the budget.

There were no easy answers forthcoming from the officials to the objections, but there were promises to continue to look for other methods, to review the program, and to consider public safety at all times.

The program will begin on Sept. 1, and run through Feb. 24, 2018. No hunting will take place on Sundays. To learn more about the program and to see which parks are included, go to the county’s website www.fairfaxcounty.gov, type in “Managed Deer Hunts” and follow the links.