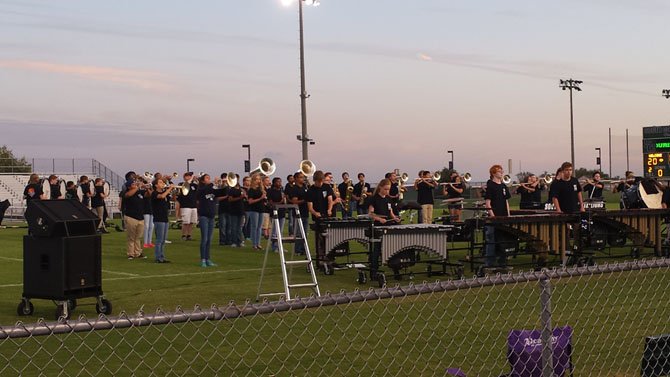 The South County Band performed during the race. All funds go toward supporting the band, new uniforms and new turf for the school’s football field. Photo by Marissa Beale/The Connection 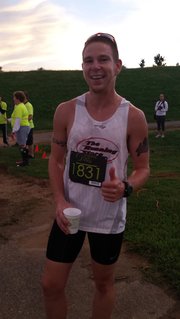 The inaugural Twilight Rock ‘n’ Run drew a nice-sized crowd to South County High School on Sept. 13, a cool Saturday night. The 5K race was sponsored by the South County Band Boosters to raise money for the band and for Turf SoCo, an initiative to raise money for new football field turf. The top three finishers, male and female, for each different age category, were awarded medals, and a raffle immediately followed the award ceremony. Runners, old and young, had positive things to say about the event. “I’m looking forward to next year’s race,” said runner Manish Patel, 50, who signed up on-site at the event. Competitors were as young as 9 and as old as 60. “It was a good run,” said Ray McGrath, 57, who ran the course in just over 30 minutes. “I have two kids in the band and am happy to support the campaign for new turf.” Currently, the school’s band uniforms are more than 10 years old, according to Carla Olivo, vice president of communications for the South County Band Boosters. But this fundraiser helps meet financial goals for the band’s needs. Rob Bell, 25, was the fastest runner of the night, running the roughly 3.1-mile course, the equivalent of five kilometers, in 17:18. Bell, who ran in college, trained earlier that morning to prepare for the run, and ran at an average pace of 5:34. The second winner, overall, was Meghan Hughes, 35, who finished in 20:06, running at an average pace of 6:29. “It was fun to just come out and support the band,” she said. The third overall winner was 14-year-old Carl Stierle from Lorton, who is on the cross country team for South County. He ran at an average pace of 6:31, finishing the entire course in 20:14. “My coach said to take it easy, but to prepare I did a mile in the morning,” said Stierle. Many came out to show their support for the runners, the band and the school’s community. Other top finishers include second-place female runner Emme Cate Heilbrun of Fairfax Station, 11, who finished the course in 20:30 and third place female runner Kristen McCann, 42, who finished at 21:05. For guys, Bell, Stierle, and 16-year-old Ryan Conley from Lorton, placed first, second and third, respectively, overall.