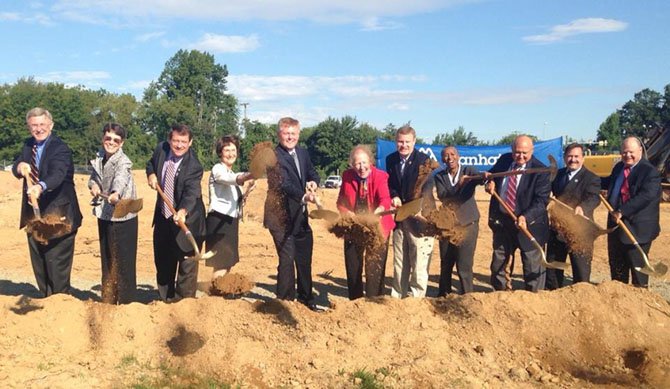 Chairman Bulova addresses other Supervisors and the media before the official groundbreaking of the new Public Safety Headquarters.

The Fairfax County Police and Fire Departments are getting a new home. On Tuesday, Sept. 16, Board of Supervisors Chairman Sharon Bulova and Supervisor John Cook broke ground on what will be a $142 million, eight-story headquarters.

“I look forward to having the Police and Fire Department staff move into a new, quality facility on the Government Center campus,” said Bulova. “This new headquarters offers many improvements and efficiencies that will meet the growing needs of our community and our public safety family.”

The 274,000 square-foot building won’t be completed until 2016 and the safety officials aren’t scheduled to move in until 2017. In the meantime, they’ll continue to occupy the Massey building, a 1960s-era structure that was home to all Fairfax County government until 1991.

“After years in a building with a leaking roof and asbestos, this new public safety headquarters will give our police officers and firefighters the tools they need to continue to lead their fields,” said Cook.

Funded in large part with Economic Development Authority revenue bonds, the new building will be a “green project” that’s designed to meet LEED Silver standards. It will be the first building in the county lit entirely by energy-saving LED bulbs.