Police and Fire are out of the Massey Building. 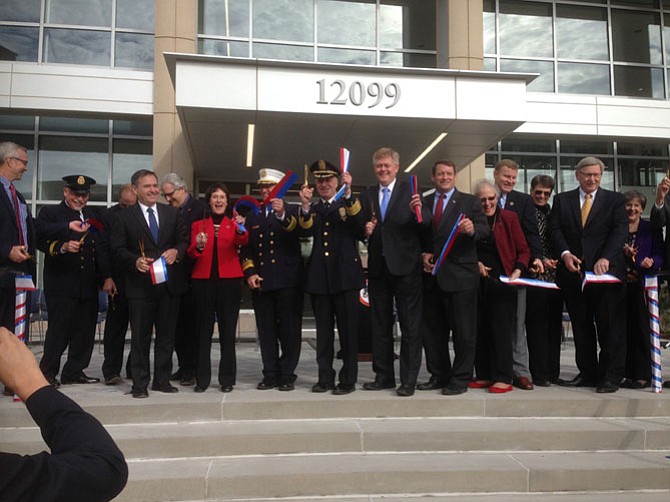 All hands on the golden scissors to open the new Public Safety Headquarters. Photo by Mike Salmon.

Out front, a bell is part of the memorial to fallen police and firefighters. 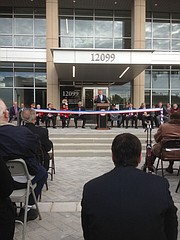 The Fairfax County Government Center took another step towards maximum efficiency on Thursday, Oct. 26 as officials cut the ribbon on a $142 million building to hold the fire and police headquarters under one roof, co-locating the departments to improve connectability.

“It makes absolute sense to have both departments together,” said Sharon Bulova, chairman of the Board of Supervisors. “It’s a much, much improved work environment,” she added.

Bulova was on ribbon-cutting duty with the other supervisors from various districts, Fairfax County Fire Chief Richard R. Bowers, Police Chief Col. Edwin C. Roessler Jr., past chairman Kate Hanley and James Patteson, the county director of Public Works and Environmental Services. The new building is LEED (Leadership in Energy & Environmental Design) certified at the silver level, and is a major improvement over the Massey Building, as many in the group reminded the crowd.

“The Massey Building, in the City of Fairfax, needed to come down, its time has passed,” said Supervisor Pat Herrity (R-Springfield).

“We had to get it done before the Massey building collapsed,” joked Supervisor John C. Cook (R-Braddock).

“The Massey Building once had its heyday,” added Bulova.

It will be the third headquarters for David M. Rohrer, the deputy county executive who’s been with the county for 37 years. “It has been worth the wait,” he said.

The Massey Building was built in 1970, when asbestos was a common fireproof building material used, and it had outdated electrical and cooling systems that were hard to repair, according to the Fairfax County website.

The new nine-story building is dominated by glass and green features such as low-flow plumbing, permeable paving, rainwater harvesting equipment and LED (light emitting diode) lighting throughout. The architect that designed it was HOK, Inc. and the builder was Manhattan Construction. The building was “below budget and almost on time,” said Patteson.

Out front, there are memorials erected to commemorate police officers and firefighters who died on the job through the years. They were put in front because “we want everyone to pass by and see the sacrifice,” said Bowers. In years past, there was a softball field on the spot where the new building is, noted Bowers, but the new office “really is a field of dreams,” he said.

There is also a tree out front that they managed to hold on to, despite the cranes and equipment coming and going through the two-year project. “We saved the tree as we promised,” said Patteson.

With a new building, advanced technology and two public safety departments co-located for further efficiency, will the residents of the county feel safer? “The protection is always there no matter what building they’re in,” said Ellen Rohrer, who was at the ceremony.

The new Public Safety Headquarters is next to the Herrity Building, named after Herrity’s father John Herrity who was a past chairman, he pointed out with a smile.