Play depicts human dignity and justice during the 1970s Apartheid. 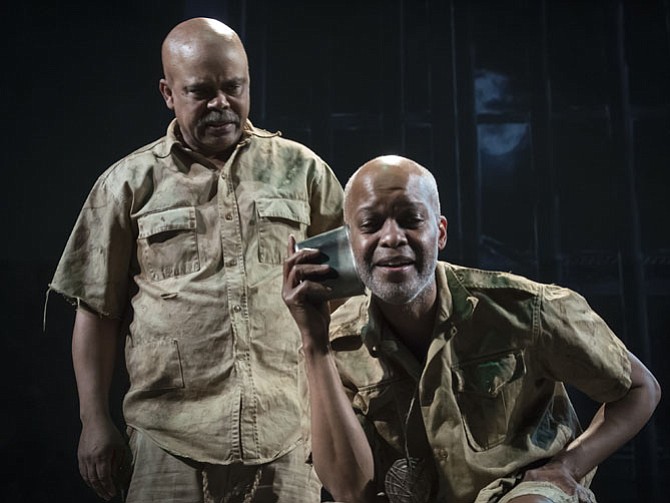 As part of the 30th anniversary season, MetroStage in Alexandria is staging "The Island" now through April 26. The highly charged two-person play is set on Robben Island, South Africa, and depicts the plight of two political prisoners, John and Winston, as they perform labor by day and rehearse Sophocles’ "Antigone" by night.

Devised by the playwright Athol Fugard, with two actors John Kani and Winston Ntshona, the play originated in the early 1970s when South Africa’s Robben Island was where many famous political prisoners were confined. MetroStage produced the play in 1992 with Doug Brown in its original production. He has returned to play the character of Winston along with Michael Anthony Williams, who is playing John.

"It is a classic written during Apartheid, during the 1970s, and yet its themes of solidarity, endurance, perseverance are timeless," said director Tom Jones. "It was and remains a dramatic collaboration that, at its core, is a celebration of human dignity and freedom in the face of insurmountable oppression."

Producing Artistic Director Carolyn Griffin said the show touches on everything important in a dramatic work.

"It is highly political since it depicts the plight of the political prisoner in South Africa under apartheid law," she said. "At the same time it is timely, timeless and universal in that there will always be highly charged political situations in parts of the world where there is oppression and incarceration."

She added, "It is a psychological study of incarceration, isolation, bonding under the most challenging circumstances — man’s inhumanity to man — and ultimately the triumph of the human spirit. It makes a political statement but also addresses the most fundamental human needs, hopes and desires for freedom, community, and family."

Fugard’s use of the Greek story of "Antigone" is a metaphor used to depict the political protest of the black South Africans in apartheid South Africa who fought the state and were imprisoned on Robben Island, the most famous being Nelson Mandela.

"So the power of the play, the statement it is making and the ingenuous use of the play within a play 'Antigone,' which serves as a symbol of the individual’s resistance to the state, a situation analogous to the prisoners incarcerated for protesting the apartheid law at the time, makes 'The Island' a masterpiece of dramatic storytelling which will live with the audience well beyond the close of the play," said Griffin.

He added, "Honoring those things to which honor belongs — that's the last statement of the play."

Michael Anthony Williams, who plays the role of John, said, "It's important to see this play because it gives an opportunity to look at people to the left and to the right of you and decide how their presence impacts their spirit."

He added, "People need to see this because nobody really realizes the impact of their actions to the left and right until they're put in closed quarters."

Jones said the human spirit and capacity to remain stalwart when severely tested remains as a unifying thread amongst diverse populations.

"Mandela and King are exemplary of that ideal but not solitary in their resolve. All of us are capable of being resolute in the face of danger in any time when social orders threaten to undermine dignity. 'The Island' preserves and celebrates human possibility," said Jones.

He said because the play is a delicate balance of harshness and levity, the challenge was "maintaining that dramatic/comic symmetry."