Three Republic Candidates Have Their Eyes on the Prize
Votes

Three Republic Candidates Have Their Eyes on the Prize 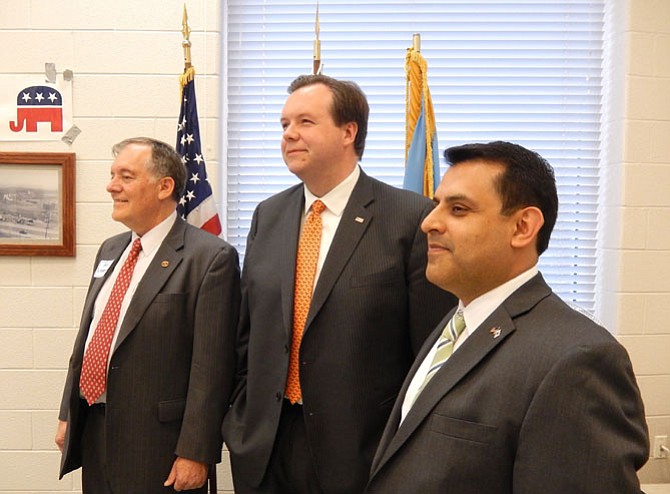 With their eyes on the prize are (from left) John Litzenberger, Brian Schoeneman and John Guevara. Photo by Bonnie Hobbs. 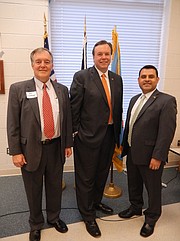 Facing the audience and preparing to debate are (from left) Brian Schoeneman, John Litzenberger and John Guevara.

School Board member Kathy Smith will be the Democratic candidate hoping to replace the retiring Michael Frey (R) as Sully District supervisor. But the Republican candidate will be chosen April 25, between 10 a.m. and 4 p.m., at a Firehouse Primary at Westfield High.

That’s because three Republicans — John Litzenberger, Brian Schoeneman and John Guevara — are vying for the job. So to help voters choose which one they’ll vote for, the trio held a debate Monday night, April 6, at the Sully District Governmental Center.

Fairfax County Clerk of the Court John Frey moderated, asking questions provided by the audience of about 50 people.

Q: Will you hold the line on taxes?

Guevara: “I’ve knocked on over 1,200 doors; people tell me to roll back taxes, and businesses say, ‘Get rid of the BPOL tax.’ There’s over 15 percent vacant office space in Fairfax County, and having the BPOL tax, too, doesn’t help the economy. We can’t raise taxes ’til we get our economic house in order and grow the businesses here in Sully.”

Litzenberger: “You grow the economy and grow the tax base and keep the tax rate the same. Taxes are chasing businesses out of Fairfax County. And you’ve got to decrease the property-tax rate when home assessments go up.”

Schoeneman: “If we reject the BPOL tax, we’ve got to find $150 million in revenue to replace it — and (similarly) for the property-tax rate. So we need to fund core government services, while cutting other spending and services. I’d increase the number of jobs to increase the tax base.”

Litzenberger: “To get the Democrats on the Board of Supervisors to go along, you need good negotiating skills, and I’ve been able to do it. I also chair the CIP Budget Committee.”

Guevara: “You can’t negotiate with tax-and-spend liberals. We need new leadership to attack the problems attacking our businesses today. That’s how the economy grows.”

Schoeneman: “Republicans on the Board of Supervisors need to provide an alternative budget that funds our priorities and shows our ideas.”

Q: Instead of using the Centreville Labor Resource Center

(CLRC), some [day] laborers still stand outside the library, waiting for jobs. In 2002, [some places passed] legislation making loitering illegal. Would you bring its enforcement to the supervisors for a vote?

Litzenberger: “Having them hang out on the corner is wrong. We need to pressure elected federal officials to make the borders secure. I’d bring it before the board and watch it get defeated [since the board’s mainly Democratic].” Schoeneman: “I’d bring it up for a vote and, if it failed, I’d find another way to get them out of there. The problem is that they’re not doing anything against the law. People keep hiring them from in front of the library; they should go to the CLRC instead. And make sure the contractors [that people] hire don’t hire from [the street].”

Guevara: “I commend Michael Frey for supporting the CLRC. People need to voice their opinions to their federal officials. If standing there were made illegal, I’d support it 100 percent.”

Q: Residents are concerned about cell-phone towers in their neighborhoods. What’s your position?

Schoeneman: “We need to balance the need for public safety with the rights of the residents. We’d need to do it on a case-by-case basis. The towers are ugly and detract from property values.”

Litzenberger: “I’ve fought [some] battles over them. But people like their cell phones and tablets and want good service.”

Guevara: “A tower also brings in money to the school allowing it. Yes, they’re ugly, but they’re getting better. Our needs for data and public safety drive the need for cell towers; and this public/private partnership with companies is essential to growing the economy.”

Q: The community at large opposed the roundabout [at Pleasant Valley/Braddock roads]. Will you force the project’s reevaluation?

Guevara said he’d do it if that’s what his constituents wanted. Litzenberger said he tried for a stoplight there, instead, to no avail. And Schoeneman said the decision’s already been made, the project’s going ahead and the Sully supervisor probably couldn’t do anything about it by the time the winner takes office in January.

Q: What tax cuts would you reverse or make?

Schoeneman wants to reverse the library cuts. He’d review every core government service to see if it’s needed, doing what it should and doing it efficiently. Guevara doesn’t want SACC (School Age Child Care) funding cut. And he’d consider automating some jobs to eliminate some full-time county employees and save money.

Litzenberger would also restore library funding. “The school system is still driving $11 million of bus seats around for kids who drive themselves to school,” he said. “I’d cut that money and give $7 million of it to the libraries.”

Q: How would you vote on affordable housing projects?

“It depends how you define ‘affordable,’” said Schoeneman. “We need to not subsidize people who can afford it, but the people struggling to get by.”

Litzenberger is against subsidized housing, but for low-cost housing that helps grow the economy and is near new businesses. Guevara said affordable housing should have an incentive for economic growth. “But at WFCM, I’ve seen teachers come in for groceries and gas money,” he added. “So it’s important to have compassion and lend a hand.”

Q: Do you support the supervisors’ pay increase?

All three candidates were against it. Guevara said School Board members shouldn’t receive raises, either, especially when the economy isn’t growing. “It’s a slap in the face to county residents,” he said. Litzenberger called the raises bad for county employees’ morale, and Schoeneman said he’d donate the extra $20,000 to charity.

Q: What’s the biggest problem facing the supervisors? How would you solve it?

Schoeneman said there’s a “crisis in confidence” in government and supervisors should be more open and transparent so voters can trust that their elected officials are doing the right thing. Guevara said transparency takes courage and everything should be on the table when making budget cuts. Litzenberger said the main issue is the $100 million budget shortfall and, if people are open and transparent, they’ll develop new ideas to reduce spending.

Guevara: “We need to keep Sully Republican. I’ve talked to people and gotten to know the issues affecting Sully District. You want to elect a supervisor who’s lived here a long time, but also a fresh, new face that represents our party and reflects our conservative values to defeat Kathy Smith in November.”

Litzenberger: “Based on my 12 years working for the county, I know how to get things done. And I’ve worked with both Democrats and Republicans on the Housing Authority and Planning Commission to accomplish things. You’ve got to talk with residents and business owners, and I’ve got the time to do it. Remember my name on April 25.”

Schoeneman: “You’ve got three, solid candidates; but this race is about making the board do what we want to do and represent the citizens of Sully. So in the next 19 days, find out about us. Elections are about who you think is the best person for the job. I’m going to work for your ideas and dedication.”