People at Work: Mind the Mat

Laugh, dance and sweat—yoga combines it all. 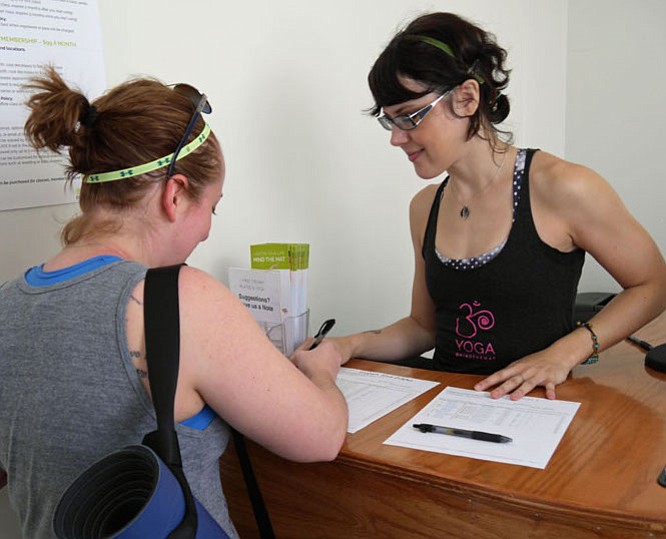 Laura Schwartz, director of programming at Mind the Mat yoga studio in Del Rey, beckons Danielle Locher to step up and sign in for the Flow 1 class. Photo by Shirley Ruhe/Gazette Packet

Paige Lichens, yoga instructor and director of operations at Mind the Mat, chats with students waiting for the Pilates Boot Camp to end and their 75-minute Flow 1 yoga class to begin.

The door opens and a crowd streams out the door clutching mats as Pilates Boot Camp is over. Smiles line the lobby waiting to sign in for the next class. Katie walks to the desk and stops to say hello. Paige Lichens, yoga instructor at Mind the Mat in Del Rey says, "Her husband just started."

Katie adds, "It has become a usual Friday night event for us."

Sabrina is a regular but today she has come to get a little relief from a visiting mother. Lichens explains, “Sabrina was fighting her mat.”

“Once we got that solved, it helped me tremendously with my stress level,” Sabrina says.

Lichens points out yoga is a 5,000 year old practice and Pilates is more recent, and Laura Schwartz director of programming, says it began as a therapeutic method, for war veterans and ballerinas and it evolved into a mind-body exercise. Lichens says they try to find a solution for everyone and sometimes she sees a light go on in their eyes "when they get it."

Lichens says, we can laugh, dance and sweat."

"Get in the child posture, allow hands to reach out. Breathe; feel the transition. Think ‘I just had breakfast at the Del Rey café and have to work off the French toast.’” Four rows of multi-colored mats line the dimmed room as Lichen begins the 75-minute Flow 1 yoga class. Reflections stare back from the wall of floor-to-ceiling mirrors. The class has started off with a seated meditation, then a sun salutation moving the body one moment one direction, and then the other direction. Lichens says this is a class for beginners or those who are returning to yoga and is offered three times a week. "I consider myself not a teacher, but a guide. We have people of all ages." Today's class ranges from a teenager and a first time stop-in to a young adult with her mother who has had a hip replacement.

Lichens had been a CPA for 15 years and a recruiter for accounting for nine, but when she broke her back in a skydiving accident, she started yoga, she started yoga, taught for over six years (the last two at Mind the Mat) and recently became director of operations. She took 200 hours of training over four months to become licensed in yoga. She explains that Pilates grew out of yoga; it's core activity — standing up, sitting, and lying down. Now she is "almost done with 500 hours of training. I go to workshops; you never stop training."

Lichens had arrived at 7:45 a.m. and worked all alone getting supplies to all floors, making sure the floors are clean, lining up the mats and handling the phones. She is also in charge of the retail phase. Then last night she taught hot, gentle yoga. "I teach five classes and often put in 12-hour days."

When the economy slows down, "the business takes a dive. I love Marilyn Monroe's quote that when you're hurting financially, you focus on food." People may not come as often, but yoga is like your life, " she says. "You can take a break and come back." Lichens explains sometimes people find their body has changed so they offer a large variety of classes. “I had a woman this morning who was taking the pre-natal class and said she had to accept what is physically going on and do different classes. And we have elderly people with balance problems who get therapeutic assistance from certified instructors during the week. And a hot room on the top floor."

"Straighten the legs, inhale coming forward. Repeating the same motions can make your mind wander. Let it go." They move on to "flap like a seal-ARF." Half an hour to go. Shhhh, class in progress.