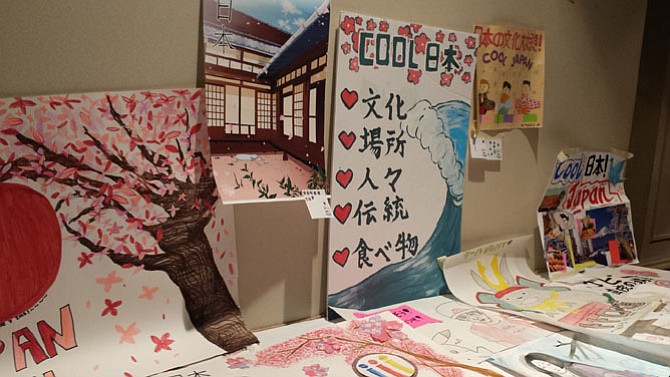 Every year, high school students studying Japanese have a chance to participate in the National Japan Bowl, a competition that tests their knowledge of Japanese history, language, culture and more. Some of the country’s top language students make it to D.C. to compete; however, more than just classroom attendance is required in order to do well.

The Level 4 team from Thomas Jefferson High School for Science and Technology was made up of (From right) Katie Shen, Oakton; John Serger, Great Falls; and Zeal An, Chantilly. They were awarded fourth place in Friday’s competition.

“The Japan Bowl has never had a focus on just textbook knowledge,” said Ambassador John Malott, president and CEO at the Japan-America Society in Washington, D.C. As much as 80 percent of the questions asked go beyond what students study in class, requiring them to have a truly in-depth understanding of Japan as a whole.

In the preliminary rounds of competition, the students are divided into levels based on how long they have studied Japanese. These initial rounds consist of 100 questions that the students answer in teams. The three teams with the top scores from each different level face off in a National Championship round.

IN THIS YEAR’S COMPETITION, held at the National 4-H Youth Conference Center in Chevy Chase, Md., 185 students from 36 high schools across the country participated.

The National Japan Bowl has captured the attention of Japanese audiences, including Japan’s largest broadcasting network, NHK. Portions from this year’s competition were broadcast in Japan via the Network as well.

Thomas Jefferson High School for Science and Technology (TJHSST) student, Austin Riopelle, from Ashburn, was filmed by NHK, for his Japanese studies. He also competed in this year’s Japan Bowl with other students from his school.

“They interviewed Austin showing how American students prepare for the competition,” said TJHSST Japanese language teacher Koji Otani. “They are interested in schools that regularly appear in the Japan Bowl.” In the 2014, TJHSST students competing at Level II of the competition earned second place overall, and won a trip to Japan.

The Level 3 team from Lake Braddock Secondary School came in second place in this year’s National Japan Bowl competition. (From left): Aven Kelly, Burke; Mimi Le, Fairfax; and Chaeun Park, Burke. Last year, the team did a homestay in Osaka for their competition success, and also got to visit sites throughout Japan.

The Level 2 team from Lake Braddock Secondary School, made up of Sophia Cheung, Angela Wang and Rachel Blatt was awarded third place.

And while victory is exciting, winning is not the only goal teachers have for their students.

“This is a really good opportunity for students to learn something that is impossible in the classroom,” said Hayfield Secondary Japanese teacher, Kyoko Vaughan. “My goal is for my students to be interested in Japan throughout their life.”

Each year, the Level 4 National Champions are awarded a trip to Japan. In 2014, multiple teams were able to go thanks to an invitation from the Government of Japan under the “Kakehashi Project.” The announcement has yet to be made about whether as many students will be going to Japan this year.

"At least two teams will be able to go to Japan this year, thanks to a grant from the Mazda Foundation,” said Ambassador Malott. “There is a possibility that we might be able to obtain additional funding (from another source), and if we do, more students can also join the trip."

Students are excited about their language studies and would love for the program to continue.

“The language is not as hard as people make it out to be,” said sophomore Mia Delmonico, who was on West Springfield High School’s Level 4 team in Friday’s competition. “People are intimidated by Kanji.”

The Japan-America Society created the Japan Bowl in 1992 to encourage students studying Japanese. According to the Japan Foundation, there are over 60,000 American high school students learning the language, and the largest numbers of Japanese learners today are in high school, not college.

“When you look at the number of jobs directly related to Japan and the amount of direct investment, the number of Japanese speakers outside of Japan is increasing,” said South Lakes Secondary School Japanese language teacher, Adam Podell. “Japan is a huge contributor to international development.”

From left -- TJHSST students Tanvi Haldankar, from Herndon, and Austin Riopelle, from Ashburn, preparing for their round of the competition. Haldankar began her Japanese studies in the immersion program at Fox Mill Elementary School.

This year the Board of Trustees granted their permission for the Japan Bowl to expand overseas. The competition has already grown across the country, with local competitions in California, Utah, Wisconsin, Kentucky and Illinois.

“We’ve been participating since the first year,” said Lake Braddock Secondary School Japanese language teacher, Keiko Abrams. “Last year, [our level 2 team] was third, so they went to Japan. They get to visit many places that tourists can’t go. They got to stay with a host family.”