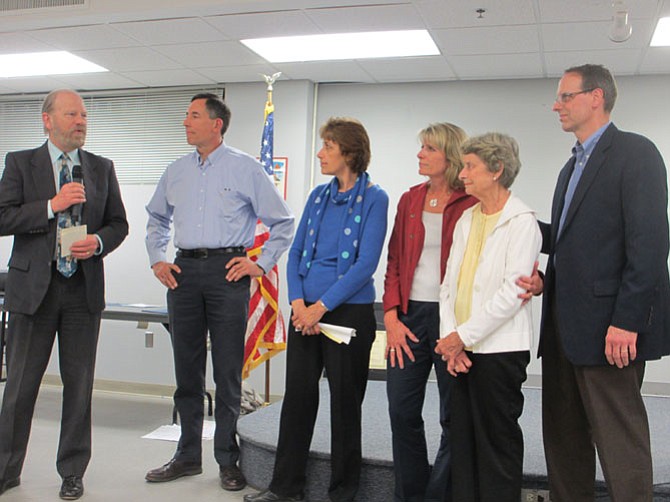 Roy Baldwin was among several colleagues of Rotarian and SCOV member Keith Bodamer who recalled Bodamer’s selfless dedication to the community. Mayor Laurie DiRocco presented the Mayor’s Award to Keith Bodamer posthumously. Accepting the award were Bodamer’s wife and children [first, second and third from right]. Photo by Donna Manz. 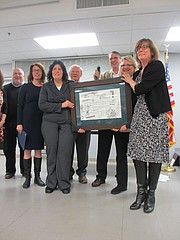 The Carole Wolfand Award for outstanding community service by a business went to Tracey Zambito of Whole Foods Vienna and Whole Foods. More than 35 volunteers were recognized for their contributions to the Vienna community at the 14th Annual Mayor’s Volunteer Reception.

More than 35 volunteers were recognized for their contributions to the Vienna community at the 14th Annual Mayor’s Volunteer Reception held on April 14 at the Vienna Volunteer Fire Department’s Flame Room. Mayor Laurie DiRocco proclaimed April 14, 2015, Volunteer Recognition Day in the Town of Vienna.

“You start off thinking, ‘I’ll give back to the community,’” said DiRocco. “You end up getting so much in return.”

DiRocco and Vice-Mayor Carey Sienicki awarded certificates to the honorees. Business owners and neighbors were nominated by Vienna residents. Volunteers were recognized for a myriad of contributions, from clearing snow from a neighbor’s yard to organizing major Town events.

The Mayor’s Award went to Vienna Rotarian Keith Bodamer posthumously, and several of Bodamer’s friends and colleagues remarked on his legacy. “There was hardly an aspect of life in Vienna that Keith wasn’t involved in,” said Roy Baldwin.