Fairfax County Chamber of Commerce (Fairfax Chamber) announced winners for the 1st Annual Greater Washington Innovation Awards, the premier event celebrating the thought leadership, innovation, and creativity of individuals and organizations in select industries in the Greater Washington metro area. Winners were announced live at the April 20th awards gala at the Hyatt Regency. The event began at the outdoor Reston Town Center Pavilion and later moved to the Hyatt Regency Reston. 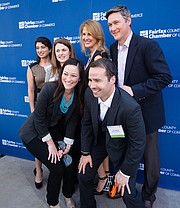 Photo provided by the Fairfax Chamber of Commerce

In addition to recognizing the most innovative organizations in the region, the awards honored an Innovator of the Year and a Lifetime Innovator. “The 2015 Greater Washington Innovation Awards Winners represent companies that are shaping the future of business as we know it,” said Jim Corcoran, Fairfax Chamber president and CEO. “We applaud each of the winners for their contributions to the Greater Washington business community and beyond. They are true leaders.” Also attending the event were local dignitaries and officials including state Del. Ken Plum (D-36), Fairfax County Supervisor John C. Cook (R-Braddock), and Congressman Gerry Connolly (D-11th).

This year’s winners are:

*Innovator of the Year award went to Emanuel Petricoin, Ph.D, University Professor and Co-Director, Center for Applied Proteomics and Molecular Medicine in the School of Systems Biology, George Mason University.

Businessman and former Del. Joe T. May was honored by the Fairfax County Chamber of Commerce with an award for Lifetime Innovator. May represented Loudoun County in the General Assembly for two decades and founded EIT LLC, a technology and manufacturing company in Sterling, in 1977. May remains chairman of the board and chief technology officer. “Joe May and Chip Petricoin represent leading innovators in their fields, and we are thrilled to honor them this year,” said Fairfax Chamber president Corcoran.

To learn more about the Fairfax Chamber, visit www.fairfaxchamber.org.