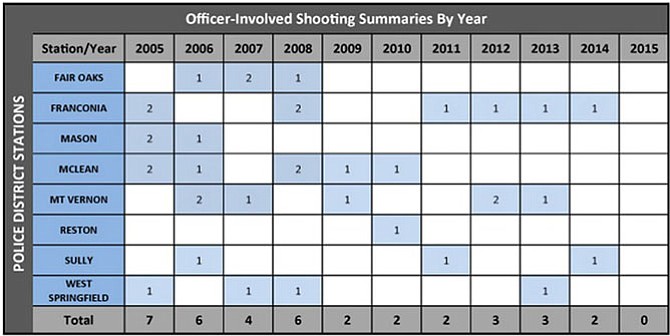 Summaries of 37 cases of officer-involved shootings, between 2005 and 2015, are searchable by year or location through the police department’s website. Image courtesy of Fairfax County Police Department 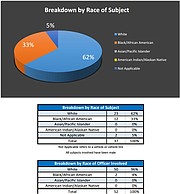 Charts on the new Fairfax County Police Department officer-involved shooting website give a demographic breakdown of the incidents.

The Aug. 12 Use of Force subcommittee meeting began with a discussion of the Fairfax County Chief of Police Edwin Roessler’s public release of brief summaries of every officer-involved shooting going back to 2005.

Though the summaries do provide more information that had previously been released, they do not mention victims’ names or officers’ names who were involved. Members of the subcommittee questioned whether the summaries were complete enough or sufficient to help that body with its mission of crafting suggestions for policy changes.

“The people who’ve prepared this are in the best position to see if these have policy issues embedded in them,” said Sal Culosi, who is also a member of the full Ad Hoc commission to review police policies. “The Police Department is in the best position to help us identify … If they can’t do it, we’re not going to be able to do it.”

Subcommittee and commission member Mary Kimm raised the possibility of requesting access to full incident reports for “three, five, seven cases, to see if we can find out a little more about it? A couple might help us understand the procedures.”

Roessler confirmed that rather than grant unrestricted access to incident reports, several subcommittee members will participate in a “pilot effort” where they’ll be able to ask dedicated police staff questions related to particular cases. Those staff members will have access to the files.

Roessler said the first such meeting is being scheduled in the near future.