Action items approved include use of force and communications recommendations from Ad Hoc commission. 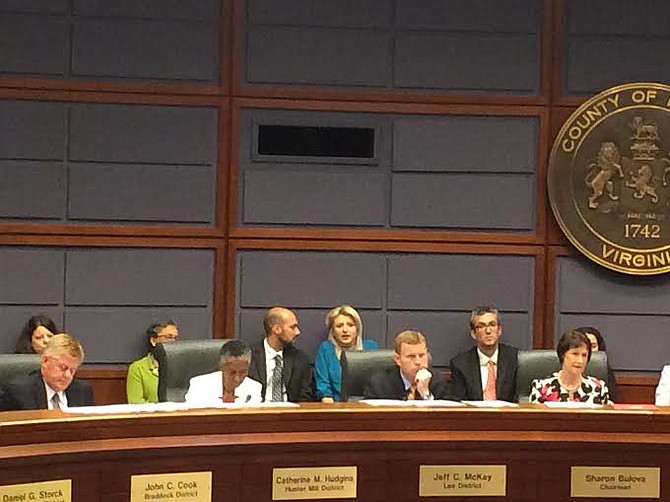 The board approved action items, which would formalize the governing body’s intent to continue implementing recommendations from the Ad Hoc Police Practices Review Commission.

The Board of Supervisors recognized members of the Ad Hoc Police Practices Review Commission in the audience on June 21, while representatives from the group Showing Up for Racial Justice displayed posters referencing the in-custody death of Natasha McKenna.

The possibility of body cameras being worn by Fairfax County Police officers and the release of officers’ names involved with critical use of force incidents dominated discussion during two action items in the Board of Supervisors June 21 meeting.

The board approved both action items, which would formalize the governing body’s intent to continue implementing recommendations from the Ad Hoc Police Practices Review Commission.

Public Safety Committee chair Supervisor John Cook (R-Braddock) said real power and authority for the Police Department comes “not from the weapons they’re provided but the confidence of the community.”

The Ad Hoc Commission met in 2015 and submitted 142 recommendations to the Supervisors in the areas of use of force, communications, mental health and Crisis Intervention Team training, recruitment, diversity and vetting, and independent oversight and investigations.

Police Chief Edwin Roessler and Board of Supervisors Chairman Sharon Bulova have said that a number of the recommendations have already been implemented or are in the process.

IN ITS ACTION, the board endorsed Roessler’s goal of re-engineering “use-of-force policies to reinforce the guiding philosophy that reverence for the sanctity of human life [as] paramount in service to our community.” The philosophy includes new de-escalation and decision-making techniques and more sensitivity to individuals with mental health issues.

Direction from the board includes having the chief provide factual information briefings to the board within 30 days on all officer-involved deployment of deadly force or officer-involved critical incidents where someone died or sustained life-threatening injury. The briefings would continue at intervals of no more than every 90 days, or as requested by the board.

Body cameras were one of the Ad Hoc Commission’s recommendations

Roessler called the cost of implementing body cameras “staggering,” but that he was standing at the board’s direction to move forward.

Supervisor Jeff McKay (D-Lee) reminded the board they are waiting for pending legislation to be resolved in the 2017 General Assembly session that could have a bearing on body cameras.

“I support that,” he said. “I have concerns about the Freedom of Information Act implications. We need to wait and see what they do.”

For Supervisor Kathy Smith (D-Sully), the 18 months of waiting is too long.

“There are other localities doing this,” she said. Smith brought up the idea of doing a limited pilot project with cameras.

Bulova said the body cameras issue is more complex than most people think.

“What should be the deal with data collected from body-worn cameras?” Bulova asked. “Then once collected, who has access? How do you block out people who were innocent bystanders, captured on the film?”

The board directed the chief to continue research and development of equipment recommendations, best practices and policies, and budget estimates, and to make recommendations on body worn cameras to the board in calendar year 2017.

Use of Force subcommittee from the Ad Hoc Commission chairman Phil Niedzielski-Eichner said he was “very pleased with the outcome” of the vote to approve the action items. “It’s clear the supervisors took the committee’s recommendations seriously.”

Niedzielski-Eichner said there’s still work to be done, however, with recommendations on body cameras and electronic control weapons (or tasers).

“These are two our committee felt were important for preventing the chance of officers being involved in deadly use of force incidents,” he said. “We insist they’re still important.”

Niedzielski-Eichner plans to meet with Roessler, Bulova and Cook to continue to push those recommendations from the commission.

With regards to communication, Cook said the key to that action item was the board endorsing a predisposition for the police department to disclose information.

The possibility of body cameras being worn by Fairfax County Police officers and the release of officers’ names that are involved with critical use of force incidents dominated discussion during two action items in the Board of Supervisors June 21 meeting.

“We learned that we needed to get on one page and have clear policies and procedures for how and what we’re going to communicate,” Cook said.

“This is what the community is looking for,” said Supervisor Cathy Hudgins (D-Hunter Mill), “what we should be doing in order to establish the fact that we are open to dealing with issues that are difficult as long as we can be transparent with the community in doing so.”

Supervisor Pat Herrity (R-Springfield) said while he argued for releasing former officer Adam Torres’ name in the case of the 2013 shooting death of John Geer that effectively prompted the creation of the Ad Hoc commission, he isn’t in favor of making the regular release of officers’ names policy.

TO DO SO, he said, creates a risk for officers involved with critical use of force incidents and their families.

“I have yet to hear a stated public benefit to disclosing their name other than the public should know,” Herrity said. “And that’s not enough for me to put the officer and family in danger.”

Roessler, however, said he has already implemented policy by which he will release the name of an officer involved in such an incident within 10 days from the event. That period allows his department to do a risk assessment.

If Roessler believes the name shouldn’t be released, his policy is to articulate to the public and supervisors what his reason is. “It needs to be credible,” he said.

The next meeting of the Board of Supervisors Public Safety Committee will take up recommendations from the Independent Oversight and Investigations subcommittee and is scheduled for July 19 at 1 p.m.