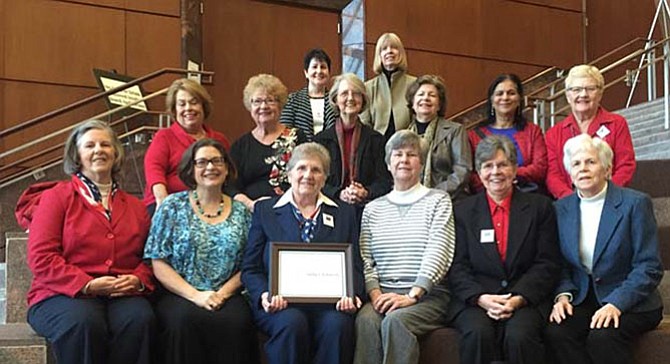 Sidney Johnson, of the League of Women Voters of the Fairfax Area, receives the Barbara Varon Award for improving community through volunteer service. Photo contributed

By Hellen Kelly and Peggy Knight

The Fairfax County Board of Supervisors presented the Barbara Varon Award to Sidney Johnson, Voter Services chair of the League of Women Voters of the Fairfax Area (LWVFA), on Nov. 17. The award was created to honor Barbara Varon, who served as chairman and vice chairman of the Fairfax County Electoral Board. It is awarded annually and shows appreciation for a county resident’s “dedication to improving the community through volunteer service.”

Johnson, in her volunteer position as Voter Service chair for three years, has organized and participated in many voter registration drives as well as in a variety of voter outreach projects. She reached out to a variety of diverse groups to increase voter participation and has been especially passionate about getting underrepresented citizens engaged in activities that are civic, including voting. She has coordinated and overseen the publication of various voter guides such as Facts for Voters, the Voters’ Guides, and a handout that lists all issues as well as candidates on the ballots. This year Sidney organized 13 Meet and Greet Candidate Forums throughout Fairfax County, with the help of volunteers. These forums aimed to inform the public and give voters an opportunity to meet and interact with the candidates as well as to learn their positions on the important issues. In an attempt to reach more voters, Sidney helped organize the first televised Meet and Greet forums for the candidates for the Senate, House of Delegates, Sheriff, Clerk of the Court, and Soil and Water Commissioners.