‘Your Vote, Your Power’ 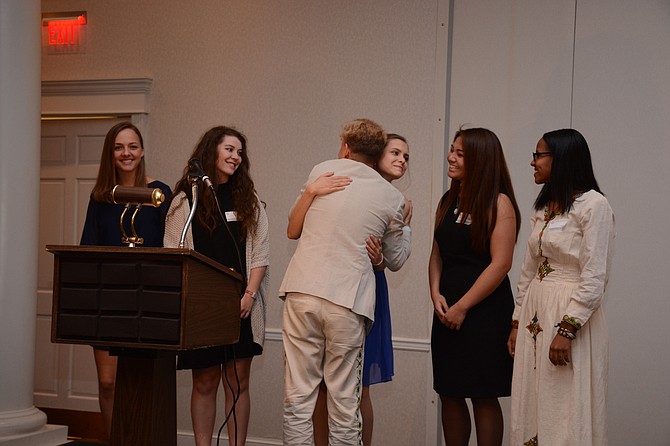 The Students for Change, as their group is known, were among several recipients of awards at the 70th Fairfax County NAACP Freedom Fund banquet, held Sept. 19 at the Waterford reception hall in Springfield. There were two president’s award winners, including the students, and two community service award winners.

“These are students who saw that a change needed to be made and made that change,” said Fairfax County NAACP president Shirley Ginwright. “They didn’t worry about the repercussions.”

The students have gained support through a petition and are working to connect more with community members in the Falls Church neighborhoods that feed Stuart prior to a Fairfax County School Board vote scheduled for early 2016.

Now, the girls are trying to raise awareness in their school, including sharing a new video they shot the same day as the awards. Over the summer, they also met with members of the Fairfax County NAACP who offered support and guidance.

The students have reached out to School Board members, including Mason District representative Sandy Evans. They met with Evans, “but everyone is staying neutral until after the election,” Marcotty said.

Del. Scott Surovell (D-44) received the second president’s award in recognition of his work on the revitalization of the Route 1 corridor and keeping the Hybla Valley and Gum Springs communities involved in the process.

In his acceptance speech, Surovell told the story of his grandparents moving to a Fairfax County farmhouse from Brooklyn in 1935. As politically active and progressive Jewish people, “They joined the only organization who would take them,” Surovell said, “the NAACP.”

Surovell said his grandmother told him stories about gaining the right to vote, the poll tax and desegregating schools in Fairfax County. “It’s a sound base to guide my actions going forward,” he said. “We still have a lot of work to go.”

Community Service awards went to Debbie Kilpatrick, president of the Fairfax County Council of PTAs, and Celeste Peterson, who, together with her husband Grafton created the Erin Peterson scholarship Fund in honor of their daughter who died in 2007 at Virginia Tech.

Keynote speaker for the afternoon was Eric Broyles, a Washington, D.C.-based attorney and co-author of the book “Encounters with Police: A Black Man’s Guide to Survival.” Broyles spoke briefly about the book, explaining how it was co-written with his best friend, who is himself a cop.

But the majority of Broyles’ speech focused on the mantra “Your vote, your power; It’s your vote or your blood” as a pathway for change. He talked about the importance of African Americans registering to vote and being more engaged with the democratic process.

“Most police officers are honorable, good people,” Broyles said, but there can be some bad officers and bad leadership, which is why it’s important for more African Americans to “get involved in the electoral process.”

At the conclusion of the awards, president Ginwright announced the organization’s plan to promote Virginia General Assembly bills for raising the felony robbery charge amount from $200 to $850 and having records expunged in certain circumstances.