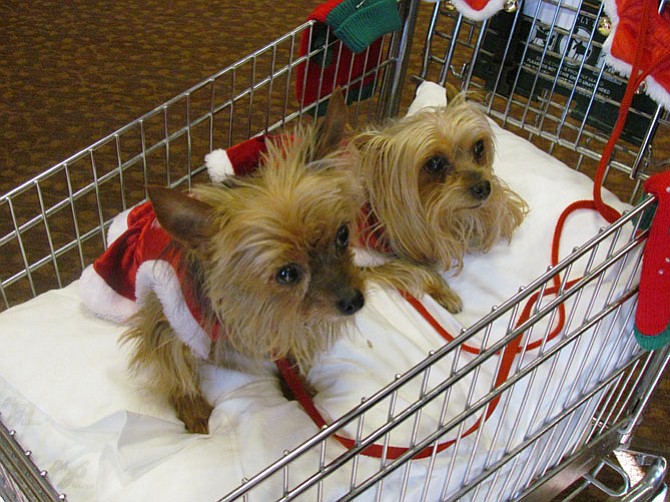 Yorkshire Terriers, Itsy and Bitsy, are staples of the Greenspring pet parade, loyally attending each year in their favorite mode of transportation – a shopping cart. Itsy and Bitsy are the dogs of residents Freda Burner and Hazel Cross. Photos by Jessica McKay

Jumper, an English Setter and Golden Retriever mix, joined the parade thanks to residents Derek and Rosemary Cundill.

Nearly 40 dogs “paw”ticipated in this year’s Holiday Pet Parade at Greenspring retirement community in Springfield. The dogs, who pranced along the runway donning their most festive holiday fashions, were those of residents, staff members and special invited guests.

More than 200 attendees packed the Hunters Crossing Conference Center for the parade and saw a variety of unique dogs from a Catahoula Leopard mix to a Schnoodle to a Havana Silk Dog, and many more. This year’s special guests included two Newfoundlands, Blue and Sammi, as well as a Boxer named Zuni, and two Bernese Mountain Dogs named Rolex and Jaimee. Several of the dogs who participated in the parade were also rescue dogs, adopted from a variety of organizations including the Fairfax County Animal Shelter and Lucky Dog, among others.

Each year, the Holiday Pet Parade is sponsored by the Dogs of Greenspring, a resident-run and resident-coordinated social group on campus. Greenspring is a pet-friendly community featuring miles of walking paths and its very own “Bark Park” supporting dog (and owner) socialization. The very first pet parade was held at Greenspring in 2003.