Chantilly/Centreville: ‘We Are All God’s Children’
Votes

Chantilly/Centreville: ‘We Are All God’s Children’

The motto of the Ahmadiyya Muslim Community is “Love for all, hatred for none.” Its members condemn violence, terrorism and Jihad and, instead, believe in morality, justice, peace and tolerance. 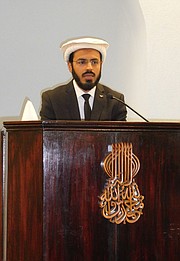 Imam Rizwan Khan: “The taking of any life is a crime against humanity.” 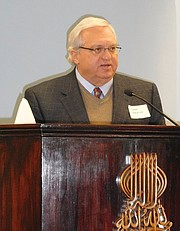 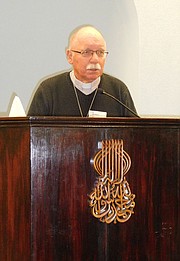 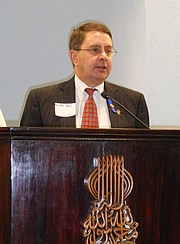 So they were both saddened and horrified by the recent murders in San Bernadino, Calif., at the hands of suspected terrorists. And last Tuesday, Dec. 8, the Ahmadiyya Muslims held a community, interfaith prayer vigil for the victims at their Mubarak Mosque in Chantilly.

“As a faith-based community, we believe in the power of prayer,” said spokesman Fouzan Pal. “And in times like these, we believe prayer comforts the souls of the victims of tragedy. The perpetrators claimed to be ‘Muslims’ — and we, as peace-loving Americans, are left to handle the backlash. When it comes to true Islam, there’s nothing to be fearful of — only when it is perverted.”

To the 90-some attendees, he said, “I invite you to join us as good, human beings to educate people about Islam. Muslim-youth radicalization is a problem that affects all of us, and we’d be happy to go and speak in any of your schools to clear up this misinterpretation of Muslims.”

Imam Rizwan Khan then sang a verse from the holy Quran, saying that “Whosoever kills a person shall be as if he has killed all mankind.” Khan said that “We, as Muslims, believe in the true, divine origins of the teachings of Judeo-Christianity. All life is sacred and equal, and the taking of any life is a crime against humanity and against God Almighty.”

He said people all over the world die in terrorist attacks every day. “Extremists are called terrorists because their purpose is to inflict fear,” said Khan. “And they are enemies of all peace-loving people. They try to strike divisions between us by means of that terror. So Muslims must extend a hand of love to the victims.”

He said that, whenever there’s a terrorist attack by one group of people, others tend to blame everyone in that group — but they shouldn’t. An example, said Khan, would be to unfairly blame all Evangelical Christians for the attack on the Planned Parenthood in Colorado by a man who considers himself a member of that group. He said the same holds true for Muslims.

Khan said those shot and killed in San Bernardino “were my victims, as well as your victims. It’s a collective loss for all of us. We, as Muslims, value all human lives, and we can never allow these lost lives to become a means of distance between us. Most of the time, middle-ground people get caught between the extremists and the terrorists; and the innocent victims are caught between these two extremes, too.”

Quoting Martin Luther King Jr., he said, “Injustice anywhere is a threat to justice everywhere.” Furthermore, said Khan, “To establish justice is a collective responsibility. The only way to eradicate these tragedies at their root is to establish justice.”

“All life is sacred,” he continued. “The terrorists want to create fear between us and spread misinformation about us. But peaceful, moderate people are the vast majority of Muslims.”

Speaking next was the Rev. Dean Majette, senior pastor of Ox Hill Baptist Church in Chantilly. “As a brother in faith, it’s a privilege for me to extend to you the greetings of our congregation, he said. “We know the majority of people in this world are good. The Old Testament describes Jesus as the Prince of Peace, and my prayer is that we’ll know the peace that our faiths offer.”

Jerry Foltz, founder of Wellspring United Church of Christ in Centreville and chaplain of the Centreville Volunteer Fire Department (Station 17), also addressed the crowd. “Some people call themselves Christians and do hateful acts and spout evil, but we need to be beyond that,” he said. “We give up our fear by celebrating the good news of God’s love — and that love helps us have the willingness to help one another.”

He said he’s grateful for area residents’ solidarity with the Ahmadiyya Muslims. “Blessings to you and to our Centreville-Chantilly community,” said Foltz. “And I look forward to more opportunities to support one another.”

The last speaker was Supervisor Michael R. Frey (R-Sully). “It’s been such a difficult time for our country, and we’re facing situations like San Bernardino more frequently,” he said. “So it’s important that we reach out to each other in solidarity. We are all God’s children, and we are all in this world together; and we must stand together if we’re to make a good life for our children and for future generations. We’ve got to believe that’s what everyone wants.”

He said there are ‘those who seek to spread hate and have those of one faith question another. But we’re not going to allow that to happen. When I go to our schools, I see that there’s no better place for people to learn about different faiths and cultures. And I’m convinced, 20 years from now, we’ll be in a generation of leaders who’ll grow up and live their lives the way we wish we could.”

So, said Frey, “We need to tell the terrorists who try to instill hate, ‘We won’t allow it.’ No matter the differences in our upbringing, we are all the same.” He noted that, when the idea to build a Muslim mosque in Chantilly was first proposed, there was “a huge, collective welcome. And what a proud, happy and joyous day it was for so many when it opened. I’m proud to call you my friends, and I respect and appreciate what you’ve done for our community. We will get through this together, as we have in the past.”

Everyone then joined in prayer for the San Bernardino victims and their families.