‘Small Candle of Hope in a Troubled World’
Votes

‘Small Candle of Hope in a Troubled World’ 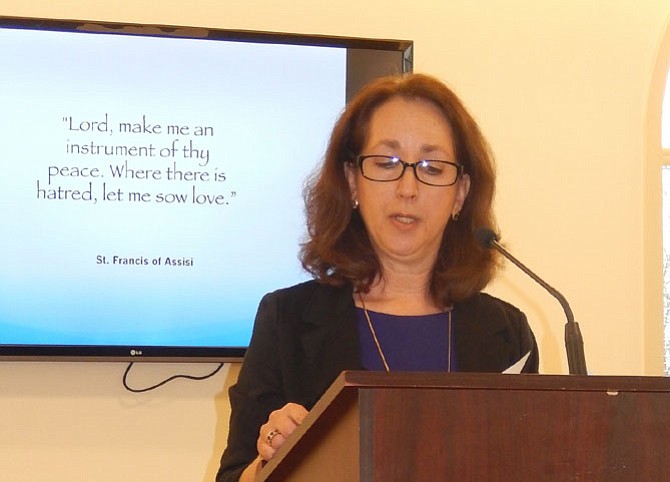 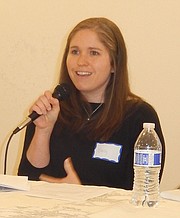 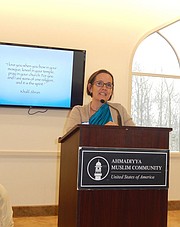 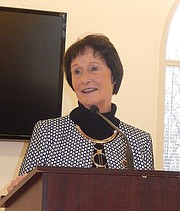 Sometimes it takes a woman to lead the way — or, at least, to plant the seeds of a good idea. And that’s what happened when the Women’s Association of the Ahmadiyya Muslim Community hosted an interfaith dialogue on peace.

Women of several different religions, including Fairfax County Board of Supervisors Chairman Sharon Bulova, gathered March 12 at the Mubarak Mosque in Chantilly. There, they discussed “How Women of Faith Can Contribute to Building Peaceful Societies.”

“In light of Women's History Month in March, we felt the need to highlight the role women play in the world,” explained the association’s Farida Sheikh. “Religion can be a powerful tool [against] hate and violence. Our community strongly believes that all faith traditions promote a teaching of tolerance and peace.”

Welcoming the nearly 60 people attending was the association’s Sahar Choudhary. “Our community is an advocate for universal human rights and peace in the world,” she said. “Our motto is ‘Love for All, Hatred for None.’ There’s a lot of division in our country and world, especially in light of the political rhetoric we hear. But we feel religion can break down barriers and promote peace in society.”

The first speaker was Emily Nichols of New Life Church. “Mothers crave safety for their children and want them to live in a peaceful world,” she said. “Our faith is important for us, [but] we long for connections with others and can agree that we have differences. Those things make us who we are.”

“But our world is lacking faith and we want to do something about it,” she continued. “So it begins with you and me; we need to recognize the problem within ourselves. Could something in our attitudes, thoughts and feelings need to change first?”

Nichols said the most vital element in creating and sustaining peace is forgiveness. “But we don’t always want to forgive,” she said. “So we must choose to move forward and not make the other person feel the hurt they caused us. This is why there’s so much violence in the world today — because we won’t forgive perfectly. And we forget the times we’ve wronged others. So to create and sustain peace, we need God to forgive us and empower us to forgive others.”

A follower of Hare Krishna and the teachings of the Hindu Bhagavad Gita, she said, “We believe in equal vision and see the spark of the divine in every, living creature. And we believe that true peace comes from loving and being loved. The things that bring us together are the giving and receiving of food and gifts, and sharing conversations. It’s important to reveal your mind to God and listen for His answer.”

Pediatrician Susan Kohn represented Temple B'nai Shalom/Sisterhood of Salaam Shalom. “We base our Jewish religion on the Torah, prayer and acts of loving kindness,” she said. She also noted that, when her grandmother came to America at age 14 in 1920, “The U.S. welcomed people of all cultures, beliefs and nationalities. Today, is our golden door truly open?”

Growing up, she said, “We had many discussions of how to be a better person and how to improve the world. We also learned about acceptance of others and welcoming strangers. Our temple invites other churches to our events and, together, we actively pray for peace in our homes and in the world.”

One of her temple’s branches also holds an annual Muslim and Jewish Women’s Conference. “It’s to build trust, respect and sustainable friendships between Muslim and Jewish women,” said Kohn. “We want to light a small candle of hope in a troubled world.”

They also have a sisterhood of Muslim and Jewish women. “We talk about our diverse backgrounds and beliefs and how we can support each other,” said Kohn. “We discuss how our religions nourish us, and we hope that how we treat and care about each other will trickle down to our friends and community. I believe — through inclusion, education and conversation — each of us can become an instrument to create peace in our community and in the world.”

Representing the Women’s Association of the Ahmadiyya Muslim Community was Bushra Mirza. “We live in turbulent times; waves of racism and prejudice are sweeping the world,” she said. “So how can women of faith confront this tidal wave of distrust and hatred?”

“In our faith, we’re taught to raise our children with love and compassion and to maintain peace within our homes and community,” she continued. “We’re committed to improving the lives around us, volunteering at food banks and shelters and helping women become independent business owners. And we encourage higher levels of learning to empower women to become active members of society.”

Mirza said they’ve also helped people in need around the world. “Islam literally means peace,” she said. “Extremist groups like ISIS rely on ignorant people to promote their agenda. But we want to remove the misconceptions about true Islam, which believes in universal human rights, equality and peace. We believe no people are superior over others, all people are equal and we can only achieve peace by celebrating our commonality and our differences.”

Board of Supervisors Chairman Bulova, too, said, “This is a difficult time in our country where we hear people saying terrible things about Muslims — including our possible leaders — and that’s not right.” She then recalled when she was Braddock District supervisor in 1995 and there were proposals to change how the county gave services to people in need.

“So I brought people of different faiths together to discuss it, and one woman asked if churches talked to each other and to county government,” she said. “The seed was planted that, if we shared the kind of programs and services each house of worship provided, we could leverage those to help people. It wasn’t about religious dogma — it was about community outreach, and that was the beginning of Faith Communities in Action.”

Bulova also related how, after county officials and the Northern Virginia Regional Commission visited Turkey, they started a blanket drive for the refugees there. With help from Faith Communities in Action, houses of worship and the county’s Office of Community and Interfaith Liaison, they collected blankets, coats and jackets and shipped them to Turkey.

“A delegation went there to oversee the distribution and discovered a note tucked into a coat pocket. It read, “I hope this will keep you warm. You’re in my thoughts and prayers.”

“I hope it was translated to let the recipient know someone in Northern Virginia cared about them,” said Bulova. “This was an example of a little thing that turned into something more. And today, we’ve come together to learn about each other — and I’m convinced that, in promoting peace, little things like this can make a difference.”

The event ended with a silent prayer, preceded by moderator Sandra Chisholm reading this quote from Martin Luther King’s widow, Coretta Scott King: “I am convinced that the women of the world, united without any regard for national or racial dimensions, can become a most powerful force for international peace and brotherhood.”