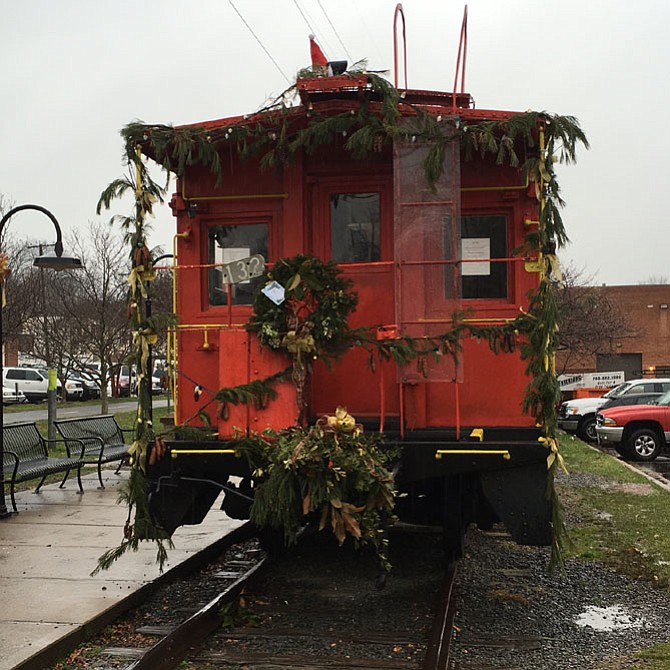 The red caboose, permanently stationed in the Historic Church Street Corridor, is decked out in festive greens crafted by the Ayr Hill Garden Club. The Optimist Club of Greater Vienna maintains the caboose.

Not much in the way of earth-shattering events happens in Vienna and not much changes there every year … and that’s the way most residents like it. The top news story of 2015 is the closure of the Vienna Community Center during its 1 1/2-year renovation and expansion, Phase 1.

A close second is construction of a mixed-use building – retail and condos – on Church Street …. Don’t forget the new artificial turf at Waters Field …

Re-opening of the community center, phase 1, is scheduled for January, 2017.

Phase 1 plans call for expansion of the center by 15,000 square feet and for LEED (Leadership in Energy and Environmental Design) certification.

The enhanced facility will have a bright new lobby and a high school regulation-sized gym.

The renovated community center will have a new lobby and entrance as well as a new 9,000-square foot high school regulation-sized gym/court at the back of the building.

The Town of Vienna budgeted more than $10 million for the project.

The vacant lot owned by Arrington Properties LLC will house a two-story, 9,000-square-foot mixed use building on the property fronting Church Street.

The private/public parking garage originally proposed three years ago did not proceed.

Work to replace the turf at Waters Field was expected to be completed by Dec. 11.

Community athletic teams, from baseball to lacrosse and football, use the field throughout most of the year.