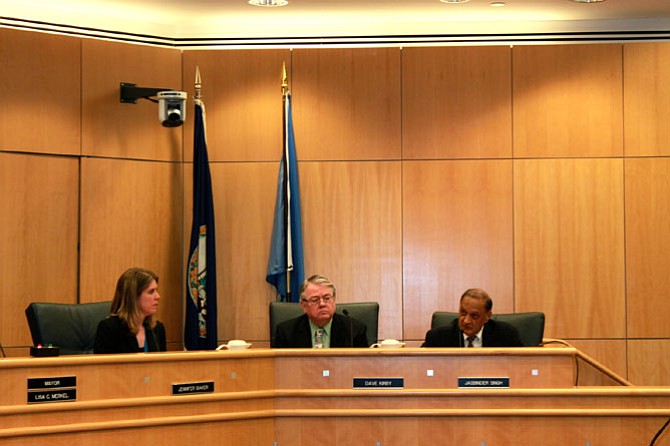 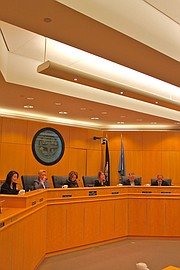 Council members at the Jan. 27 meeting.

A prior incident between a council member and the town manager lead to an impromptu motion.

Council member Jasbinder Singh motioned for a resolution at the Jan. 27 meeting calling for the town manager - currently Arthur Aselene - to give council members any material they want to decide on resolutions.

“I move to reaffirm a council member’s unabridged and unambiguous right to receive, and the town manager’s duty to provide any and all documents, memos, files, reports, working papers, emails and any information that has been and can be used for legislative purposes, without questioning a council member's motive or his integrity, without debate,” Singh read from his proposal.

Many of the council members disagreed they have had problems when requesting material. The motion failed 2-5.

Singh said the issue happened in 2010 when he tried to obtain enforcement files from a case.

“After an intense discussion and a great deal of tension in the council meetings, I asked Mr. Kaufman (Richard - town’s attorney) for his opinion,” he said. “And he said any and all files are available for me to review, including the enforcement files of the particular case.”

In the last month, Singh took that 2010 advice and requested information about a property being discussed by the town council. He said Aselene “flatly refused to give that information.”

Aselene was given the opportunity to voice his side of the situation per the request of Mayor Lisa Merkel. He noted the request was for an appraisal on a land transition discussed in a closed meeting.

“At that time, the mayor directed staff to make that information available to the council in the town manager’s office, which was so done,” he said.

The other request was for information given to staff “in a confidential manner.”

“We went back to that business manager afterwards and verified their willingness to share that in a more public setting.”

Merkel noted the motion had not been brought up prior to that meeting and it was a lot for the council members and town to digest in one night.

“I always felt the staff was extremely attentive to our requests for information,” said council member Grace Wolf. “I have never - in the almost five years I’ve been on council - been refused any item of data.”

Vice Mayor Jennifer Baker said she felt the timing for the motion was not appropriate and that a better time would be at a work session where more discussion could be brought to the table.

During the Singh’s last comments directed at Aselene, Merkel stated she was becoming uncomfortable with the direction the conversation was going.

“Following the vote, I invited Council member Singh to meet with me to further discuss his concerns,” she said in a statement following the meeting. “I look forward to his call.”