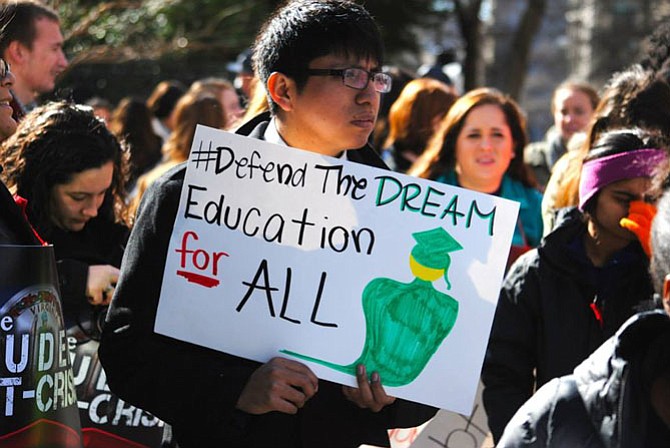 Students shared stories about debt, and what they want Virginia legislators to do about it.

Twelve students from George Mason University traveled to Richmond with the Virginia Student Power Network, rallying and calling for debt-free education, and for increased educational opportunities for undocumented students.

Rodrigo Velasquez, a junior at Mason from Springfield and GMU Student Power’s organizer, was one of the 12 from Mason who also went to Richmond.

“These are students in the country through no fault of their own,” said Velasquez. “They pay property, sales and income taxes in the Commonwealth and do all of these things that are required to qualify for in-state tuition, but they still have to pay out-of-state costs.”

The students sat in on Education Committee meetings to inform members of the committee on just how many students are aware of the decisions being made that are affecting education. Afterwards, there was a time for students, recent grads and even high school students to share stories about limited access to education and how student debt was affecting them.

“I believe that the cost of tuition is turning education into a commodity that only the privileged can afford to obtain,” said Samantha Parsons, a junior from Hurt, Va., at Mason, and co-founder of GMU Student Power. “I do not think our legislators are taking student debt seriously, but it needs to become a focal point of our state’s agenda.”

While it may seem simple and straightforward to either grant or deny rights to undocumented students, the situation is actually a lot more complex.

There were well over 70 students who traveled to Richmond from all across Virginia, on their day off from school.

“Being undocumented is more of a spectrum than a binary,” explained Velasquez. “Some students may be waiting to see if they can achieve citizenship status, before they can continue with their education.”

Further complicating the problem for students is that a lot of them don’t know that they are undocumented because their families may not have told them.

Turning a keen eye to legislation in place, Velasquez and other students want lawmakers to hear what these students have to say.

Describing what he says are “hateful” bills, Velasquez, as well as other students in GMU Student Power, are against the bill by Senator Richard Black of Loudoun County that would take away in-state tuition privileges for Deferred Action of Childhood Arrival (DACA) students and Temporary Protective Status (TPS) Students. The students also oppose a second bill by Delegate David Ramadan of Loudoun that would take away in-state tuition and fees for students that are eligible for in-state tuition through DACA. Instead, these students would have to pay out-of-state costs.

“A lot of people don’t realize they are interacting with undocumented students, especially since some of these students are high achieving and some of the hardest workers,” said Velasquez.

“The growing costs of higher education are becoming too normalized on this campus and in this state, but starting life with $25,000 or more in debt is not normal,” said Parsons. “We have to stop acting like it is.”