Highlighting contributions by the Latino community.

Each September, the President of the United States proclaims “National Hispanic Heritage Month.” Nothing in the document says contributions by Hispanics must or should be restricted to a single month. Arlington Historical Society and the County’s Parks and Recreation Department make that point in a program scheduled for Feb. 10 at Arlington Mill Center.

Traits found in the Latino community are not theirs alone. Other immigrant groups have embraced the same values.

The measure of any cultural impact can be expressed in numbers. How many restaurant signs on the way to work say “pollo” this–or-that? How many public performances of folk music and dance are held throughout the year? Such an approach says something about cultural impact, but it is shallow. The common attributes of a people have deeper meanings, because their roots are found in hearts and minds of the many individuals comprising a group. The variety of national customs across Central and South America serves to add layers of enrichment when observed in Northern Virginia.

County Board member J. Walter Tejada, originally from El Salvador, has made a name for himself in politics, mostly at the county level but sometimes as an advisor to Virginia governors and as a congressional staffer.

His personal views on the ways Hispanics influence and enrich Arlington and its immediate surroundings begin with quiet reflection. Looking beyond foods, fiestas and the local Spanish language theater, Tejada recited a number of traits he thought common among Hispanics regardless of their national origin.

Above all, Tejada said, “The family is sacred.” Next, he continued, “is a work ethic second to none. We ‘work our tails off,’ and learn to produce high-quality results no matter the task at hand. A desire to succeed is natural with us.”

Two other characteristics common across Hispanic communities are expressed as a couplet: Religion and charity. Tejada detects an automatic urge to reach out in support to anyone in need. He illustrates this with a real-life incident some years ago in Fairfax County. Concern about “overcrowded apartments” resulted in the idea of a ban on sleeping in spaces outside bedrooms. In neighborhoods populated by Hispanics, this suggestion was incomprehensible. If a relative or friend in need had no place to sleep, who would even think of denying use of the sofa in a living room?

Finally, and with a smile, Tejada whispered, “We are an ‘outdoor people.’ On the playing fields and in the parks,” he said, “we have changed the face of Arlington, ‘weather permitting’.” 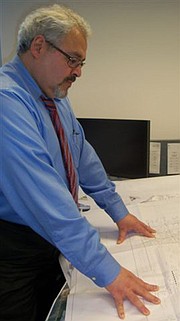 Luis Araya, at his office.

Following a career of active teaching at many levels, Emma Violand-Sanchez, Ed.D., reached a milestone upon election to the Arlington County School Board. Asked about Latino culture not limited to her Bolivian heritage, she echoed Tejada’s first and foremost emphasis on “family.” “Family is the center of our values and our lives,” she said. “It reflects an outlook that is more ‘we’ than ‘I’.” This explains why others in the community are apt to see Latinos in group activities, be it sports and festivals or simply Sunday picnics in the parks. Beneath what can be seen, such scenes reveal that “family” means “extended family,” Violand-Sanchez said.

The other essential insight to Latino culture offered by Violand-Sanchez is an intense belief in the value of education. Mention the word and her face brightens and becomes animated. The promise of education always has attracted Latinos to the United States, and that promise is passed down through each generation. “You should see how everyone celebrates when notice of acceptance into a school or college arrives,” she said.

discussion of cultural contributions by Hispanics on Tuesday,

Luis Araya will preside over the program on Feb. 10. A Bolivian by birth, he mentions “assimilation” as a strong theme in the Latino community. “Everyone strives to become ‘American,’” he said. A resident since middle school years, Araya shares the story of a visit made to his hometown, La Paz. Touring the places of childhood, Araya turned a corner and found himself facing the United States Embassy with our flag overhead. A thought flashed across his mind: “There is my embassy and that is my flag.”

Araya insists that mere presence in the United States is a source of joy throughout the Hispanic community. In homelands to the south, immigrant Hispanics too often recall only social immobility, lack of schooling, corruption and fear of the government.