Marilena Leavitt preaches and teaches the basics of the Mediterranean diet to Culinaria teens. 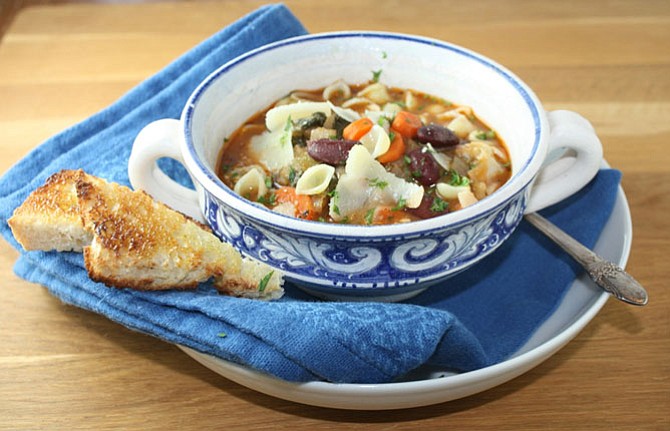 “Don’t be afraid of bread,” says Culinaria cooking instructor and chef, Marilena Leavitt. “Bread is a staple of the Mediterranean diet, one of the healthiest diets in the world.” Among her Mediterranean cooking classes is bread-making. Photo by Donna Manz. 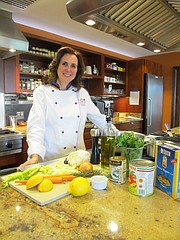 Greek-born, Italian-trained Chef Marilena Leavitt espouses the virtues of the Mediterranean diet at home, teaching kids’ cooking classes at Culinaria, or preparing home-cooked meals for her private clients. In the Culinaria instructional kitchen, Leavitt gathers the ingredients for a hearty winter minestrone. For her minestrone recipe, visit Leavitt’s blog at www.marilenaskitchen.com

”How to Feed a Growing Kid” sounds like the name of a Judy Blume tween novel. It’s not … it’s a mission that impassions professional chef Marilena Leavitt, mother of three, and Culinaria Cooking School’s kids’-cooking class instructor. It’s not enough to prepare healthful meals for kids; you have to make something healthful that they will eat. That’s what Leavitt teaches and espouses in classes and in life.

“When I teach teen cooking classes here [at Culinaria], parents say, ‘I can’t believe my kids ate such-and-such. How did you get them to try it,‘ or ‘I don’t know what to cook, my kids don’t eat anything.’ That’s why it’s important to prepare something new to expose kids to different flavors and foods. Sometimes, kids will try something new in the class because their peers are eating it.”

Leavitt infuses many of her Mediterranean dishes with the Greek “trinity” of seasoning --- oregano, lemon, and garlic. Oregano is to the Greeks what basil is to Italians, and tarragon is to the French, said Leavitt. Her grilled chicken kebabs marinated in these spices blended with olive oil is her kids’ favorite dish.

Occasionally, kids will come in to a class thinking, ‘I won’t like that,’ but when they see other kids around them eating it, they try it, said Leavitt.

She said that the parents are happy their children are expanding their palate. “That’s why I find the summer camps so rewarding.”

EDUCATED IN GREECE as an economist, Leavitt switched careers while living in Italy with her husband and children. She trained full-time in a culinary school in Rome and never looked back. “The food culture in Italy attracted me,” Leavitt said. “I wanted to learn more about Italian food and culture. The cuisine is so regional.” She continued her training in the U.S. at L’Academie de Cuisine in Maryland, and, moved to Vienna – permanently – about eight years ago. Leavitt’s children are 14, 18, and 20 years old now, and were exposed to new and ethnic foods throughout their lives. Leavitt said she has always tried to introduce a new dish to her family on a regular basis.

“I ask my kids every week what their favorite dish was,” said Leavitt. “If I get their seal of approval, it’s a keeper. It’s important the kids like what you serve.”

Bread, olive oil and lemon are not the only foods Leavitt does not shy away from. She believes in making extra quantities for another day and in recycling leftovers into something new. “There’s too much waste,” she said.

“Make the recipe your own … All kids have things they don’t like. They don’t have to eat everything. If there is something in a recipe they won’t eat, substitute something else.”

Leavitt calls herself a “firm believer” that recipes are for inspiration. They are suggested guidelines open for customizing. “Make the recipe your own,” she said. “All kids have things they don’t like. They don’t have to eat everything. If there is something in a recipe they won’t eat, substitute something else.”

Leavitt offers tips to make meal time – breakfast, lunch, and dinner – healthful, tasty, and enticing. A well-stocked pantry, she said, is “key” to spontaneous cooking. Grocery shop with the week’s dinners in-mind, not aimlessly. Freeze extra stew or make a pot of soup to call upon when time is short. Leftovers are a timesaver. If you don’t have time to prep vegetables and fruits daily, pick them up at a salad bar. Involve your teens in new dishes every week. “Empower them by teaching them basic cooking skills,” said Leavitt. “Ask them to cook something for the entire family.”

Leavitt’s blog centers on recipes, meal composition, and colorful, artistic photographs that inspire. At home, in classes and camps, and with private clients, she practices what she preaches. She partners fresh Mediterranean produce – fennel and oranges, for example - with herbs and olive oil. Her hearty winter minestrone has a splash of lemon juice to perk it up.

“The Mediterranean diet is all about moderation and does not exclude anything,” Leavitt said. “It’s healthy and appealing.”