Local students learn about the history and accomplishments of African-Americans. 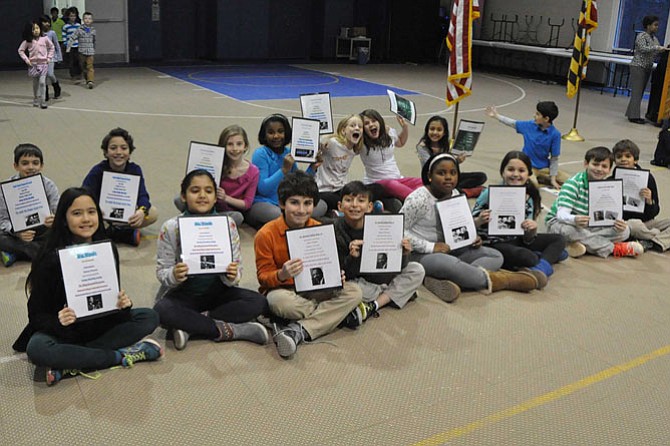 Students at Norwood School in Bethesda wrote poems modeled after Martin Luther King, Jr.’s “I Have a Dream” speech and recited them at a school assembly. Photo contributed

Fourth grade student Eli West crafted a poem this month that was modeled after Martin Luther King, Jr.’s famous, “I Have a Dream” speech. As part of February’s month-long celebration of the history and culture of African-Americans, fourth grade students at Norwood School in Bethesda, Md., wrote and delivered poems reminiscent of the speech that the famous civil right leader delivered in 1963. The students also delivered their verses before Norwood’s lower school community.

“I learned more about Martin Luther King, Jr. I learned that he was a very spiritual man,” said West.

The exercise was part of a broader lesson in honor of Black History Month, a time when students learn about the history of African-Americans as that history is incorporated in to the overall curriculum of many schools. From concerts to school projects, there are opportunities to join the month-long celebration.

“Black History Month is a time to honor the accomplishments of the African-American men and women who have made contributions to the world in spite of the injustice they faced.”

“Black History Month is a time to honor the accomplishments of the African-American men and women who have made contributions to the world in spite of the injustice they faced,” said Sandi Hannibal, Director of Multicultural and Ethical Education at Norwood School in Bethesda, Maryland. “One might ask why it is necessary to highlight these accomplishments in 2015. After all, we have lived through the Civil Rights Era and the Civil Rights Act was passed in 1964. We have a black president. We have made so much progress. All of this is true, but in some schools the contributions and accomplishments of African-Americans are not woven into the overall curriculum, so it is important that Black History Month provides an opportunity to learn about prominent African-Americans in a very intentional manner.”

Some educators are encouraging students to take time to ponder the history of African-Americans. “It’s more than just the Jim Crow Laws. There’re a whole host of things that African-Americans have done,” said Lisa Styles, school counselor at Arlington Public School’s Career Center in Arlington.

"Students at the middle school age are trying to learn who they are. We want to expose kids to the ideas of identity, inclusive behavior, and respect, and to let them know that what they feel matters," said KiKi Davis, St. Stephen's & St. Agnes School director of multicultural education, diversity, and equity initiatives. "We want to give them tools to become leaders in their own schools, and it starts with being able to talk about diversity and social justice issues at their developmental level. What it looks like to them, in their lives, at this age."

St. Andrew’s Episcopal School in Potomac, Md., hosted a regional diversity conference earlier this month called “Diversity in the DMV” Conference. More than 200 representatives from independent schools in the District of Columbia, Maryland and Virginia explored some of the tools needed for cross-cultural understanding.

The Mason Wind Symphony and Vocal Studies Students, Mason Spiritual Ensemble will join local church choirs and elementary school choirs in a performance of gospel, spirituals, jazz and original compositions. The concert is designed to honor the legacy of Martin Luther King, Jr. and other African-American leaders.