Vision for the Grange, Foust and Murphy re-elected, Exxon cleanup and more.

On March 7, about 75 members of the community celebrated renovations to the 1929 Great Falls Grange Hall building and grounds that made it accessible to all of Great Falls. 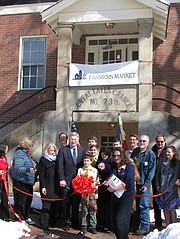 A few months later in October, Adeler and representatives from a dozen Great Falls organizations met to rejuvenate a commitment of making the Great Falls Grange the centerpiece of the community, as founding Great Falls farmers envisioned almost a century ago.

After learning that the park authority is willing to give the key to the Grange for the community to use, Adeler held the meeting to see if a consortium of community groups is ready to assume responsibility for managing the building and Old Schoolhouse for community use.

“The potential is extraordinary,” he said. The possible activities for community use, for youth, senior citizens, adults, artists, musicians, nonprofits and the entire community are “endless.”

During election season, GFCA during its debate, asked Foust his vision for the property.

“And eventually if the community groups come together the way I think they might and the way it was initially proposed, I see something more grand here.”

Supervisor John Foust (D-Dranesville) was re-elected and sworn in for a third term on Dec. 15, 2015, the first person to serve a third term in the Dranesville district in more than 100 years, according to Tony Castrilli of Fairfax County. Foust defeated first-time candidate Jennifer Chronis (R).

Del. Kathleen Murphy (D-34) was re-elected in a rematch with Craig Parisot (R). Murphy defeated Parisot by a final count of 10,820 votes to 10,632, less than one percent of voters in the 34th District.

The morning after the election, Parisot sent a legal team to observe a canvas held in Fairfax and Loudoun counties, which are represented by the 34th district, to ensure the election’s authenticity.

This election was a rematch of the special election triggered last November 2014 when Barbara Comstock (R) was elected to U.S. Congress.

Deer density is still at least two times greater than it should be in the Great Falls/McLean area, said Fairfax County Wildlife Biologist Dr. Katherine Edwards, citing a number between 15-20 deer per square mile as healthy for deer and the environment. Fairfax County recently used aerial and infrared technology to study deer population in county parks, she said early in 2015, including Scotts Run Nature Preserve, Riverbend and other parks around the county.

The Great Falls Citizens Association recently took the unusual step of surveying its residents about experiences with deer and opinions of what to do about it.

Part of the mission of the Great Falls Citizens Association is to preserve the semi-­rural nature of Great Falls. The Committee on Environment Parks and Trails, “observed that the next generation of our forests has in many places disappeared under pressure from deer herds, raising questions about the sustainability of our highly-­prized natural environment. … The objective was to seek residents’ views so that the GFCA could evaluate support for new initiatives to protect local woodlands and streams.”

Jerry Peters, a retired ecologist who lives in Great Falls, is spearheading a program in Great Falls to connect licensed, professional archers to homeowners who permit archery on their land.

For the past seven years, Peters has studied the deer grazing the understory of forests, the overabundance of deer in the Great Falls and Northern Virginia area, and the declining deer health because of the inability for the habitat to support the growing population.

A 125-pound deer requires approximately 6.5 pounds of forage per day, or some 2,370 pounds of vegetation per year, according to the Fairfax County Park Authority. Multiply more than a ton of vegetation by as many as 100 deer per square mile, and the resulting decimation of forest understory and suburban landscaping is not surprising.

"This is really deer heaven, and we have made it that way,” said Peters.

Planners and the landowner kept tweaking, even eliminating three houses from 23 in their their cluster development proposal, but Great Falls Citizens Association voted for a resolution to oppose rezoning and cluster development of the 52 acres of Brooks Farm off Springvale Road.

“The GFCA believes the property should be developed as a five-acre subdivision, perhaps in the Residential-Conservation “RC” Zoning Category,” according to the resolution passed in May.

“The common area, including the [Resource Protection Area] and the water dam, and upstream lowland, should remain privately owned, with development conditions, proffers and covenants imposed sufficient to ensure they will be properly maintained and cared for,” reads the resolution. “The County should require the best state-of-the-art stormwater management on every lot, plus best management practice water retention in the common areas.”

When first proposed, 1,400 Great Falls residents signed a petition to oppose the rezoning of Brooks Farm, which some call the heart of Great Falls.

The meeting was the third in 2015, and Basheer/Edgemoor-Brooks pitched the ideal of continued partnership and dialogue with the goal of reaching consensus before a final plan comes to the Fairfax County Planning Commission.

“Let me be as blunt as I can be,” said attorney Gregory A. Riegle, of McGuire Woods who represents Basheer/Edgemoore-Brooks, LLC. “We would not be able to meet the expectation of the landowner with five acre lots. There is an economic value to this that we have to balance.”

The Exxon cleanup in Great Falls continues. Despite ongoing efforts to remove the Methyl Tertiary Butyl Ether (MTBE) from the groundwater as a result of the leak from the former Exxon Station at 9901 Georgetown Pike, concentrations of the chemical remain more than 10 times the target level in at least one spot.

Approximately 256 pounds of MTBE have been removed since pumping and treatment began in August 2014, according to the Great Falls Citizens Association.

“We will keep being vigilant until the problem goes away,” said Glen Sjoblom, chair of the Great Falls Citizens Association’s special committee on groundwater contamination.

The special committee of the Citizens Association reviewed the groundwater monitoring report issued for second quarter 2015 by Fairfax Petroleum and its environmental engineering contractor, Kleinfelder East. The report was received from the Virginia Department of Environmental Quality.

GFCA and Sjoblom predict that pumping will need to continue for another year.

“After the end points are reached, monitoring will continue for another two years to verify no contamination will ever reach private groundwater wells in the vicinity of the commercial center of Great Falls,” according to the Great Falls Citizens Association.

Low level of MTBE can make groundwater undrinkable due to its offensive taste and odor, according to U.S. EPA documents.

“It doesn’t take a very big leak to cause a very big problem if you have an area that has private wells,” said Sjoblom.

The groundwater has been treated by pumping it out for air stripping and by charcoal filtration in a special treatment trailer, and the treated water is released below discharge limits to the storm drain.

The Virginia Department of Transportation hopes to begin construction on a $265 million project to widen Route 7 in 2021. VDOT will continue meeting with homeowner associations this fall to give details on the 6.9 mile project that will increase the width of Route 7 from four to six lanes between Reston Avenue and Jarrett Valley Drive.

The project will be split into two phases.

VDOT plans its next two-day Public Information and Open House Meeting on Jan. 8 and 9, 2016. A public hearing is tentatively scheduled for April 2016 and VDOT hopes for approval of the design from the Virginia Commonwealth Transportation Board to in the summer of 2016.

Safety concerns regarding access is still a major concern to neighborhoods along Route 7 corridor in Great Falls.