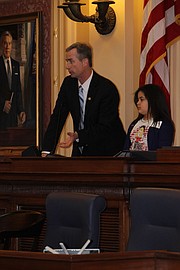 Del. David Bulova (D-37) (left) is joined by Marjori Rivera, in fourth grade at London Towne Elementary School in Centreville, who was acting as Student Speaker of the House.

HB1872: Would have required the Board of Education to arrange a special training program for principals working with struggling schools. The bill passed the House education committee but died in appropriations.

HB1667: An ethics bill that would cap all gifts to legislators at $100, whether tangible or intangible. Bulova’s bill was rolled into a similar bill from Del. C. Todd Gilbert (R-15), which retained the $100 cap core concept.

HB1515: Requires hospitals to provide new parents with information on safe sleep environments for their baby at their discharge.

HB1327: Would have permitted voters 75 and older, or disabled voters, to go to the head of the line on election day.

HB2041: Would have established an advisory council for identifying open education resources, helping prevent students from spending as much money on hard copy textbooks.

HB1668: Dealt with allowing students of different grade levels the opportunity for an “expedited retake” of their Virginia Standards of Learning (SOL) exam. The concept stayed alive as it was rolled into Del. Gregory Habeeb’s (R-8) HB1490.

HB2306: Establishes Achieving a Better Life Experience (ABLE) trust accounts for individuals and families with children to help them save for living and other expenses. This follows a ABLE Act Congress passed at the end of 2014.

HB1343: Requires that sexual assaults on college campuses be reported either by campus police or local law enforcement to the Commonwealth’s attorney within 48 hours of beginning an investigation. Filler-Corn’s bill was rolled into Del. Jimmie Massie III’s (R-72) HB1785.

HB1552 and 2046: Provide for fingerprinting, background checks and other regulations for child care providers. These bills were folded into a larger omnibus bill from Del. Robert Orrock (R-54), HB1570, of which Filler-Corn is a chief co-patron.

HB1539: Would have set up a Virginia Translational Medical Investment Fund for the state to make loans to private businesses doing research in translational medicine.

HB1445: Allows patients receiving treatment for epilepsy to legally possess and use a derivative of marijuana, provided they have certification from their doctor.

HB1503: Corrects a loophole allowing people to get out of a Driving Under the Influence charge, according to Albo.

HB1635: Deals with defamation over the Internet. If someone files an action within a year, they’re given a “reasonable” amount of time to find out who the people are that made anonymous defamatory statements.

HB2054: Any time a citizen receives a payment from the state, this bill would’ve required the state to offer a hard copy check option as well as electronic payment transfer. A similar bill did pass, one that only affects tax refunds.

HB2388: Would have forced a closer look at the 5-600 state prisoners sentenced prior to 1995, before there was no parole, releasing them if eligible based on their time served exceeding “the midpoint of the most recent discretionary sentencing guidelines.”

HB2158: Dealing with special elections, this would’ve regularized some of the arbitrary selection of dates to help reduce the cost of holding the elections themselves.

HB2372: Creates an electronic asset verification program for applications for medical assistance such as Medicaid. “This bill is needed so that we can help reduce some of the potential fraud in people seeking benefits,” said Sickles.

HB2056 and HB2062: Technical election administration bills, including a requirement on presidential election years for scantron voting machines to be available for every 4,000 voters in a precinct.

HB2339: Would have helped students access electronic textbooks by requiring schools to provide them with computers to use.

HB2337: Sought to require the Board of Education to include the dangers and legal implications of “sexting” in Family Life Education curriculum.

HB1684: Would allow students who achieved a certain score or above on Advanced Placement exams to waive taking the Virginia Standards of Learning test in the same subject area. The bill was rolled into other, similar legislation.

HB1764: (Chief co-patron with Del. G. Manoli Loupassi [R-68]) If a data provider sells, publishes or otherwise shares data about a person’s criminal background that has already been expunged, this bill strengthens the remedies available to consumers on the opposite end of the data provider.

SB957: Restricts license plate readers and use of other “spying technology” by the police when there’s no warrant or investigation pending. “It’s going to be a landmark law in Virginia establishing personal privacy,” said Petersen.

SB1008: Homeowners Association bill of rights, such as the right to notice of meetings and due process when a complaint is filed.

SB982: In cases of life-threatening drug overdoses, this bill would protect anyone who reports the situation from being prosecuted for possessing illegal substances themselves.

SB1274: Would have allocated more funds for re-paving secondary roads.

SB1295: Would prevent government officials from censoring sermons given by National Guard chaplains. This bill was folded into SB690.

SB1112: Would have provided for five and a half-hour school days for kindergarten students.

SB701: Requires the state to offer citizens the option to receive income tax return refunds as a check.

SB757 and SB900: Two bills that deal with the Virginia Standards of Learning tests: One allows middle school and elementary school students that were close to passing the test the opportunity for an expedited retake; the other gives schools flexibility on when they administer the tests. “This would allow curriculums and teaching to be more individualized,” said Barker.

SB1122: Helps set up a support network for suicide prevention among college students, universities and parents of students.

SB681: Three-year plan to raise the minimum wage to $10.10. “We’ll get that soon, said Marsden. The bill died in the Commerce and Labor committee. “Last year, the Republicans couldn’t look me in the eye.”

SB687: This bill would have imposed more regulations on legislator retirements, specifically if they were promoted to a new position in their last four years of service and received a pay increase more than 400 times their previous salary.

SB1391: Sought to create a procedural guarantee for Department of Corrections officers facing allegations that could threaten their job.

SB1235: Medical marijuana bill, specifically regarding the use of Cannabidiol oil and THC-A oil, very similar to Albo’s HB1445.

SB730: Deals with individuals serving a life sentence without parole for non-homicide crimes. The bill would give them a “meaningful and reasonable opportunity at release” through a four-judge circuit court review panel.

SB1390: Would help homeowners associations to hold elections despite failing to a obtain a quorum at meetings.

SB728: Would have given art instructors the opportunity to obtain a license for serving alcohol at private instructional events.

SB675 and SB 676: Regarding funding of a Northern Virginia Veterans Care Center, including allocating two sums of over $60 million from the federal government.

SB1032: Would reorganize Virginia alcoholic beverage control, getting rid of the ABC board in favor of a Virginia Alcoholic Beverage Control Authority.

SB903: Would set up a problem-solving court docket specifically to meet the needs of veterans, the mentally ill or people re-entering society. “There are so many that really do need some special attention because of their circumstances,” said Puller. “I hope it goes well.”