Pets connect owners to the wild world around them. 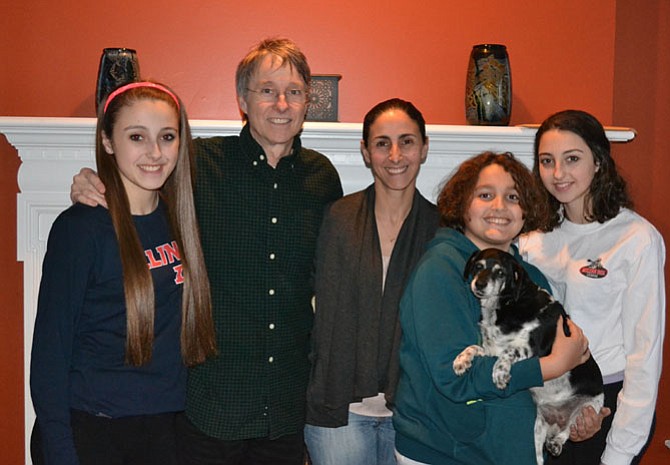 When it comes to pets, McLean is much like other communities. Our pets are pampered, doted on, and loved. And with good reason. According to these McLean pet owners, the unconditional love they give in return is immeasurable.

McLean’s Phillip Schneider was very clear. He did not want a pet. His three children, however, Peter, Sami, and Farah, did. Even his wife Fatima agreed with the kids. Needless to say, the Schneiders now have a loveable, and very loved dog.

Tibby is a short-legged, slightly roundish Beagle/King Spaniel mix who greets visitors with a full body-wag. She came to the Schneiders when Phillip popped into an animal shelter one day, sensing the inevitable. Tibby was not at the shelter that day, but they discovered her at a PetSmart adoption day in Fair Lakes soon after, seemingly waiting for the Schneider family to arrive.

“She fell in love with us the first time she saw us,” said Fatima. “I held her, and she did not want to let go. She just rested on my shoulder.”

“On the first day of school when they ask if you have any siblings, I always say I have two sisters and a dog,” said Peter. Sami and Farah agreed that she is a good “cuddle buddy.” The whole family enjoys the walks that Tibby has inspired, and the companionship she brings to the family. 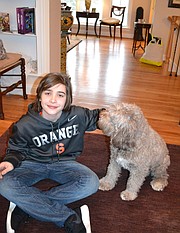 MCLEAN SIXTH GRADER, Greg Kopp, and his family got their labradoodle, Coco when she was 6 weeks old. Because the little blonde pup had recently undergone surgery, the Kopps would carry her up and down 14 stairs every time she needed to go out. Months went by, and she still never learned how to go up and down stairs. “She would just stand there waiting,” Greg’s mom, Carole Kopp laughed. The first time we boarded her, they couldn’t believe it, she said. “Needless to say when we picked her up, she knew how to go down the stairs.”

Coco is not so little anymore, but still just as lovable. She is soft and friendly, and follows her family around the house, especially if there is food involved.

Greg is an avid baseball player and spends quite a bit of time at the baseball field. So Greg’s mom often brings Coco along. “We’re always there,” she said. “I would bring her to practice and walk her and she couldn't wait to get off her leash and run.” She visits with the kids after practice, and loves to be chased.

One afternoon, one of the kids celebrated his birthday by sharing donuts with the team. Coco managed to snag at least a few donuts. If she could, she would surely say that the only thing better than baseball practice is baseball practice with donuts.

Several years ago, McLean ninth grader, Caroline Garcia, brought a small kitten home from the barn where she used to ride horses. They named him Zeus, and he fit in just fine with her family, which includes four kids, parents, and at that time, just one dog; a Bichon/poodle mix, named Junior. Since then, the Garcia family has rescued a third pet. This time, a small golden mixed-breed named Lily.

The pets all get along great, with a surprisingly small amount of discord. Junior often eats Zeus’ cat food. Zeus waits patiently for Junior to finish. And from the looks of it, they both are getting ample nutrition. Meanwhile, Caroline’s siblings have come home from school to find Lily with a dog treat bag over her head, having scarfed a fair share of those.

These resourceful pets have found a loving home with the Garcias. The Garcias appreciate their pets too. “They keep you company all the time,” said Caroline. “They’re always there for you.” 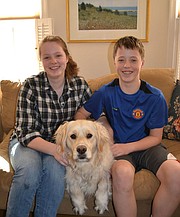 Sixth–grader, Jack Leahy and his eighth-grade sister, Katherine, are driven to McLean’s Langley School each day by their 2-year-old golden retriever, Sadie. Actually, their mother, Kristin does the driving. But Sadie is such a well-known part of the ritual that one can almost picture her buckled in with her paw on the passenger-seat armrest. “Her favorite thing is to ride to school,” Kristin said. “She gets depressed on the days she can’t go to school.”

One of Sadie’s other favorite things is what her family calls “shinys.” Sadie loves shiny reflections on the wall; especially those that reflect off of a computer screen, or come from a flashlight. She seems determined to one-day catch one.

Sadie loves “shinys” so much that Katherine’s science fair project involved constructing a self-walking dog machine. Katherine made a dog-friendly contraption that would shine tiny light beams in front of the dog. Theoretically, Sadie would wear it and follow the lights. But when she tried it, she was so mesmerized that she just stood at attention, focused on the “shinys.”

WITH HER IN THE FAMILY, “it’s hard to get bored,” said Jack. She loves to play with rocks, and “oinks” when she’s especially happy. “She’s highly entertaining,” her mom said. “We call it fluff therapy.”

McLean residents Lois Lefkowitz and her husband, Paul Schneider have fostered many dogs. Lefkowitz has been a volunteer for Homeward Trails, a local rescue organization, for nearly ten years. Her two dogs are rescues. Both are mixed-breeds, and both started out as foster pets.

Ren is a very friendly hound mix. He was rescued from an animal-hoarding situation where he lived with an astounding 300-plus dogs. Lefkowitz met Ren and agreed to foster him. He was shy, but she said it didn’t take long for him to gain confidence. He loves people, especially women, and other dogs. “He’s not the smartest in the pack,” she said. “But he’s a really sweet boy with a really good disposition.”

Jacques is a fluffy mixed-breed. Lefkowitz said she is often asked what he is, but she and her husband just don’t know. They simply refer to him as a “big scruffy.” He is a “very happy affectionate dog,” she said.

As a volunteer, she worries about the number of homeless animals that are euthanized each year. But she is also encouraged by the fact that the number of people who adopt rescue pets has grown slightly, and that more pet owners spay and neuter their pets.

One thing that all of these McLean pet owners agree on is that pets are a wonderful addition to the family. “It’s a connection to nature and the wild world around you,” Lefkowitz said. “They’re lovely to have.”