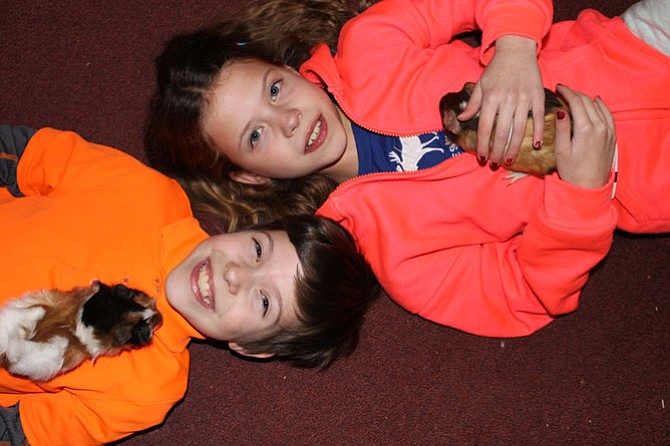 Rose and Gloria Boos, of Great Falls, with their guinea pigs Cuddles and Warriors. Photo contributed 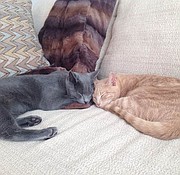 Our readers' photos of their pets.

On the night of Wednesday, Jan. 28, a cat invited itself into the home of a McLean resident, bringing with it a mystery spanning several months and almost a hundred miles. An ODAHC client watched with awe as a friendly black cat with a white chest, or "Tuxedo" cat, walked in through her garage and made itself at home. When she saw that her visitor was sneezing, had an infection in both of its eyes, and was suffering from a recent puncture wound through its ear, the kind-hearted client knew she had to take action: she called and made an appointment.

During the visit with Dr. Andrea Newman, the cat was scanned, a routine procedure for stray animals, to ascertain whether it had a microchip. The results shocked both the staff and the client who brought in the cat: the microchip database company notified them that the cat, named "Rhudy," had been reported as missing since May of 2014. Even more astonishing was that the cat had disappeared in Edinburg, Va., a town situated over 90 miles from the client's home in McLean. The animal hospital placed phone calls to all four of the numbers provided by the microchip database, but only one still worked. A voice on the answering machine mentioned the name "Penny," matching the name of the owner as provided by the microchip database company.

MICROCHIPPING PETS is a practice that has reunited tens of thousands of pets with their owners since its inception. The simple procedure involves injecting a tiny, glass-encased radio frequency transponder under the skin between the shoulder blades of the animal. When a lost pet is brought into an animal shelter or animal hospital, the staff uses a special scanner to read the microchip. The hospital staff can then call a national pet microchip database, which stores contact information for pet owners, and enables animal shelters and hospitals to give owners the good news about their pets. While Rhudy had been fitted with a microchip that would allow him to comply with the travel regulations of almost any country in the world, he needed the microchip simply to get home.

Despite its obvious medical issues, the cat appeared to be surprisingly clean and well-fed. After a thorough examination, Newman administered an injection of long-lasting antibiotics to treat the animal's respiratory infection and ear, and prescribed an appropriate medication for its eyes. Having pets of her own that might become ill if they came in contact the visiting cat, the Good Samaritan left Rhudy in the care of the staff at the animal hospital.

That night, after the hospital had closed and the night nurse was caring for Rhudy, Penny Nixon left her own voicemail on Old Dominion Animal Health Center's answering machine. With a voice filled with emotion, she said, "I got your message. . . . you don't know how much this means to me!" She called again as soon as the animal hospital had opened the next morning, and told hospital staff that she was on her way up from her new home in Galax, over 300 miles from McLean.

Nixon told Old Dominion staff that she had gotten Rhudy when he was a kitten, after hearing his plaintive mews while cleaning up after a yard sale. Now a 10-year-old cat, Rhudy had always been a homebody, Nixon explained, until they moved to a new home, whereupon he demanded to go outside. He was let out, and was last seen walking over a nearby hill.

THE CAT gazed placidly into Nixon's face as she approached the medical isolation room in which he had stayed at the hospital, and allowed himself to be petted. "Hi, Rhudy!" she exclaimed. "He recognizes me," murmured Nixon, while caressing his thick, black fur. Alluding to how the microchip had made it possible for her to be reunited with her beloved pet, she said "Now I have to get my other cat microchipped!"

It was a joyously tearful reunion, thanks to a microchip and a phone call. The question remains, however: how did Rhudy end up 90 miles away from his home? Hospital staff members guessed that Rhudy might have jumped into a home contracting van and fallen asleep, jumping out once he arrived in Northern Virginia. Only Rhudy knows the full story, and he shows no indication that he will ever tell: after his 9-month odyssey, he is simply content to be once again in the arms of his owner. Dr. Newman underscored the importance of that tiny microchip: “He’d never have made it home without it.”