'Animals Are So Resilient'
Votes

'Animals Are So Resilient'

AWLA and SPCA help pets and their families in the Arlington area. 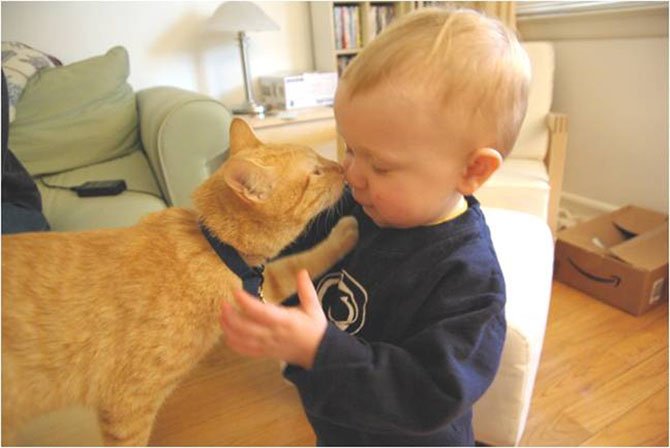 The Baby Ready Pets classes offered by the Animal Welfare League of Arlington help pet owners and future parents prepare their pets for welcoming a new baby into the home. Contributed 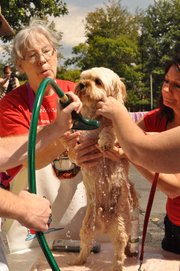 Arlington — One of the top reasons couples donate their pets to an animal shelter is because they are expecting a new baby. Animal Welfare League of Arlington tries to prevent that from happening by offering a Baby Ready Pets class.

"The class is for people to prepare themselves, their home, and their animals for introducing a baby to the home," Kerry McKeel, AWLA communications manager, said. "It includes behaviors they can watch for in their animals, and acclimating them to sounds associated with a new baby." Couples walk away from the class with a CD of sounds that they can play in the house in the weeks leading up to the arrival of a new baby.

That is only one aspect of the work AWLA does for animals and their families in northern Virginia. AWLA provides animal adoption programs to the D.C. metro area and rescue services to Arlington County. McKeel estimated that 3,000 companion animals benefit from the shelter each year, and that 92 percent of the animals AWLA takes in are either adopted out to new families or reunited with their former families.

Last year, AWLA took in 1,1618 animals and adopted out 1,136, said McKeel. One of those animals the group took in was a cat named Delilah. Delilah had previously belonged to a boy who had had anxiety issues. The boy's mother gave him the cat to help relieve him of his anxiety, and when the boy grew up and moved to college, where he couldn't take Delilah with him, he decided she needed a chance to help another family who needed her.

Delilah is currently up for adoption through AWLA.

In partnership with Arlington County, AWLA also has a disaster relief trailer which will provide care for companion animals in the event of a natural disaster. "The trailer was an outcome of Hurricane Katrina," McKeel said. "We would set up and work in conjunction with a human relief center in case of something like that, and our trailer would be dedicated to companion animals. That way, people wouldn't not leave their homes for fear of abandoning their pets."

On a smaller scale, AWLA offers a safekeeping program which will take care of pets for two weeks if a family is going through a hardship like a house fire, according to McKeel. This allows for a pet to be taken care of while a family puts the pieces of their life back together, and the service is available to residents of Arlington and Falls Church.

AWLA is a county shelter and provides animal control services. McKeel said that when animal control officers catch stray animals, they always scan to see if the animal has a microchip with the owner's contact information embedded in them.

"Our officers came across an animal listing in Florida," McKeel said. "The pet had originated here, and they were able to find the missing owner via microchip."

McKeel said that while people have their information on a pet's microchip when first adopting the animal, oftentimes they forget to update the information if the family moves. "So it's no good," she said. "It requires a lot of digging, but our officers are really good at that."

The Society for the Prevention of Cruelty to Animals of Northern Virginia (SPCA NOVA) is a rescue group based in Arlington whose primary goal is to rescue stray and abused animals.

"We were founded by our licensed humane investigator, Edith von Stuemer," said SPCA President of Board of Directors Dana Meeker. "Sometimes, a person would rather give up their animal than go to court. We rehabilitate animals, take care of their medical conditions, and adopt them out." Meeker said that the group also helps local shelters when they need help housing animals.

SPCA is a foster-based rescue that houses cats in foster homes and dogs at the non-profit kennel Ragged Mountain Dogs in Sperryville. Last year, the group cared for 339 animals and found homes for 220, according to Meeker. So far in 2014, SPCA has placed over 115 animals in homes.

SPCA NOVA was founded in 1994 and merged with Spay Inc. about 10 years later, according to Meeker. Spay Inc. has a network of veterinarians who offer spaying and neutering at a discounted cost, and recipients of the service don't have a required income level, said Meeker.

Because SPCA takes in animals that are stray and abused, the group, which is composed mostly of volunteers, takes care of animal medical needs. "Last year, we received a call about a feral cat who had a broken leg from being hit by a car," Meeker said. "We had to amputate the leg. Then we got a call about a kitten with a broken leg, and it had to have surgery."

Meeker said that SPCA gets a lot of cases where a cat has eye damage from a severe ear infection. One of the group's cats, Miracle, had to have one of his eyes removed because of an ear infection he had as a kitten.

"Animals are so resilient," Meeker said. "They don't realize they're missing an eye or a leg. They just go on with life."